old post
How ‘Bapuji’ and ‘Chacha’ Nehru made way for Babasaheb in my life
August 12, 2019

Cartoonist and scholar Unnamati Syama Sundar grew up in Vijayawada on a diet of Calvin and Hobbes, Dennis the Menace, Chacha Chaudhary and Amar Chitra Katha. Raised on stories about ‘Bapuji’ and ‘Chacha’ Nehru, he was to discover Babasaheb Ambedkar only in his university life, especially in Jawaharlal Nehru University in Delhi. The following is an excerpt from the Introduction to his just-published book No Laughing Matter: The Ambedkar Cartoons, 1932–1956.

The smooth insult and the Parthian shot

Dr B.R. Ambedkar had always been a distant name for me growing up. All I knew about him was that he had done some­thing good for dalits. During my schooldays in Vijayawada in the 1990s, I was quite familiar with ‘Bapuji’ and ‘Chacha’ Nehru, who were an integral part of our school syllabus. Ambedkar was never heard of in the classroom, not even in the social science class. Because of my familiarity with Gandhi, in Class XII, I bought his autobiography, The Story of My Experiments with Truth, for Rs 20. It was largely boring; except for the famous South Africa episode of his being removed from the train car, the book held little interest. At home, I frequently heard about Lenin and Marx since my father was very active in the Communist Party of India, but never Ambedkar. The pattern continued in college. I entered the Andhra Pradesh Residential Degree College in Nagarjuna Sagar, a social welfare college meant for dalit and adivasi students, and here too the name ‘Ambedkar’ was seldom heard. When I went to Pondicherry University for my M.A. in 2002, one of my friends told me to read the writings and speeches of Ambedkar. He said Ambedkar had a solution for all the social and political problems India was faced with. I then bought a copy of Annihilation of Caste in Telugu. It had been translated by Bojja Tarakam, renowned lawyer, civil rights activist and Ambedkarite. Initially, I did not understand Ambedkar’s argument—probably it was too scholarly for me then.

I had a flair for drawing since childhood. In Pondicherry University, one of my teachers offered a paper on print media and communication. As part of the course, students were expected to produce a tabloid. For this I was asked to illustrate a few articles. Later, in 2004, when I joined Jawaharlal Nehru University for an M.A. in history, I met Anoop Kumar, my senior, who had founded Insight, a bimonthly journal of the Ambedkar Study Circle on campus. I started contributing cartoons to Insight and to other campus magazines. Even then, my interest in Ambedkar remained fleeting. I registered for an MPhil on colonial-era Indian cartoons, with a focus on the Telugu language. During my archival research, I chanced upon cartoons on issues of social reform, caste and Untouchability. For instance, see figures 1–4. The first is a cartoon from 1930 credited to ‘Sri K. Bashyam garu’, a reform-minded Gandhian brahmin whose byline appears with brahmanic prefixes and suffixes in place, in the satirical comic magazine Chitragupta, influenced by Punch, that was published from Madras. The title in Telugu is “Antaranitanamu”, meaning Untouchability. The second, from the same magazine, by Vasu (whose cartoons on Ambedkar in Dawn and Pioneer feature in this book), is likely a reproduction from an English language source. Often, Telugu newspapers and journals translated and used cartoons from other languages. Figure 3, signed in Hindi by Vishwa Nath Singh, features a wily brahmin with a poor client with this caption: ‘When it comes to earning money, Untouchability is not an issue’. Figure 4 is a toon on Hindu–Muslim unity by S. Brahma which made it to the cover of Chitragupta in 1937. It says, bitingly: ‘They wouldn’t agree upon anything, but on the issue of child marriage there’s such concord.’ 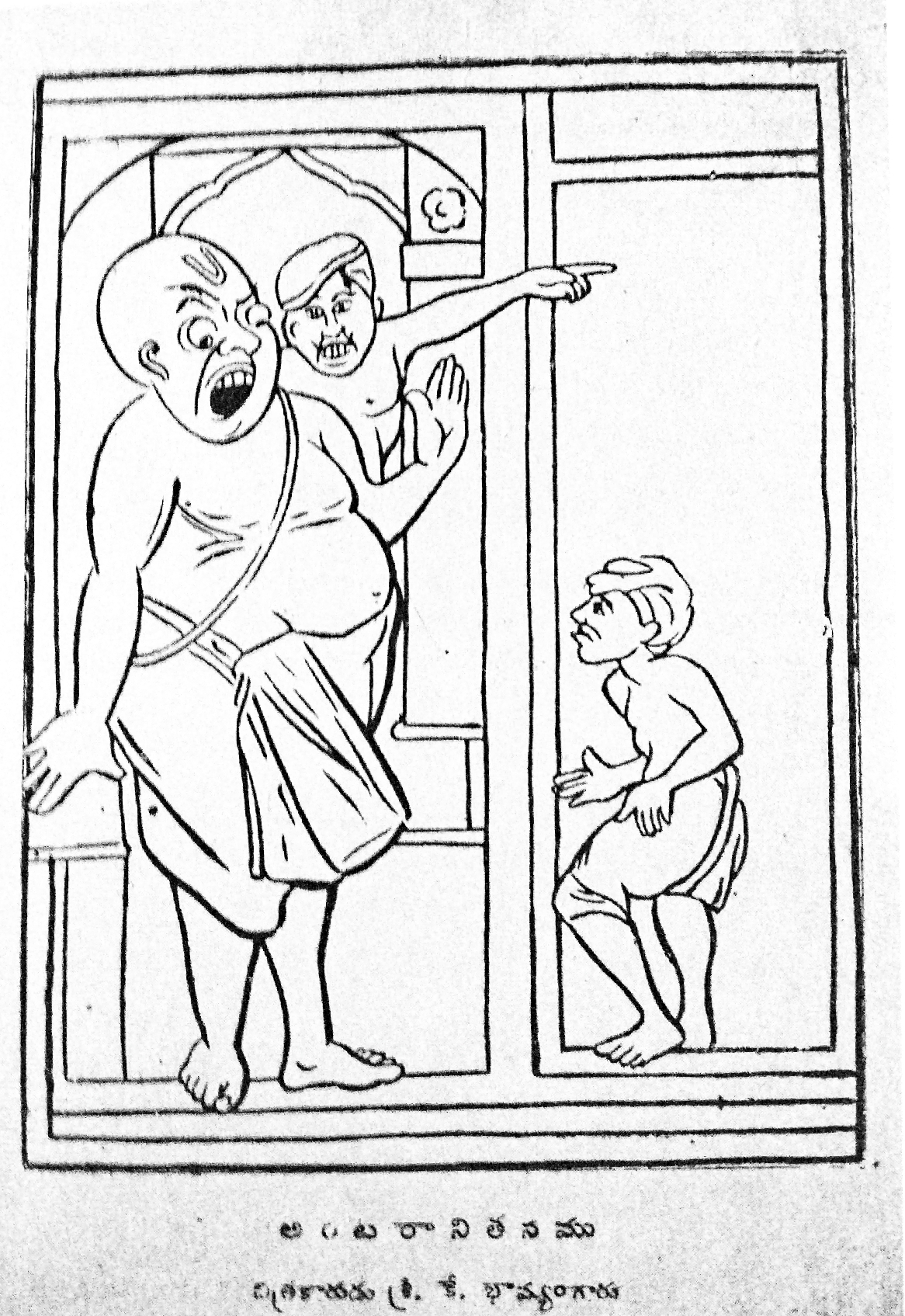 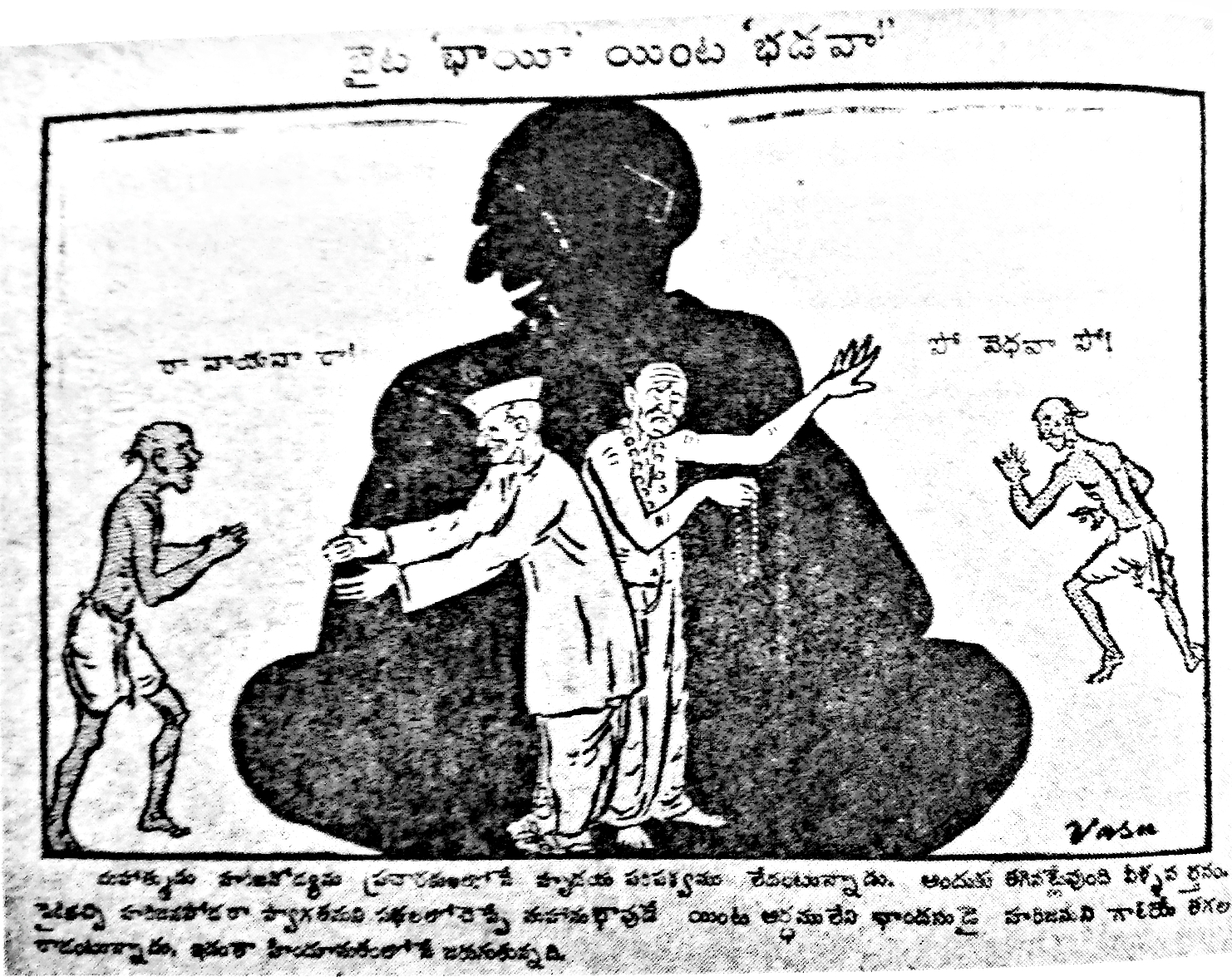 Figure 2: In public they call a Harijan 'brother', in the privacy of their homes they say 'wretch': The Mahatma says among his followers there's no true change of heart. All this is happening within Hinduism. 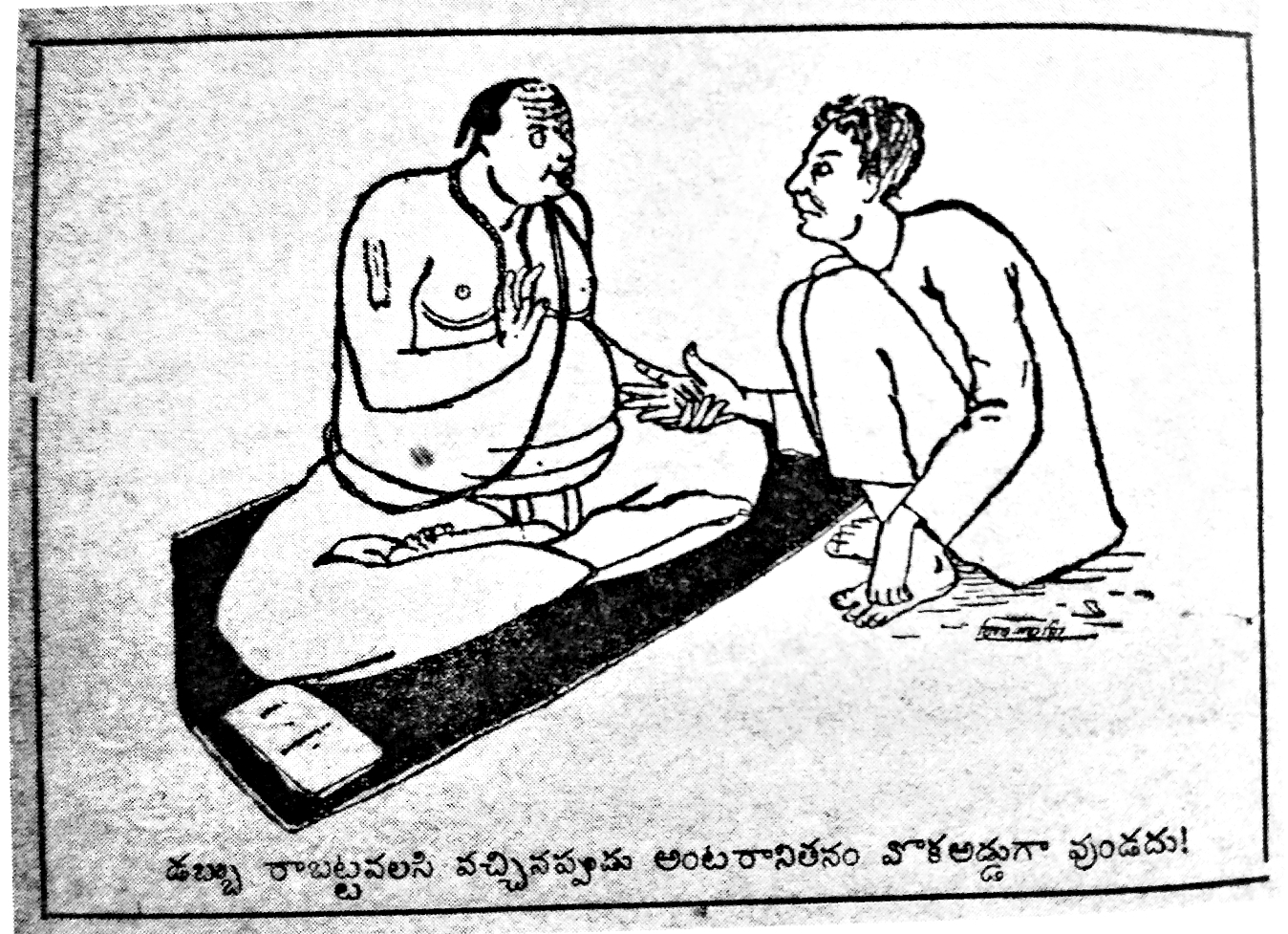 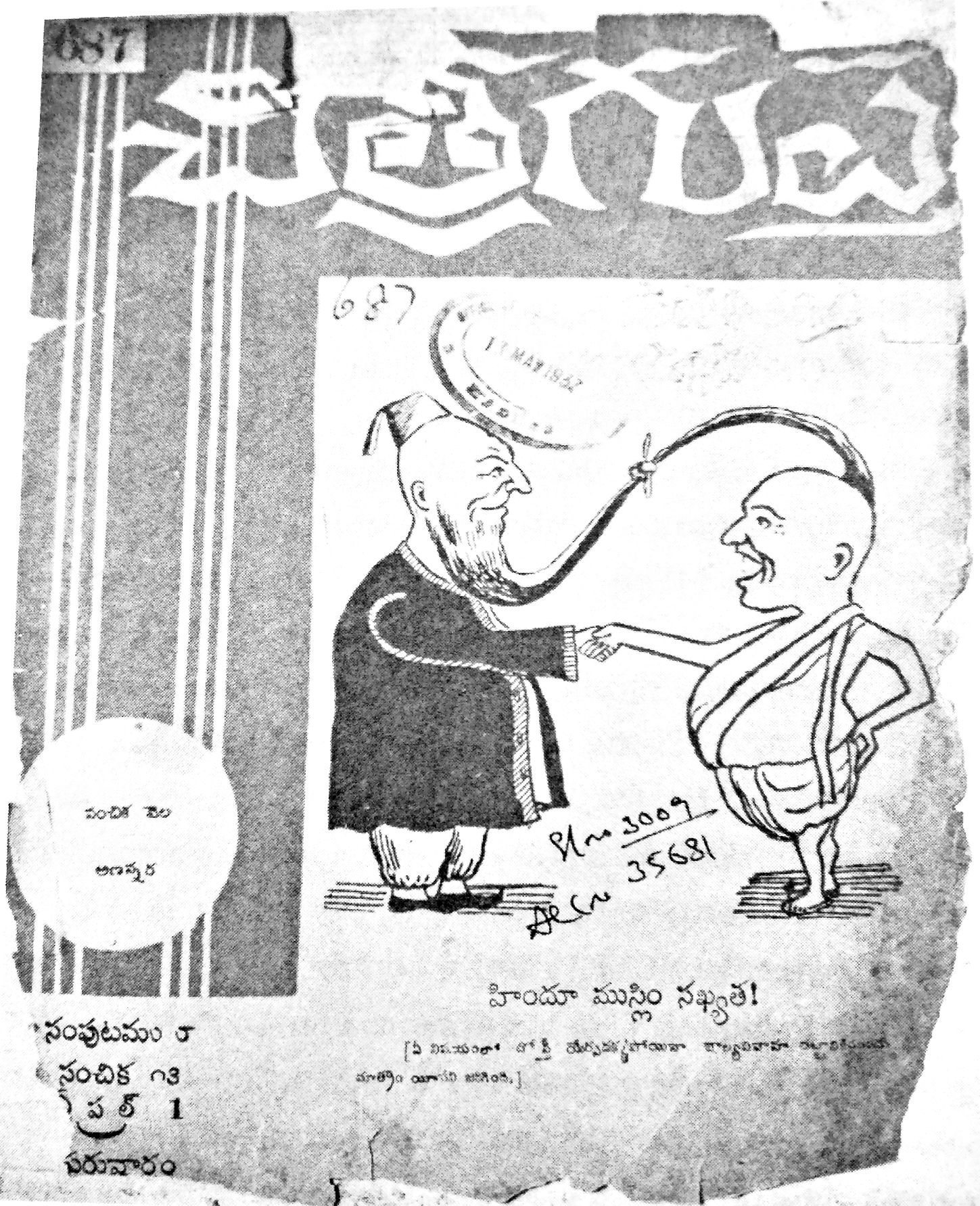 My MPhil dissertation, “Visual Expressions of Nationalism and Sub-Nationalism: Cartoons in Colonial Andhra, 1913–1953” (2009) made me realise how cartooning as a form was used to address social issues. When an external examiner rejected my thesis and wrote a negative report, I began drawing furiously on issues of caste and discrimination that haunted me even in the university. I shared these mostly with likeminded friends in JNU. But with time, many of them left the campus for greener pastures. Facebook became a way of staying in touch. Friends who missed seeing my cartoons suggested that I post my work online. With this, the audience for my work grew wider. Soon, Ambedkarite websites like Round Table India began featuring my work.

When news broke in April–May 2012 of the controversial Ambedkar cartoon in the Class XI social sciences textbook published by NCERT—a reprint of what K. Shankar Pillai had originally published in Shankar’s Weekly on 28 August 1949—it was not the first cartoon related to Ambedkar that I had seen. Working on my MPhil, I had chanced upon a cartoon of him drawn in 1933 in Krishna Patrika, a Telugu newspaper. It was in fact a reprint of Shankar’s cartoon, “The towel, tar-brush and the hammer”, originally published in Hindustan Times (17 February 1933), featured now in this book (p.65). Even then, I had no inclination to investigate and research all the other cartoons on or around Ambedkar.

Following the NCERT cartoon controversy, the committee headed by Sukhadeo Thorat, former chair of University Grants Commission and then chairman of Indian Council for Social Science Research, was set up to review the textbooks. The committee summoned several subject experts. When S. Anand of Navayana was approached, he suggested my name since he was familiar with my work. We both attended just one meeting in NCERT’s Delhi office, had some tea and biscuits, and remained observers. When I saw how a single cartoon was being intensely debated, it occurred to me: why not look at all the other cartoons in which Ambedkar figures.