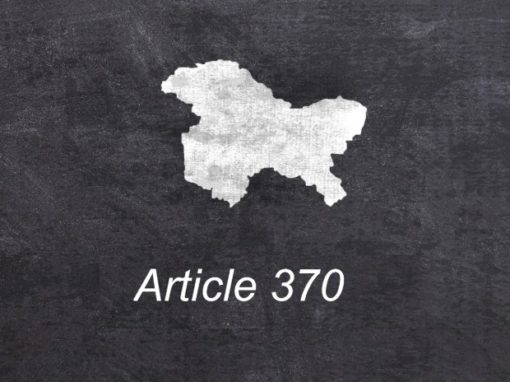 In this post, I will attempt to break down the constitutional changes to Article 370, and highlight some key legal issues surrounding them. In essence, to understand what has happened today, there are three important documents. At the heart of everything is Presidential Order C.O. 272, which constitutes the basis for everything that follows. The second is a Statutory Resolution introduced in the Rajya Sabha, which – invoking the authority that flows from the effects of Presidential Order C.O. 272 – recommends that the President abrogate (much of) Article 370. The third is the Reorganisation Bill, that breaks up the state of Jammu and Kashmir into the Union Territories of Ladakh (without a legislature) and Jammu and Kashmir (with a legislature).

To understand the legal issues, we need to begin with the language of unamended Article 370. Article 370, as is well known, limited the application of the provisions of the Indian Constitution to the state of Jammu and Kashmir. Under Article 370(1)(d), constitutional provisions could be applied to the state from time to time, as modified by the President through a Presidential Order, and upon the concurrence of the state government (this was the basis for the controversial Article 35A, for example). Perhaps the most important part of 370, however, was the proviso to clause 3. Clause 3 itself authorised the President to pass an order removing or modifying parts of Article 370. The proviso stated that:

Provided that the recommendation of the Constituent Assembly of the State referred to in clause (2) shall be necessary before the President issues such a notification.

In other words, therefore, for Article 370 itself to be amended, the recommendation of the Constituent Assembly of J&K was required. Now, the Constituent Assembly of J&K ceased functioning in 1957. This has led to a long-standing debate about whether Article 370 has effectively become permanent(because there is no CA to give consent to its amendment), whether it would require a revival of a J&K CA to amend it, or whether it can be amended through the normal amending procedure under the Constitution.

C.O. 272, however, takes an entirely different path. C.O. 272 uses the power of the President under Article 370(1) (see above), to indirectly amend Article 370(3), via a third constitutional provision: Article 367. Article 367 provides various guidelines about how the Constitution may be interpreted. Now, C.O. 272 adds to Article 367 an additional clause, which has four sub-clauses. Sub-clause 4 stipulates that “in proviso to clause (3) of Article 370 of this Constitution, the expression ‘Constituent Assembly of the State referred to in clause (2)” shall read “legislative Assembly of the State.”

This is very clever. Is it legal? One serious objection is Article 370(1)(c). Article 370(1)(c) (unamended) stated that “notwithstanding anything contained in this Constitution, the provisions of Article 1 and this Article shall apply in relation to that State.” This is absolutely crucial, because it makes clear that the power of the President to amend provisions of the Constitution in relation to J&K does not extend to Article 1 and “this Article”, i.e., Article 370 itself. 370(1)(d) makes it even clearer where it refers to the “other provisions” of the Constitution that may be altered by Presidential Order (and this is how the present Presidential Order is different from previous ones, such as those that introduced Article 35A). Article 370 itself, therefore, cannot be amended by a Presidential Order such as C.O. 272 (the one exception was a clarificatory amendment, which is not analogous to this one).

Now, it may be immediately objected that C.O. 272 does not amend Article 370: it amends Article 367. The point, however, is that the content of those amendments do amend Article 370, and as the Supreme Court has held on multiple occasions, you cannot do indirectly what you cannot do directly. I would therefore submit that the legality of C.O. 272 – insofar as it amends Article 370 – is questionable, and as that is at the root of everything, it throws into question the entire exercise.

There is a second important point to be noted here. C.O. 272 says – as it must – that the concurrence of the government of the state of Jammu and Kashmir has been taken. However, Jammu and Kashmir has been under President’s Rule for many months now. Consequently, actually, the consent is that of the Governor. However, there are two serious problems with basing C.O. 272 upon the consent of the Governor. The first is that the Governor is a representative of the Central Government – like the President. In effect, therefore, Presidential Order 272 amounts to the Central Government taking its own consent to amend the Constitution.

There is, however, a more important issue. President’s Rule is temporary. It is only meant to happen when constitutional machinery breaks down in a state, and an elected government is impossible. President’s Rule is meant to be a stand-in until the elected government is restored. Consequently, decisions of a permanent character – such as changing the entire status of a state – taken without the elected legislative assembly, but by the Governor, are inherently problematic. Formally, they may be within the bounds of legality; however, as the Supreme Court held in D.C. Wadhwa, on the question of re-promulgation of Ordinances, formal legality can nonetheless, in effect, amount to a fraud on the Constitution. Using the Governor to sign off on a Presidential Order that fundamentally alters the constitutional character of a federal unit appears, to me, to be straying dangerously close to the constitutional fraud line.

For these two reasons, therefore – first, on the indirect amendment of Article 370(3) proviso via 370(1), and secondly, on the use of the Governor as a substitute for the elected assembly in a matter of this kind – I would submit that there are serious legal and constitutional problems with Presidential Order C.O. 272 – which, of course, forms the basis of both the statutory resolution and the Reorganisation Bill.