old post
Statement by the Lawyers Collective on CBI raids on its office and homes and offices of Ms. Indira Jaising and Mr. Anand Grover
July 12, 2019 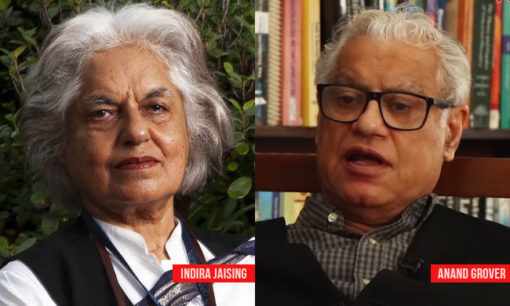 The Lawyers Collective and its Trustees, Ms. Indira Jaising and Mr. Anand Grover, express shock, anger and indignation on the simultaneous raids carried out by the CBI on 11 July 2019 at their offices and residences in Delhi and Mumbai. The searches, which went on past mid-night at our Mumbai office, were purportedly in relation to the alleged violations of the Foreign Contribution Act, 2010 (FCRA) by the Lawyers Collective, appellate proceedings in relation to which are pending before the Bombay High Court since 2017. The CBI’s actions are illegal, mala fide and a blatant abuse of law. In January 2016, a team deputed by the Ministry of Home Affairs (MHA) had conducted an inspection of the accounts and records of the Lawyers Collective over 5 days. They were authorized to exercise powers of seizure of accounts and records as well as call for documents and examine persons acquainted with the facts of the case. Under the FCRA, such powers can be exercised if the inspecting officers suspect any violation of the FCRA or any other related law. No such powers were exercised by the inspection team at the time. The Lawyers Collective had fully co-operated with the FCRA authorities and handed more than 1,000 pages of documents on request. The FCRA authorities did not think it fit to initiate criminal proceedings at the time of inspection or even later, after cancellation of the Lawyers Collective’s registration in 2016. Since the registration of the FIR against the Lawyers Collective on 13 June 2019, its functionaries and office bearers have been available at their respective stations to provide any information or documents that the CBI may require. However, the CBI did not even bother to approach the functionaries, let alone issue summons, as mandated by law. Instead, it proceeded to search their professional and residential premises, contrary to law. Yesterday’s raids by the CBI in relation to the very same FCRA documents, which the MHA had inspected and taken copies of 3 and ½ years ago. The CBI could well have summoned the documents but they took the action to raid and humiliate Ms. Indira Jaising and Mr. Anand Grover. The CBI’s actions are totally unwarranted, illegal and amount to gross abuse of the process of law. Worse still, the CBI issued a press release even as the search was going on in the Lawyers Collective’s Mumbai office. The events only reconfirm the malicious nature of the FCRA proceedings against the Lawyers Collective and its functionaries. The FIR and the raids carried out are nothing but a vicious means to humiliate, intimidate and silence its Trustees, Ms. Indira Jaising and Mr. Anand Grover, whose fierce independence and advocacy for human rights, perturbs the political establishment of the day. The arbitrariness and mala fide intent of the Government is further revealed by the fact that the MHA has cancelled the registration of 18,867 NGOs under the FCRA, 2010. None of them have been subjected to any criminal prosecution. The Lawyers Collective has been targeted because of the nature of cases that Ms. Jaising and Mr. Grover have taken up in their professional capacity, including those against the leading figures of the ruling dispensation in various sensitive cases. The premises raided today include lawyers’ offices, which retain professional and privileged communication between advocates and clients including those stigmatized because of HIV or other status. The CBI raids are improper and deplorable, on this count too. The Lawyers Collective will take appropriate action against these unlawful and vindictive actions, in accordance with law.