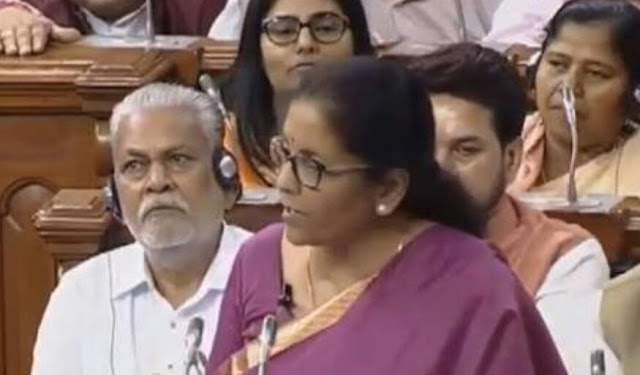 In her budget speech the Finance Minister quoted Swami Vivekananda to state, “There is no chance for the welfare of the world unless the condition of women is improved. It is not possible for a bird to fly on one wing”. She boasts that her government has provided adequate opportunities for women to develop and provide livelihood opportunities.

However, this statement of the Finance Minister is hollow and full of half-truths if it is seen in the context of the current ground realities. As the post-election Periodic Labour Force Survey, 2019-20, confirmed, women’s employment has been at an all-time low and is driven by the agrarian distress within the country.

This was reflected in the overall growing job crisis as well as the inability of the government to respond to the drought situation within the country. It is significant that this budget comes at a time when more than 500 million people are battling drought and there is a severe water crisis in all urban and rural centres of the country. Seen in this context, it is obvious that the Union Budget should have increased public expenditure to boost the rejuvenation of the agrarian sector which has seen a massive displacement of women’s livelihood.

The allocation for the Ministry of Women and Child Development has decreased from 5.1 percent to 4.9 percent of the total expenditure between 2018-19 (revised estimate) and 2019-20 (budget estimate). All the purported ‘good intentions’ of the government to benefit women are therefore not backed by its actions.

It is important to note that even within this budget, the expenditure on Centrally Sponsored Core schemes like Mahatma Gandhi National Rural Employment Guarantee Scheme or MGNREGS (whose allocation has come down by Rs 1,000 crore), schemes for social assistance and for the welfare of Scheduled Castes (SC), Scheduled Tribes (ST) and minorities has seen a slight decrease of 2.9 percent from the fiscal year 2018-19. This is reflective of the orientation and thrust of the government policy which is not geared towards arresting the trend of increasing inequalities.

Further, the share of other core schemes in the expenditure has come down marginally from about 9 percent to 8.9 percent. The scheme for the pension to widows (which falls under the National Social Assistance Programme) has seen a decline in funding, as has the public funding to the Pradhan Mantri Awas Yojana.

Food subsidy has gone up by approximately 7.1 percent, but this may not be enough to even cover the cost of inflation which is likely to rise after post-budget impact on petrol and diesel prices. There is also an increase for the much touted Ujjwala Yojana, but its shortcomings are not addressed.

One of the central features of this budget is the liberalisation of the financial markets, which will make women vulnerable to non-banking finance corporations. It is well known that such financial companies charge high interest rates from women and put them in a debt trap.
The budget projects women as a fertile market for such companies by stating that one woman in every Self Help Group (SHG) will be given Mudra loan of Rs 1 lakh (most of which are administered through small banks and Non-Banking Finance Companies or NBFCs).

But the budget does not say anything about giving interest free loans to SHGs. It also recapitalises public banks to service these NBFCs so that they can give credit to women. In this sense this budget marks a new stage in the integration of women into financial markets, making them more vulnerable to corporate sharks.

It is also significant that a budget that should have helped the rehabilitation of farmers’ families, who are experiencing distress, is actually providing micro-finance companies incentives to exploit women. The slight increases in the National Rural Livelihoods Mission need to be seen in the context an attempt to boost the demand for credit by women.

The expenditure on major initiatives impacting women like the Integrated Child Development Scheme (ICDS)and the Midday Meal Scheme have hardly seen any significant expansion or increases, and the rise in allocation is only likely to meet the increasing cost of implementation.

The maternity benefit scheme has seen an increase of Rs 100 crore, and most significant rise in health expenditure is on health insurance. The National Scheme for the Education of the Girl Child has in fact only seen a decrease in allocation.

The cutbacks in the first post-poll budget show the real character of the new government. It is significant that the government has slashed the rates of corporate taxes, but has not provided any relief to rural women or even middle class urban women. The projected increase in petrol and diesel prices is likely to further increase the misery of and burden on women.