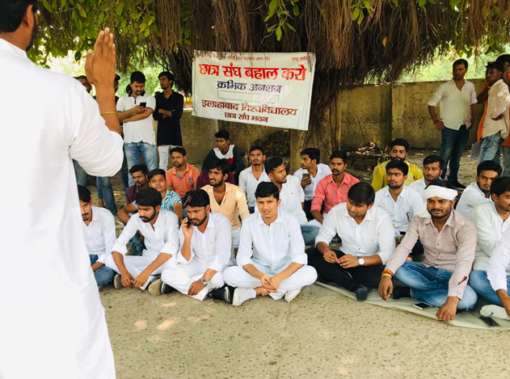 On Thursday, June 27, the students of Allahabad University (AU) started an indefinite relay hunger strike, in protest against the university administration. The students have been protesting for three days, following the decision of the Academic Council (AC) to replace the students’ union with student council. On Monday, June 24, the AC had taken this decision, which will be implemented after the Executive Council’s meeting, that has been scheduled for June 29.

In the month of May, AU had filed an affidavit with the Allahabad High Court, informing that the university intended to withdraw the student union and replace it with student council. In this affidavit, the university administration had cited the Lyngdoh Committee recommendations. Clause 6.1.2 of the recommendations, which says, “Where the atmosphere of the university campus is adverse to the conduct of peaceful, free and fair elections, the university must initiate a system of student representation based on nominations especially where elections are being held at present,” had been cited in the affidavit.

On Wednesday, June 26, a large number of students assembled at the main campus of AU. The students rallied within the premises carrying an effigy of the VC, chanting slogans against the VC and the AU administration. The students have said that the university administration is trying to silence the student leaders who have repeatedly exposed him and the irregularities committed by him on different fronts. The students arrived at the portico of the VC office and staged their agitation for around an hour, following which, they burnt the effigy of the VC.

Talking to NewsClick, Neha Yadav, a PhD scholar from AU, said, “The faculty of the university are the ones ruining the futures of the students. The VC uses the faculty and the staff to propagate his own right-wing, conservative ideologies, but he says that the students cannot take part in politics because that will hamper the education in the university.” She added, “The power to elect their own students’ union is the biggest power that the students of an educational institution have. They want to take that away by irrelevantly citing the Lyngdoh Committee recommendations.”

Singh said, "Dissolving the students’ union is a violation of our fundamental rights. According to Article 19 (1) (c) of the Indian Constitution, all citizens have the right 'to form associations and unions'. They are taking the right away from us."

She added, "I was the first female president of the AU students’ union. I come from a family with no political background. The students’ union gave me a chance to develop my leadership skills and start a political career. They are taking away the right of women, students from religious minorities, and oppressed sections from non-political backgrounds to participate in mainstream politics, because student politics helps them develop the basic skills before they can delve into a political career."

She also said that since the BJP government came to power in the country in 2014, they have viciously attacked the students and the youth. There have been repeated attacks on public-funded higher educational institutes. Singh said, “The country has witnessed massive student movements in the last five years. Not only that, the students have been at the forefront of almost all major movements. We are the ones that raise important issues, and question the authorities. It is no wonder that they want to silence us.”