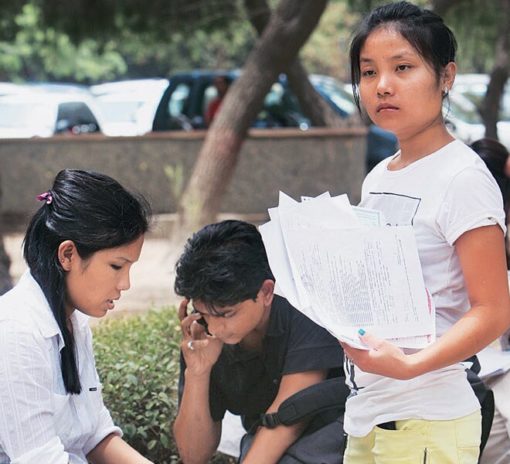 On 31st May, Ministry of Human Resource Development released the draft National Education Policy (NEP) of 2019. As a part of the three-language formula, it had mandated compulsory learning of Hindi in non-Hindi speaking states.The drafting committee on NEP was set up in 2017 under the chairmanship of K Kasturirangan (former ISRO Chairman). Soon it created uproar alleging the government of homogenising the diverse linguistic culture. Following severe backlash, the government dropped the contentious proposal.

Reacting to it, Nand Kumar Sai, Chairman of the National Commission for Scheduled Tribes demanded that Sanskrit be made the official language, since many Indian languages originate from it.While resistance to Hindi especially from Tamil Nadu and West Bengal made headlines, a closer look at the Northeast India shows a mixed reaction to the reception of Hindi.

With more than 90 different languages, Arunachal Pradesh is one of the most linguistically diverse states in India. Each tribe has a distinct dialect, different from the other tribe. Overtime, the different tribes have learnt to communicate with each other with ease with the use of Hindi as their lingua franca. Hindi has become a part of their life but with a twist: the Hindi spoken here is Arunachali creole Hindi. It has evolved to include many tribal words and phrases. “I speak in Hindi with people from other tribes. It makes communication much easier” says Toko Asha, a resident of Arunachal Pradesh, about the popularity of Hindi. Hindi is a compulsory subject till  senior school. Other than speaking Hindi, students here can also write basic Hindi. Many here see Hindi as a uniting factor.

In Assam, the controversy against Hindi has been used by the insurgent group United Liberation Front of Assam (ULFA) to promote sons of the soil movement. The Hindi speaking community has been viewed as representatives of “colonial New Delhi” by the ULFA. People settled in Assam from Bihar, Rajasthan and Uttar Pradesh are grouped as Hindi speakers here. Major attacks on outsiders by ULFA followed in 2003 and 2007 to send a secessionist message. In 2017, the situation flared up again when the anti-talk faction of ULFA asked the Assam government to evict the Hindi speaking group in the Dibrugarh and Tinsukia districts of Upper Assam and rehabilitate those indigenous people who were the victims of floods. The floods had washed away their land and home. However not all Assamese people subscribe to the ULFA-I’s agenda as seen by the general public’s condemnation of such attacks.

The anti-Hindi sentiment in Manipur is more complex. It has taken a toll on theatres but on the other hand, Bollywood continues to be a popular entertainment among the people of Manipuri. The theatres in Imphal only screen English and Manipuri movies after a ban imposed by the People’s Liberation Army (a separatist armed revolutionary group) on screening Hindi movies at the theatres in Manipur. The ban was imposed after a cadre was allegedly killed by the government in a fake encounter. The Chief Minister of Manipur said the ban on Hindi movies did not impact the public. “After the ban, no Hindi movies were screened, but here in Manipur we still watch Hindi TV serials and Bollywood movies on the internet,” said a person who did not want to be named.

Among the three examples as to how Hindi has been perceived, the case of Arunachal Pradesh seems  the most positive. However, though in the other two states the opposition to Hindi as an imposed linguistic culture has come from armed political groups, it would appear that there seems to be little opposition among the lay populace towards viewing popular television programs in Hindi.