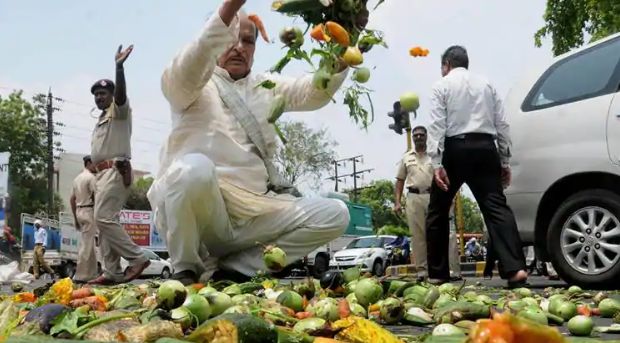 This is the village which created history in India. The farmers of Puntamaba united in March-April 2017 and gave a call for a 'Sheti Band' (farming strike) agitation. This was new to Maharashtra as well as India – of farmers thinking of going on strike. It was unbearable agricultural distress that had brought farmers of this Ahmednagar village on the border of North Maharashtra — Marathwada region — to this stage. They got a huge response from all over the state. One after other, gram sabhas started passing resolutions in favour of the strike. This shook Maharashtra first and the nation later. Newsclick decided to visit Puntamba after two years to see how villagers are looking back at agitation and what their present-day life is like.

"Those were days when doctors were on strike. Anganwadi helpers also went on strike. Then gram panchayat workers. Basically, the government was listening then and negotiating with them. That gave us the idea of a farmers’ strike. We though if we went on strike, the government will have to accept our demands. That was the idea," said Dhananjay Dhorade and Puntamba's Sarpanch Dr Dhananjay Dhanavate. This was the duo that first talked about the strike proposal.

Interestingly, both these men are unaware about the strikes by farmers in the past. Actually, Dr Babasaheb Ambedkar had given a call of a farming strike way back in 1935 and Mahatma Jyotiba Phule also led farmer’s strike in the 1880s.

"We were unaware of this history. Actually, we hadn't seen a farmers’ strike in our lifetime. So, when we spoke to our friends and farmers, they too were surprised," said Dhanavate. The initial idea was not to sow seeds in farms for the upcoming Kharif season. In 2017 also, farmers decided not to sell their vegetables out of district and milk out of the village or tehsil.

In some days, we realised that this won't be successful if it is restricted to just one village. We decided to reach out to neighbouring villages," said Dhorade. He himself is from a neighbouring village, Dongaon. But his village is not just in another district, Aurangabad, but also comes under another region — Marathwada. Puntamba is on the right bank of Godavari river whereas Dongaon is on its left bank. When both the villages were ready for the strike, this duo chalked out an agitation plan and informed the media.

"We appealed farmers of Maharashtra to unite and go on strike from June 1, 2017. That appeal went to every corner of state and we suddenly got huge support. Almost 400 villages immediately passed resolutions to support and participate in the strike. It was heartening to see farmers uniting," said Dhanavate. The 12-day strike from June 1 to June 12 shook the Maharashtra government. Till then, Chief Minister Devendra Fadnavis was adamant about not declaring a loan waiver immediately. But this strike put pressure on him and he gave in to the demands. A waiver scheme of Rs 34,022 crore was announced to farmers. But, …

Two years down the line, nothing has changed in farmers’ lives. Puntamba farmers are still waiting for the justice they fought for.

"Our two major demands were total loan waiver and minimum support price for every crop. Till today, almost 50% of farmers are waiting for loan waiver in our village. We feel empty. Nothing has changed in two years," said Dhanavate.

Puntamba is village with a population of 17,000. It is the biggest revenue village of Rahata tehsil in Ahmednagar district. Just 15 km away from the famous Shirdi city, it is also a railway junction on Daund Manamad railway line. The population of the village consists of people from 14 castes of Hindus, Muslims, Christians and Boudha. The agriculture land in the village is almost 4,500 hectare i.e. 11,119.5 acres. The main crop grown is onion. Sugarcane, wheat, cotton, gram dal, soyabean are other crops that are grown. Production of milk is also a main side business for farmers.

Sangita Bhorkade, who was among those who led the women farmers protest during the strike in June 2017, said she had hoped the state government would help her community. "Nothing has changed in last two years except the loan waiver scheme. We are fortunate enough to get our loan waived off. It was Rs 1 lakh. But there are families in villages whose loan is still there and there is no word from the state government about waiver," she said. She grows gram dal and soyabean. "This is a drought year. Now we are buying water to drink. There is neither Kharif nor Rabi crop this year. I am married for the last 20 years. But this is happening for the first time where both seasons have gone totally waste," she said.

We met Prasad Bodkhe of Puntamba to know the reality of soyabean, which is one of the major crops in Maharashtra. But failing in getting minimum support price (MSP) is the biggest worry for farmers. "This year, the MSP was Rs 3,400 per quintal. But the government failed to protect farmers. Our soyabean has a quota in government procurement centres. But there is no guarantee of the government buying all soyabean. So, farmers have no option and sell it to private traders who give us just Rs 2,900-3,000 per quintal," said Prasad. MSP was one of the most important demands of farmers. The central government in its 2018 budget announced MSP plus its 50% rates to farmers. But this has not been implemented on ground,” he added.

Dilip Doke of Dongaon had grown onion crop this year. As we all know, onion rates have fallen to the lowest in this season.  Doke said he had around 150 quintal of onions this time, but he sold it at the start of season when rates were very low around Rs 700 per quintal. "I wanted money for the marriage of my niece, so I had no choice than sell it the lowest prices. Farmers’ interests need to be protected by government," he added.

"This is happening with every crop. Farmers do the hard work but traders cheat them. They make more money without even their feet touching the soil. This system needs to be changed," said Dhorade.

During the 2017 agitation, the country had seen farmers throw milk on the roads. There was criticism that they were wasting their products. That time the rate was Rs 25 per litre. Farmers were demanding higher rates. What happened after two years?

We met Kiran Rokade and Prashant Rokade, milk producing farmers. Their daily production goes up to 125-135 litres. "Today per litre rate is around Rs 21-22. This has fell to Rs 18 in the last two months. The state government has asked dairy people to give Rs 25 as mandatory rate to farmers. But there is no implementation. We had to agitate again to get our original milk rate back. For a  subsidy of Rs 5 per litre, we are getting Rs 22/23 nowadays," shared Rokade. When asked about what they think they achieved from agitation if this is the condition, he kept quiet. "The worst affected business after the strike is the milk business. We feel that the earlier situation was better," he rued.

But Puntamba Sarpanch pointedly said: "It is true that state government did not fulfilled its assurances. Loan waiver is also limited to a few farmers. The majority is still deprived. But our agitation has sent one important message to the political system. Now they can't ignore the farmers like before. Farmers are united and have realised their power. That confidence amongst farmers is more important," said Dhanavate.

It is ironical that 70 years after Independence, farmers had to take the route of 'strike' to draw the government's attention towards their issues. On one hand, this shows apathy from the government's side, while on the other, it reflects the sorry plight of farmers. The epicentre of that anger is still not calm. Even after two years after that historic strike.