old post
Tribals in Aarey Colony Protest Over Relocation and Unavailability of Basic Needs
May 30, 2019 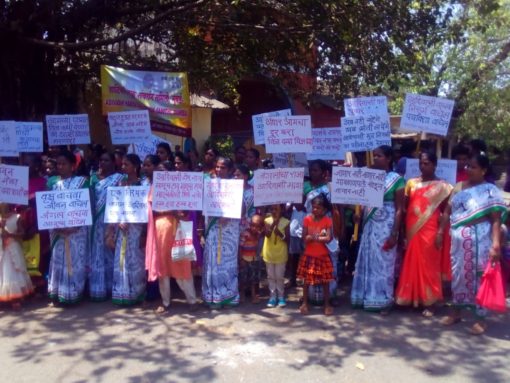 “We don't have basic facilities like water and electricity even though we have been living here for decades now,” said Ravindra, a resident of the Aarey Milk Colony in Mumbai. Hundreds of tribals from Aarey Milk Colony gathered at noon on Tuesday, May 28, to protest against the rehabilitation plan proposed by the state government. Aarey is the last green lung of Mumbai, consisting of 27 hamlets, and is being opened up for developers under the garb of various projects, including the metro car shed and biological zoo. Meanwhile, the people are being shifted to 480 square feet houses in other areas. People from all the hamlets participated in the protest carrying banners representing each pada (settlement). Speaking to Newsclick, one of the residents said, “Our group went to each pada and asked the people about the same. It was a successful protest and we got massive support. We don’t want to leave our homes and we want basic facilities.”

“Development ke naam pe hum ko khatam kar rahi hai ye sarkaar (The government is trying to finish us in the name of development,” said Ravindra, a 33-year-old activist, fighting to save his home from being taken away for corporate projects in the Aarey Colony, Mumbai. Many others like him believe that they are being made pawns in the process of furthering corporate projects by the Devendra Fadnavis government in the state. Previously, speaking to Newsclick, Amrita Bhattacharjee, activist with the Aarey forest movement, had explained, “Multiple projects have come up in the Aarey region. These projects include the Mumbai Metro Rail Corporation project, the car shed project, and another project sanctioned by the Force One Group. The plans, if successful, are likely to affect over 2,000 families.”

The BJP-led government is set to open buffer zones around national parks, tribal lands and private forest lands for construction activities in what comes across as a move directed to benefit a cluster of industrialists. Activists on the ground have stated that the allocation of the green cover is primarily to further the interests of corporates by the state government, facilitating the violation of the Forest Rights Act (2006) as well as the Constitution. In April, a human chain was also formed in Mumbai against the rampant depletion of green cover. In September last year, Aarey locals had led a massive campaign to stop deforestation in the region, bringing the issue to the spotlight. In September, as a major setback to the movement, the National Green Tribunal’s (NGT) principal bench in New Delhi had directed the withdrawal of the case challenging the construction of the metro car shed over 13-acre land.