old post
‘Judiciary has not exactly covered itself in glory when it comes to complaints by women’ : Sr Adv Rebecca M. John
May 13, 2019 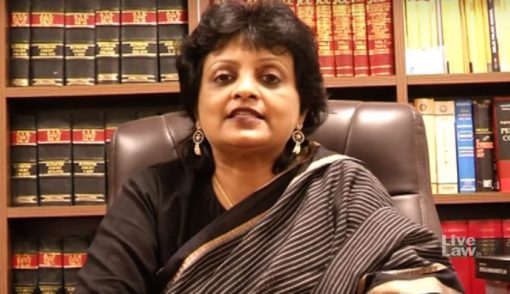 The judiciary has not exactly covered itself in glory when it comes to (sexual harassment) complaints by women. And particularly when they are accusing men in high positions. Most of the women complainants have had no redressal from the legal system", said Rebecca M. John, Senior Advocate, in an interview with Live Law. The senior lawyer expressed astonishment at the reports that some judges had voiced apprehensions about engaging women staff in the wake of sexual harassment allegations against the Chief Justice of India. She stressed the need for more gender balance and level playing field for women in the system.

Based on her experiences as an external member of the Internal Complaints Committee set up by the Delhi High Court, she elaborated on the need to review the Prevention of Sexual Harassment at Workplace Act to include relationships which fall outside the traditional employer-employee framework. Excerpts from the interview:

Do you think that the judicial system and legal profession have normalised and internalised sexism and misogyny?

That's very true. It is very clear. Sometimes you see an onslaught of it, sometimes you think it gets better. But the fact is that there is sexism in the judicial system. It has always existed, in many ways; and it is worse now.

You are saying that sexism in judicial system has become worse now. How is it so?

Well in the earlier days there were not so many women who were practicing. It was a male domain. Today, when woman are pushing the limits inside the legal system and court rooms, I think sexism is one backlash they face.

After the sexual harassment allegations against the CJI, there were reports that judges have expressed apprehensions about employing women staff and engaging women law clerks. What is your response to this?

I am a little amazed that something like this could be said. I don't know whether this has actually been said or if it is only a report without any basis. But if it is indeed an apprehension that has been expressed, I can only remind the judges that under the Indian Constitution, women are entitled to equality. Women are entitled to equal, fair, level playing field when it comes to their workplace. Pushing women out of the workplace is not the answer. The answer is addressing the root cause of the problem and the root cause of the problem appears to be the great sexual imbalance in the system. By pushing them out you are only perpetrating that sexual imbalance.

I have in fact heard of many law chambers, including some very reputed law chambers, where women are not welcome as juniors or associates… and I am increasingly hearing that now. That again is a sad thing. Because as lawyers we too are bound to uphold the Constitution and if our own law chambers do exclude women, then it is unfortunate.

You are a member of Internal Complaints Committee of the Delhi High Court formed under the POSH Act. Can you share some experiences as a part of ICC?

What I can say is, we have tried to create an environment which is sensitive and we have succeeded in helping women who have come forward as complainants; at least to allow them to feel comfortable. We have dealt with some very sensitive cases in the past. From my experiences regarding the working of the Act, I think that there are many aspects of it which require reconsideration.

What is the writ of the ICC, when it comes to relationships which is outside employer-employee relationships?

We are already noticing some flaws in the regulations drafted by the Supreme Court, where members of staff may not fall within the definition of "aggrieved woman" because they come within service rules. I think it may have been better if the Act had addressed the issue from the point of view of workplace. If you narrow it to the point of employer-employee relationship, we will get into legal hurdles.

We had Vishaka judgment which gave us a structure. But it needed to be refined further. We hoped that the Act could have addressed these problems. In fact, there are huge gaps. For example, in the legal system, we have a different sort of relationship. Can ICC recommend action against an erring lawyer? What is the interplay between courts and ICC and Bar Councils?

These are grey areas. I am not the sure of the efficacy of the ICC and I say that as a member of an ICC myself.

In the episode of sexual harassment allegations raised against the CJI, there was collective criticism from many media and members of the bar against the process adopted by the Court. But these criticisms were not well appreciated by some. Union Finance Minister Arun Jaitley said that "institutional disrupters" "destabilisers" etc were behind the criticisms. Few senior members of the bar too voiced similar opinions, describing the allegations and criticism against SC procedure as an attempt to tarnish the judiciary. Do you share those views?

I do not agree with these views. I can also add that a large section of the bar does not share these views. I had occasion to interact with a lot of lawyers on this issue and a large majority of them were extremely disturbed with the happenings and are certainly not in agreement with the blog of the Finance Minister or with the attempts made to bulldoze the proceedings. Most of them, especially the young members, were very vocal about the need to do the right thing.

A large number of members were of the opinion that the complainant must be given a chance to prove her case. And if the complaint is proven to be false, then take appropriate action. There is absolutely no reason why we should be questioned because we question the system. We question the system to strengthen the system and not to undermine it in any way. Questioning the system is something very intrinsic to the profession of law. That very often leads to the discovery of truth. Nobody is saying 'be an arsonist' or be disrespectful. We raise questions because we value our institutions. To say that when I am raising a challenge, I become a disrupter is an insult to the institution and to me as a member of the institution.

When US SC Judge Brett Kavanaugh (then nominee) faced sexual misconduct charges, there was an open hearing by the Senate Judiciary Committee, in full public view, which was telecast in media. Though the complaint was ultimately dismissed, there was a transparent process. In contrast, our judiciary seems to be adopting opaque processes such as evidence in sealed cover, bar on media etc. What do you think is the correct approach?

There could be situations where the complaint is found to be dishonest. The process that leads to such conclusion must be fair and transparent. If it is not, the institutions will be subjecting themselves to criticism, though they may have reached a just conclusion.

When the "Me Too" movement happened, there was criticism that the women should have filed complaints through proper legal process instead of making allegations in social media. Do you think there is anything in our judicial system which makes a woman feel apprehensive about approaching it?

I think it is pretty clear that the backlash against women who make sexual harassment complaints is severe. This possibly deters many women from coming forward. In an ideal world, no one should be condemned without hearing and everyone has the right to guard their reputation. But obviously women are not getting the sort of relief from courts or even from the investigating system that they should be getting. They are not prepared to face the kind of hostility which the system is offering. So, women would think twice before deciding to go through judicial process.

The judiciary has not exactly covered itself in glory when it comes to (sexual harassment)complaints by women. And particularly when they are accusing men in high positions. Most of the women complainants have had no redressal from the legal system. The ICC, which has been brought up as an alternative system, has not been effective. If the alternate structures are also being dismantled, then women are left with no structure to complain to. So, they may be compelled to use the social media to tell their story.

What should change according to you? Will more women in judiciary help resolve the issue?

Certainly. There should be more gender balance. The answer is not taking women out of system; not saying that we will not take women as interns or associates or staff. The answer is to ensure diversity. When I say diversity I mean not just women; include members of other social classes, people with different religious linguistic backgrounds, sexual minorities etc. It makes the system richer. Because if you keep hearing a single narrative, it makes you live in your own silos and you really are not achieving anything. And I think in that sense the legal system has not really diversified.

We still have people of a particular class and privilege occupying the highest place of judiciary. We still have less and less women reaching the top. And I ask myself why? It is not because the women who have been in the system are incompetent. Some of them are extremely competent and obviously there has not been a level playing field.