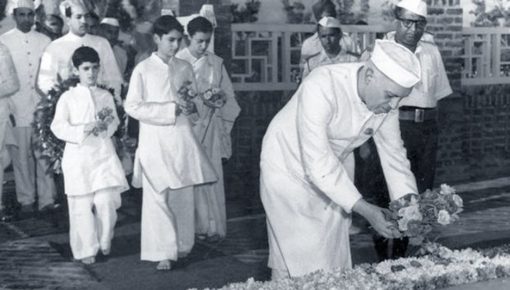 Prime Minister Narendra Modi is like a man possessed. By the ghosts of the Nehru-Gandhi clan as he just cannot seem to rid himself of a certain obsessive fascination with Jawaharlal Nehru and his progeny, expressed usually in vitriol that makes decency squirm.

Modi does not have any advisors of consequence– in that he cannot be overruled– and follows the beat of his own drum that keeps taking him back, over and over again ad nauseum, to Nehru, Indira Gandhi, and now Rajiv Gandhi. The effort is of course to discredit the current Congress president Rahul Gandhi who clearly has transcended the pin prick level and drawn blood in this election campaign.

Nehru-Gandhi bashing has been the one theme of Modi’s five years in power, constant and increasingly vicious. Vikas, Swacch Bharat, Beti Bachao have all disappeared for PM Modi in this Lok Sabha campaign as he is taken over by the Nehru-Gandhi ghosts, moving away from Nehru to target his grandson and India’s late Prime Minister assassinated by the LTTE, Rajiv Gandhi.

His first comment drew a strong reaction, although Rahul Gandhi sent back hugs and love, and the PM followed it with a second have imprisoned the Prime Minister who is unable to get away from the ghosts haunting him. In almost every other speech he targets the Congress First Family, in taunting and highly derisive language that has even his BJP colleagues looking down in embarrassment.

As recently after the PM tore into late Prime Minister Rajiv Gandhi who had been assassinated by LTTE terrorists —at two successive meetings— at the prime of his life it was left to a Karnataka BJP leader to quietly rebujim. Said Srinivasa Prasad, a former MP, "LTTE planned and assassinated Rajiv Gandhi. He did not die due to corruption allegations. Nobody believes that, even I don't believe it. I have lot of respect for Modi ji, but it was not necessary for him to speak against Rajiv Gandhi.” This was just after the Prime Minister of India had declared, “"Your father was termed 'Mr Clean' by his courtiers, but his life ended as ''Bhrashtachari No 1'' (corrupt number 1).”

This statement drew flak from all quarters but clearly Modi had no second thoughts. And at his first rally in Delhi yesterday stepped up the attack on Rajiv Gandhi with, "Even Navy personnel were put on service of Rajiv Gandhi and his family while they were vacationing at the island. INS Virat was also stationed at the island for 10 days during that time.” And went on about how his in-laws were also on the Naval ship, in taunting tones that dramatically reduced the size of the Prime Ministerial chest from feet to inches.

The comments against the Nehru-Gandhi family have laced almost every other speech by the PM, in Parliament and outside. Many of these are directed as the above at Rahul Gandhi. And again earlier, "if there was no Sardar Patel, the temple in Somnath would not have been possible. Some people are remembering Somnath today and I have to ask them – have you forgotten history? Your parnana (great grandfather), our first Prime Minister, was not happy with the idea of a temple being built there." This was part of his attack on Rahul Gandhi for visiting the Somnath temple.

And yet again, "I remember Indira Gandhi had come here and Chitralekha (a magazine) had printed her photo with a handkerchief over her nose, trying to avoid the stench, while another photo on the same front page had RSS workers carrying bodies.". This was in reference to the Macchu dam tragedy in 1979.

An unending stream that Rahul Gandhi has largely ignored. Or responded to by urging the PM to take up issues of development. Or as more recently with love. But the question that rises is why does Modi feel this almost unmanageable need to attack the Nehru-Gandhi family, with the tones sinking the low level rhetoric to further depths.

Initially one had presumed that the attack was to weaken the Congress by highlighting the Dynasty factor. But for any political leader the signal that this was not working came from the Congress victory in the Assembly elections in Rajasthan, Madhya Pradesh and Chhatisgarh where it wrested government from the BJP.

So clearly this was not it. So one thought that it was then part of the anti-Rahul Gandhi campaign by exposing him as little more than the inheritor of a legacy. This was punctured quietly by the Congress president himself when he would respond quietly to questions saying that yes he knew he was privileged, he realised that he was part of a family, but that the family itself had paid for its years in power with the assassinations of his grandmother and father. And yet, because of this privilege he wanted to give back to the country. The Modi campaign thus started to fall flat, and soon the resonance it seemed to have generated, died an almost natural —definitely unnoticeable—death.

Then looking for political reasons one presumed that Modi’s attack was generated with his and the RSS desire to re-write history by writing off the past, and the contribution of the Nehru-Gandhi Prime Ministers therein. The initial focus on Jawaharlal Nehru seemed to lend this credence, but now at the end of five years and in the midst of the Lok Sabha campaign, this too appears to be a fallacy. As clearly the past has not been erased, and the Indian voters do not seem to care whether Nehru wore a red rose or not, or whether Indira Gandhi had indeed covered her nose during the floods.

This time around the over-extended attack on the Congress First Family is actually evoking sympathy for the family and Rahul Gandhi. Instead of the silence, or the sniggering, Modi’s attack is arousing irritation and anger judging from the responses of not just the opposition leaders but also those sections on the social media who cannot be described as pro-Congress. No more, enough is the response as even the BJP and the trolls appear a bit weary of Modi’s fixation.

But even so Modi went ahead with the attack, not once but twice in rapid succession, on Rajiv Gandhi? Why? Well since he has stopped making political sense with his attack on the Nehru-Gandhi family drawing an adverse reaction now, one can only credit the ghosts with his obdurate obsession!