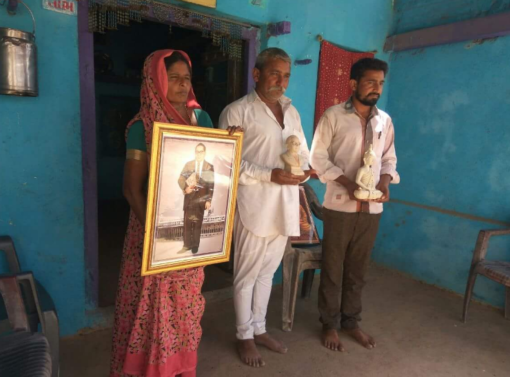 Balubhai Sarvaiya and his family, who were victims of caste violence of the Una flogging case in 2016 and dalits from five other villages of Una, Gir Gadhara and Kodinar talukas of Gir Somnath and Junagadh districts have been staging hunger strike in front of the office of the sub-divisional magistrate in Una. While other dalit families have been demanding allotment of agricultural land, Sarvaiya has been demanding government jobs for his sons and relatives who were assaulted by cow vigilantes, and were forced to quit their traditional occupation of skinning carcasses.

However, as the hunger strike entered its 55th day, Kunvarben Sarvaiya, wife of Balubhai Sarvaiya who was protesting with her family in extreme heat, reportedly fainted and was rushed to a hospital in Una.

“She is better and wants to join us back for the protest,” said Vasram Sarvaiya, son of Kunwarben and one of the four youths to be flogged.

This is the second incident of a protester falling sick since March 11, the day the family sat on hunger strike. On March 17, 65-year-old Nathubhai Sarvaiya, cousin of Balu Sarvaiya had falln sick.

Notably, in November last year, Vasram Sarvaiya had written a letter addressed to President Ramnath Kovind seeking euthanasia for the family if their demands are not met.

“Our family has quit skinning carcasses, a work that had fed our family for generations post the attack. We have no alternate means of livelihood,” Vasram had written in the letter.

The Sarvaiya family claims that following the incident, then CM Anandiben Patel had assured that apart from compensation, five acres of land be allotted to each victim and government job in accordance with their qualification.

More than two years have passed since four Dalit youths were flogged in Una, a town in Gir Somnath district of Gujarat. Post the incident, video recording of the incident was circulated by the perpetrators themselves on social media which brought Mota Samadhiyala, a nondescript village near Una, the home of all the victims under spotlight.

A group of cow vigilantes had allegedly barged into the house of Balu Sarvaiya whose primary occupation then was skinning the dead cattle. The cow vigilantes had reportedly assaulted seven members of the Sarvaiya family including Balu, his wife Kunwar, his sons Vasram and Ramesh and relatives Ahsok and Bechar. Devarshi Banu, who had come to the family’s rescue, was also reportedly thrashed. Later, the mob had allegedly tied Ramesh, Vasram, Ashok and Bechar to a car, stripped, flogged and marched them half naked for about 25 kilometres to Una.

The incident that happened on July 11, 2016 changed the course of life for the Sarvaiya family as injuries refuse to get healed and memories of the day haunt them. Vasram has a perforated ear drum and leg injuries, and he has been suffering chronic pain. Bechar was brutally injured, and now cannot stand on his own or for long. He has also developed speech problems, and is not completely mentally stable.

Ashok, nephew of Balu Sarvaiya, the youngest victim was a minor when the incident happened. Ashok has sustained the worst injuries of all, and is still mentally traumatised. He has been left with a rupture in his stomach and suffers from chronic diarrhoea and constant stomachache, and been mostly bed ridden.