old post
Has BJP Taken a Risk in Fielding Terror-Accused Pragya Singh from Bhopal?
May 2, 2019 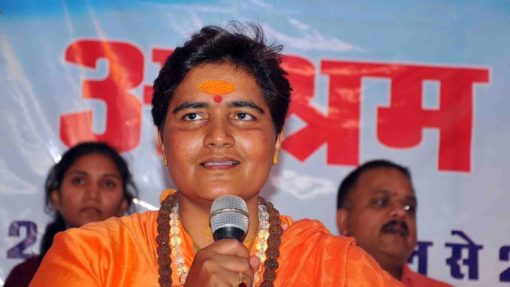 Even some BJP leaders are unable to comprehend why their party picked up Malegaon blasts accused Pragya Singh Thakur to contest from Bhopal Lok Sabha seat against former Congress Chief Minister Digvijaya Singh. She is on bail on health ground. Her criminal background apart, Pragya Singh is not a politician, she does not know what are the issues in the election, she does not understand the nitty-gritty of electioneering, she does not have a rapport with party workers and she does not know the people of Bhopal who have seen her only occasionally when she appeared in a court as the accused. Digvijaya Singh, on the other hand, is a consummate politician having contested and won both Assembly and Lok Sabha elections and organised many an election from village panchayat level to Parliament.

Pragya’s campaign had a bumpy start. She joined BJP in Bhopal in the morning of April 17 and in the afternoon she was declared as the party’s candidate for Bhopal constituency. Even before her name was formally announced, she made some obnoxious remarks about Hemant Karkare and said that she had put a curse on Karkare seeking his total destruction and five weeks later he was killed. Chief of Maharashtra’s Anti-Terrorist Squad (ATS), Karkare was part of the police team that was fighting the terrorists who had attacked Mumbai on November 26, 2008 and was killed by a terrorist’s bullet, along with some other police officers. Even Narendra Modi (he was not the PM then and was not totally bereft of common sense) had praised Karkare for his supreme sacrifice for the country and offered the slain police officer’s wife, Kavita, Rs one crore which she had politely refused.

Pragya’s skanky remarks about Karkare had aroused country-wide anger and anguish as much as in Madhya Pradesh the BJP had to publicly dissociate itself from Pragya’s observations and even Pragya had to reluctantly withdraw her remarks. But the damage was already done for BJP’s electoral prospects, many feel, not only in Bhopal but beyond Bhopal and Madhya Pradesh.

In Bhopal, it appears, the party as a whole does not have its heart in campaigning for the terror accused. It is reflected in their style of campaigning. Union minister and former Chief Minister Uma Bharti, to give an example, told media persons on arrival in Bhopal that Pragya was a Mahamandaleshwar (great saint) while she (Uma) was merely a stupid person (moorkha). Shivraj Singh Chouhan who had, as Chief Minister, once arrested Pragya Singh Thakur for the murder of a fellow RSS activist Sunil josh, went to Chhindwara where the Collector did not permit his helicopter to land. Chouhan shouted invectives at the Collector and threatened to see him once the Congress government was gone. The Collector was merely following the rules framed by Chouhan’s own government in 2010. The IAS Association condemned Chouhan’s outburst against the Collector while the Election Commission dismissed Chouhan’s complaint against the Collector. One can safely assume that Chouhan was not unaware of helicopter landing rules which were framed in his own time as Chief Minister. Still he resorted to threatening the Collector who was merely following the rules and annoyed the higher bureaucracy. Difficult to believe that it was an error of judgement or an innocent act. Chouhan knows, as everyone else knows, that greater impact of the annoyance of bureaucracy will be felt in the capital city of Bhopal. The IPS officers are already unhappy at Pragya Singh Thakur’s scurrilous comments on Hemant Karkare.

Not trusting the local BJP leaders, Pragya Singh has called her sister, Upma Didi, from Bilaspur (Chhattisgarh) to take charge of her election campaign. The sister is a novice in politics and electioneering as Pragya herself. Nor does she appear to be acquainted with the Bhopal Lok Sabha constituency. With her pretensions as a Sadhvi, Pragya Singh spend around three hours in the morning in her Dhyan and puja. Then she starts on her campaign, accompanied by her sister and some State BJP leaders, frequently stopping at temples on the way and peremptorily talking to the people who gather there either for her Darshan or because of their party loyalty. The only issues involved in the election for her are dharma and adharma. She hardly talks about any other issues.

As she can’t stand journalists (at least those who are not believers in dharma), she has left it to a State BJP spokesman to deal with them. An outside reporter had come to Bhopal and, advised by someone, she went to the spokesman to fix her interview with Pragya Singh. The spokesman asked her to give her questions in writing. On the reporter’s asking as to how Pragya would be replying to those questions, the spokesman said that he would himself write the replies. Needless to say, the reporter left giving a fitting reply to the spokesman.