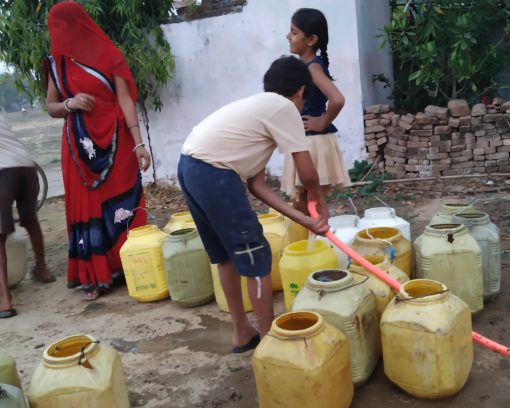 Harduwa – a village in Sirmour Tehsil in Rewa district was adopted by the BJP MP from the Rewa constituency, Janardan Mishra, four years ago under the Saansad Adarsh Gram Yojna (SAGY) – a rural development scheme. But, the ‘development’ is nowhere to be seen in the village.

A village of more than 4,000 residents is lacking basic facilities including water, primary health centre and electricity. Its government school buildings are wrecked, roads are bumpy and most importantly, untouchability is practised.

Sansad Adarsh Gram Yojana (SAGY) is a village development project launched by the Government of India in October 2014, under which each Member of Parliament will take responsibility to develop physical and institutional infrastructure in three villages by 2019. Janardan adopted only one village, which, too, is in a pitiable condition.

The village is 35 km West of Rewa city, and is located along the Rewa-Sirmour road in Rewa district.

The villagers claimed that Mishra hardly made any effort to convert this hamlet into a model village. “In the last couple of years, neither any roads have been constructed, nor the water crisis has been resolved,” said a 40-year-old advocate and resident of the village, Purnendu Tripathi.

Villagers claimed that the entire village has been relying on a submersible motor boring pump and a hand pump because rest of the 47 hand pumps have gone dry long ago, and no efforts have been made to reconstruct it. Villagers keep queuing up round the clock to get a bucket of water.

“Water has made our life hell. This is an everyday struggle. If the pump goes dry, we are forced to travel 3-4 km to get water,” said 25-year-old Nagedra Singh, who is pursuing a master’s degree from Rewa.

“The water tank has been constructed in the village years ago, but it’s only for showing off,” he added.

The hand pump lies close to Dalit and Scheduled Tribes’ colonies, while submersible water pump lies in the upper caste colony. Neither upper caste men go to the Dalits’ colonies for water nor Dalits and Tribals are allowed to fetch water from the boring pump. If the water bodies go dry, residents from both the colonies are forced to travel a distance of 3-4 km to fetch water.

The nearest primary health centre is 3-4 km away from the village in Sirmaur. “Forget about the health centre, no medical store lies in the vicinity of the village. We are forced to go to the nearest market for the treatment. No efforts have been made to establish any health care in the village,” said a resident, Nagendra Dwivedi.

Half of this village sleeps in the dark. The villages are still relying on kerosene lanterns, as one of the electric transformers – that supplies electricity to the Dalits’ and Tribals’ colonies – had burst six months ago. Since then, half of the population has been living in the dark.

“Examinations are just around the corner, but there is no electricity,” said 42-year-old Uttam Bansal.

Another resident, Vijay Lal Bansal, said, “Despite our several attempts at changing the transformer, the officials at the electricity office pay no heed to us. They ask us to pay the bills first, and then talk about the transformer.”

The village has a primary school building, but without adequate teaching staff, claimed the locals.

“Most of the school buildings are wrecked, and the teachers are forced to take classes in the open. But in the last two years, some buildings have been constructed using substandard quality material. There’s water leakage in the one-year-old building. Owing to it, children can’t attend classes in the rainy season,” said Vikas Singh, a youth from the village.

When asked about the condition of the toilets, Singh replied, “Students, including girls, relieve themselves in the backyard of the school because the old toilet is filthy, and newly constructed one is locked.”

Some of the youths claimed that massive corruption has taken place during construction of the school buildings and water tanks with the help of local leaders and village sarpanch.

Above all, the untouchability is visibly prevalent in the village. One of the Dalits, requesting anonymity, said that they don't dare to use horses for grooms in the marriage because it might irk the upper caste men and clashes could erupt.

One of the residents, Vijay Lal Bansal, told NewsClick, “There was a fight over water a month ago, when a Dalit man tried to fetch water from the pump. Somehow, the matter was sorted out, but the tension between the upper castes and Dalits still exists. Untouchability is still practised in this area.”

Villagers claimed that despite several complaints to the departments including water, electricity and school education departments as well as to MP Mishra, no remedial action has been taken so far.

When contacted, sarpanch of the village Ram Singh refuted the residents’ claim. He said, “The MP has spent Rs 47 lakh in the village. New school building was constructed. They have constructed a pond, water tank, roads and 800 toilets.”

Despite several calls, MP Janardan Mishra could not be contacted to confirm either side of the story.

NewsClick travelled to Karwahi village in adjacent parliamentary constituency, Sidhi, where BJP leader Riti Pathak is the MP. Five years ago, she has adopted three villages under SAGY – Karwahi, Bahri and Daga – but failed to turn any of the villages into an “adarsh (model)” village.

Karwahi is home to more than 4,500 people, and is located 33 km away from the Sidhi town.

The villagers said that the government’s claim of 100% electrification is false, and that many villages do not even have electric polls, let alone electricity. They have to travel 30 km to get primary health treatment. Most importantly, the village has been declared ‘open defecation-free (ODF)’, but villagers still go out in open.

Just like, Harduwa, people of Karwahi have been suffering from the water crisis. “Only one-two water hand pumps are functional in the village; the rest have gone dry. We fetch water from a tube well located 3 km away from the village,” said 28-year-old resident Sushant Tomar.

“The MP has promised to resolve the water crisis and provide water for irrigation, but even after five years, nothing has changed,” Tomar added.

“The primary school has no benches; the students from the lower classes sit on the ground or beneath the trees,” said Ghanshyam Yadav, a resident.

One of the residents, Suadeen Yadav, claimed that payments of Union government’s toilet scheme and Prime Minister Aawas Yogna is due. “Due to the delay in making ration cards, the villagers are not being able to get subsidised food grains. Only 30 people have got the benefit of Prime Minister Aawas Yogna, who are close to the MP in the first list, and second list has not published yet.”

One of the residents, Naseer Khan, said, “Only 170 toilets have been constructed, and the village has been declared ODF. Villagers are not getting subsidised food grains, kerosene, how can it be an aadarsh village?”

When contacted, the BJP MP Riti Pathak said that she has constructed playgrounds, anganwadi bhawan, a pond, etc.

“I have spent around Rs 25 lakh from MPLAD fund, and have done everything which I can do in my capacity. I will try to resolve the issue, if voted to power next time,” said Pathak.