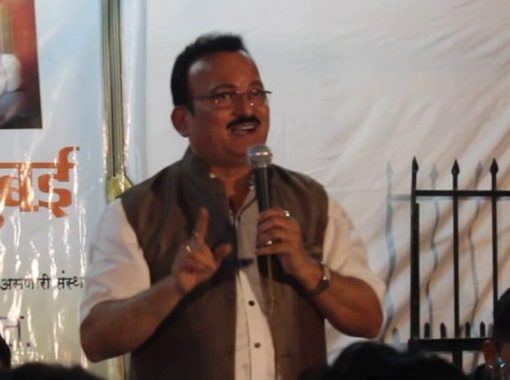 The Indian National Congress party has been receiving flak from several secular and progressive activists from across the country over its decision to give a ticket to Navinchandra Bandivadekar. Reports allege that he had openly supported a former Sanatan Sanstha activist – an alleged Hindu extremist.

Bandivadekar has been declared party’s candidate from Ratnagiri-Sindhudurga Lok Sabha constituency in Maharashtra. The announcement came on Wednesday evening.

However, on Thursday morning, a story claiming Bandivadekar backing Vaibhav Raut (accused in the Nalasopara explosive seizure case) started doing rounds in groups across the state. The URL of the story belonged to the website of Sanatan Sanstha. A number of activists from this Hindu right-wing cult have been time and again accused in murders of rationalists, namely Narendra Dabholkar, Govind Pansare, M M Kalburgi and journalist Gauri Lankesh. The article in question is titled: ‘Janasamvad Sabha to oppose unjust action taken against Hindu activist’, dated September 10, 2018.

The background of this ‘Sabha’ and the news needs to be understood. Maharashtra Anti-Terrorist Squad had arrested Vaibhav Raut at his residence in Nalasopara, in the first week of August 2018. Raut was caught with 20 country-made bombs, bomb-making material, other weapons as well as “objectionable” literature. Raut has allegedly been an activist of Hindu Janjaguti Samiti, an offshoot of Sanatan Sanstha. The later arrests based on Raut’s links have helped the investigative agencies make progress in the Narendra Dabholkar assassination case.

In the said story from the Sanatan Sanstha website, Bandivadekar is seen supporting Raut. He had joined this morcha for Vaibhav Raut in the capacity of chairman of Akhil Bharatiya Bhandari Samaj Mahasangh. Bhandari is a caste mainly located in coastal regions of Maharashtra, and concentrated in Ratnagiri Sindhudurga Lok Sabha constituency.

According to the story, Bandivadekar had said at this meet: “We are surprised that a person striving to protect cows is branded as terrorist. We shall not tolerate injustice against anyone. We shall extend as much support as possible to such person.”

This statement as well as his candidature has been condemned by a number of activists and civil society members across India. Calling out Congress’ doublespeak on the issue of secularism, many have demanded immediate revert from Congress President Rahul Gandhi. However, Maharashtra Pradesh Congress Committee (MPCC) has remained adamant on its stance, and has supported candidature of Bandivadekar.

“Congress candidate from Sindhudurga, Navinchandra Bandivadekar, has no connection whatsoever with Sanatan Sanstha. He has neither participated in the activities of Sanatan nor has any sympathy for the same. Since there was pressure from the community (read Bhandari caste) considering rumours of presumably prejudiced action of the police, as a president of Bhandari community, he had gone to inquire,” said MPCC spokesperson Sachin Sawant in his statement. He added that Bandivadekar does not support the ideology of Sanatan.

Congress’s attempt to sweep the issue under the rug has irked many. Avinash Patil, executive president of Maharashtra Andhashraddha Nirmulan Samiti – an organisation founded by Dr Dabholkar – called this decision ‘unfortunate’. “Congress must clear its stand on the Sanatan issue. This candidature is not coming as a right decision. In such an important battle, it is the job of the Congress to be more sensitive,” said Patil. Meanwhile, ‘Friends of Democracy’, a forum formed by like minded people across Maharashtra has demanded immediate change of candidate. “We always take a stand that to defeat the model of BJP and RSS, all like-minded parties must join hands, and Congress should lead the battle. But this decision hurts the idea of Congress as well as idea of secularism. So, we demand immediate removal of the candidate,” reads statement issued by Friends of Democracy.

Meanwhile, sources from the Congress indicate that the party leadership has taken cognisance of the controversy. “The candidate of Ratnagiri-Sindhudurga will be replaced, the process has started at the top level. In matter of maximum 24 hours, hopefully, change could be announced,” sources told Newsclick.