old post
Rafale is Fast Becoming the Metaphor for Illogic and Incoherence by High Functionaries
March 7, 2019 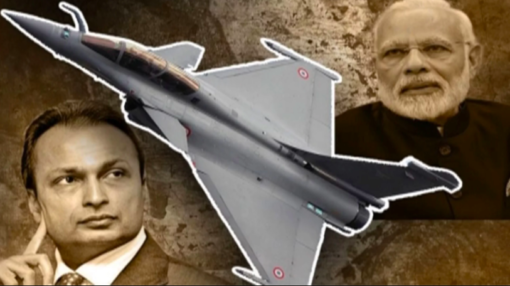 It is a fighter jet manufactured by Dassault Aviation of France, but Rafale is rapidly becoming the metaphor for a plunge into illogic and incoherence by high functionaries.

Appearing at a hearing of the Supreme Court on February 6 and arguing in his capacity as Attorney-General against an inquest into the acquisition process of the Rafale jet by the Indian Air Force (IAF), K.K. Venugopal spoke his mind rather strangely.

All the documents suggesting malfeasance in the deal had been obtained through illegal means, he argued, and the government was not obliged to answer questions arising from them. The Supreme Court would be seriously remiss if it were to order an inquiry on the basis of media reports relying on stolen documents.

While claiming this broad immunity from scrutiny, the Attorney-General seemed also to enter a stricture about the right way to use stolen documents. The Hindu, in a story under the byline of its chairman, N. Ram, had reported the contents of an internal Defence Ministry note, detailing serious objections at the interference by the Prime Minister’s Office (PMO) in the negotiating process.

The note had travelled up the bureaucratic hierarchy from the Deputy Secretary’s level and secured the endorsement of the Defence Secretary, with a recommendation to the Minister of Defence that the PMO could be advised to avoid “such discussions”, which tended to undermine “our negotiating position seriously”.

The story as reported soon afterwards by the news agency ANI and recounted before the Supreme Court by the Attorney-General, was that the Minister, who at the time was Manohar Parrikar, had cautioned against “over-reaction”, since it “appeared” that the PMO and the French President were “monitoring the progress of the issue”.

Effectively, the Attorney-General was telling the Supreme Court that ANI had used the stolen documents prudently, in a manner that exculpated the PMO, while The Hindu had not. Seen in context of the special favours ANI has enjoyed during Prime Minister Narendra Modi’s tenure — including four occasions when it has been granted that rarest media event of an interview — this would be a laughable proposition.

The Defence Ministry note dated November 25, 2015, plainly read, was an elaborate bureaucratic feint by which officials up and down the hierarchy sought to protect themselves from jeopardy in a deal assuming seriously unsavoury dimensions. With the Minister signing off on the note, the onus for addressing every awkward question stood transferred to the PMO.

It is long and well established judicial precedent in India, that evidence obtained through illicit means could be admitted in court, unless it is explicitly proven false. Two cases going back almost five decades testify to this basic common sense: R.M. Malkani versus State of Maharashtra (1972) and Pooran Mal and Others versus Director of Inspections of Income Tax (1973).

Facing the scepticism of the bench as he pursued a fruitless line of argument, the Attorney-General shifted his stance, calling for restraint in a matter that vitally affected India’s national security and foreign relations. Opponents of the government were using the Rafale deal to weaken India, he argued, and the induction of the advanced fighter jet was an urgent necessity at a time of serious threat.

There was great puzzlement all around at this suggestion that national security was a rubric broad enough to allow a flourishing culture of corruption. The Attorney-General’s averment seemed to echo the Prime Minister’s stump speeches as he campaigns across the country, claiming sole guardianship over national security.

At another level, the Attorney-General’s suggestion that media platforms publishing the Rafale papers were liable to prosecution under the Official Secrets Act, met with determined pushback. Aside from the primetime noise merchants who have brazenly targeted media organisations and journalists that maintain a degree of critical distance from the Modi government, the reaction was uniformly scornful.

N. Ram for his part, dismissed any suggestion of impropriety in publishing the documents. Far from being stolen, the documents were obtained from “confidential sources” which would, consistent with best media practice, remain protected. Investigative journalism could not be held liable in any way for uncovering in the public interest, “significant information that was withheld or suppressed despite repeated demands made in Parliament and outside”.

Finally, it was an unintended outcome of the Attorney-General’s submissions, that they testified to the authenticity of the published documents.

Though the protection of sources is a right granted the media in several jurisdictions, India has no specific law or judicial precedent upholding the principle. A 1983 report of the Law Commission had recommended an amendment to the Indian Evidence Act to operationalise the principle, but this remained unimplemented.

Meanwhile, the situation on the ground has drifted to the detriment of press freedom. To name one instance, a special security law introduced in the Maoist insurgency affected state of Chhattisgarh, explicitly withdraws this privilege to the media.

In terms of judicial precedent, the Delhi High Court had in a case of contempt in 1997, refrained from compelling the daily newspaper The Pioneer from naming an anonymous source alleging judicial complicity in real-estate industry corruption. Without upholding the principle, the court merely ruled that the news report was poorly written, lacking in merit and unlikely to influence public perceptions.

In an older case involving the film magazine Stardust’s gossipy account of the personal life of the Bollywood diva Shabana Azmi, the court first compelled disclosure of sources and then reversed its decision. Again, the principle of confidentiality was not upheld. The court only ruled while declining to accord any such “special privilege”, that “the protection of sources would only be extended “where the information or material published is of public importance, e.g., if the information relates to malpractices of a government organisation”.

Even with all the ambiguity, the Rafale case falls squarely within this domain.

The Modi government would be on a fool’s errand if it were to seek a disclosure of sources to save itself further embarrassment. To have misled the Supreme Court in December, claiming vindication in a Comptroller and Auditor-General report that was yet to be submitted, was unwitting but eloquent admission of serious impropriety. The fury against media organisations publishing “stolen documents” adds to that record of self-incrimination.