“We often think of the revolutionary in terms of bombs, guns, public action, mass mobilisations and political spectacles. We have long been familiar with depictions of revolutionary as angry young men. But if a ground of revolutionary action is indeed the realm of the intimate, then this encourages us to grasp the relationship between private and public action in a different way, and to go beyond the masculinist gendering of ‘revolution.’” – Kris Manjapra, “The Impossible Intimacies of M.N. Roy”(2013)

Ania Loomba’s Revolutionary Desires: Women, Communism and Feminism in India (2019) examines the lives and subjectivities of revolutionary and communist women from different classes in India from the late 1920s when it took roots in India, to the 1960s, when it fractured. By “revolutionary women”, she means those who were part of the militant and nationalist underground movements of the 1920s and 1930s, many of whom joined communists or socialist parties later.

When the lives of communist women are studied, often the discussion remains limited to the exaltation of their public achievements or the contributions they made towards strengthening the political debates and struggles at the time. Little is said about their domestic or emotional or everyday lives. Through an examination of a diverse range of writings by and about, revolutionary and communist women, including memoirs, autobiographies, novels, party documents, and interviews, Ania Loomba traces the experience of these women, showing how they waged public and private battles, and making for a compelling intervention in a neglected field of feminist and leftist politics.

By narrating her own experiences — whether as a child growing up in a communist household, or a university student activist member of the same party, or the process of interviewing the same women years later for this book, Loomba presents a moving account of the deep-seated and complex relationship between women’s issues and questions of social justice in general. Below is an extract from the book's Introduction.

This is a part of a series of posts, leading up to the International Women's Day, that the Indian Cultural Forum is dedicating to women asserting change in cultural, economic, and socio-political spaces. 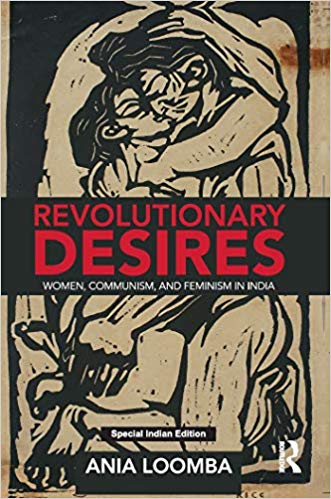 Both my parents were devoted communists in India, although until my father died in 1973, my mother did not have much time for political party work. She was too busy raising my sister and me and earning a living by teaching in a school, which we could, therefore, attend for free. Both my parents came from well-off backgrounds, and their political choices led them to live lives that were quite different from those of those of their own families.

To be raised by communists in India (or indeed in most parts of the world) was to inhabit a bifurcated world, or to learn to speak two languages 1. We could not afford the same material comforts as our classmates or cousins but our parents always saw to it that we had enough books. Material shortcomings were compensated for by the assurance of having a powerful ideal to work towards, nothing short of world transformation. The fact that my mother was the breadwinner, and my father a full-time political activist, also set us apart from every other family we knew. And yet, in many ways, the division of domestic labour was not different, with my mother largely responsible for the everydy running of our lives. My sister and I were conscious of being raised as few others of our friends and peers were, with an enviable freedom denied to most young women in India. But we often remarked that our friends would be able to talk ti tehir mother about boyfriends and sex, heartbreak and hope, in a way that we could not, perhaps because such a focus on the personal was seen as an unwelcome divesion from the struggles that really mattered. In later years, I briyght this up with friends whose mothers were also part of the left mocement. It seemed that their mothers, too, shared that particular quality of being at once supportive of and detached from us, radical in their attiututes to gender and yet curiously puritan. Our mothers – leftists who cane of age in the crucial anti-cplonial natiobalm – set themselves proudly apart form the usual narrative of wifedom and coupledom. Perhaps because of thism they did not always, confront or critique the ways in wich their lives had not broken away from these conventional narratives.”

“Communist self-fashioning did not take place in an ideological or social space of its own. Especially when it came to questions of gender and sexuality, communists were as deeply influenced by nationalist ideas and practices as they were by Marxist or revolutionary ones; indeed, the former provided the lens through which they viewed and appropriated the latter. As we know, male nationalists insisted on the divide between a public sphere in which they could and best colonial officials. And a private sphere of religion, culture and domesticity, that was to remain immune to any colonial intervention. Women activists both contested this division and were trapped within it. Partly because women’s emancipation in India was, as in large parts of the colonized world, intertwined complexly with the struggle for independence, feminist scholarship on India has always been sharply conscious of the historical connections between women’s personal, sexual, and political freedoms and the larger structures of social power. It has traced how, from the nineteenth century onward, Indian women offered critiques of their subordination and, later fought to change their place at home and in the world, while actively participating in movements for social and anti-colonial emancipation.”

“In the early revolutionary movements, resistance largely took the form of militant and spectacular actions, from robberies and shootings to the hurling of bombs – actions that confirm rather than challenge established forms of heroism. In her study of Naxalite women, Mallarika Sinha Roy suggests that

in communist writings, gender ambivalent notions of courage and activism emerge […] female bodies also come to represent qualities of masculine activism. Revolutionary women, who are lauded for their courage and resourcefulness, become de facto ‘men’, and they are also implicitly turned into absolute markers of chaste femininity.

But surely when ‘female bodies also come to represent masculine activism’ the result is not only ‘gender ambivalent notions of courage and activism’, but also, more fundamentally, a confirmation of gender binaries. When strong women are turned into ‘de facto men’, the equation of courage and activism, with action and manliness is emphasized.

Read More:
“But eventually, I did find a permanent place to rest, a home of bricks and mortar…”
“Writing has become a response to the political horrors of the present”
Basanti: Writing the New Woman