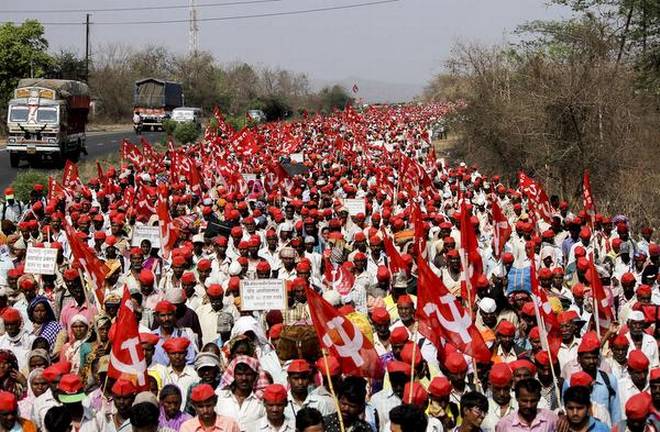 The All India Kisan Sabha (AIKS) – Maharashtra, is leading a second Kisan march from Nashik to Mumbai, to highlight the grievances of farmers against the BJP let state and central government. Over 50,000 farmers from across Maharashtra are expected to join the march to express their anger and dissatisfaction.

AIKS leaders said that the government has not implemented several assurances it gave in March 2018 when 40,000 farmers undertook their first long march from Nashik to Mumbai to highlight agrarian distress.

Speaking to The Citizen, Dr Ashok Dhawale, AIKS President said, “Under the leadership of the Narendra Modi led BJP government, farmers have witnessed an aggressive pursuit of market-oriented projects. There has been complete neglect of their demands. The neglect by the central and state Government has added additional burden on the already debt-burdened peasantry of our society, especially landless farmers.

Dhawale said, “we are organizing the Kisan march to address 3 main concerns:

– Fulfil our demands from the last Kisan march of March 2018; including proper implementation of the Forest Rights Act in tribal areas.

– Provide relief measures to the farmers affected in drought-hit districts of Maharashtra.

– Request the central Government to implement recommendations of the MS Swaminathan Committee.

Dhawale added, “PM Modi, before 2014 elections, promised implementation of recommendations made by MS Swaminathan Committee. Almost 5 years have passed and those recommendations have not been executed. Farmers are not getting Minimum Support Price (MSP) as recommended by MS Swaminathan Committee. Most subsidy and farmer schemes are being corporatized to give benefits to the business class.”

“The cuts in social security measures, as well as the ever-increasing burden of price rise, the increase in health and education expenses — these are just a few of the examples that reflect the crippled policies of the government.”

Dhawale further said that “the agrarian crisis has also intensified leading to increased farm suicides, indebtedness and migration. All promises made by the Prime Minister and the BJP government to the peasantry have been betrayed. The peasantry is being dispossessed and forced to sell their labour in the unorganized sector under precarious conditions.”

“Not only have a large number of farmers missed out on loan waivers; they have had to face heavy losses after the attack of the pink bollworm pest especially in Vidarbha and Marathwada region,” he said.

Both the central and state government have failed to address the crisis of poor farmers, Dhawale said.

He added that “farmers are not getting MSP as per the recommendations made by the Swaminathan committee. Two bills were introduced in Parliament as private members’ bill highlighting the concerns and putting forth proposed relief measures for farmers. They are still pending in Parliament. It clearly shows that the government is not willing to work for the farmers. It is terrible.”