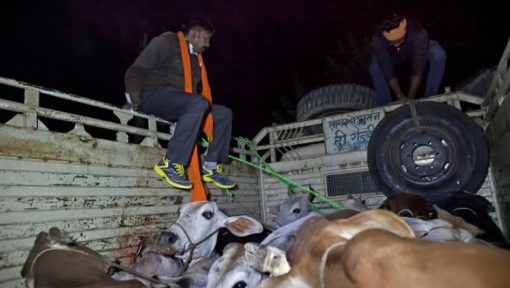 Almost all cow vigilante groups in India that have been instrumental in lynching people on the pretext of cow protection are somehow connected to the Hindutva organisations in India.

-In almost all of the cases, the police initially stalled investigations, ignored procedures, or even played a complicit role in the killings and cover-up of crimes.

-Instead of promptly investigating and arresting suspects, the police filed complaints against victims, their families, and witnesses under laws that ban cow slaughter.

These are some of the key findings of Human Rights Watch, an advocacy group based in the United States.

“Self-appointed ‘cow protectors’ driven by irresponsible populism are killing people and terrorizing minority communities,” said Meenakshi Ganguly, South Asia director. “The government should condemn this violence and take prompt action against those responsible for these attacks or face allegations of complicity.”

The report maintains that the use of communal rhetoric by members of the Bharatiya Janta Party has spurred a violent campaign against communities resulting in the killing of 44 people across India- 36 of them Muslims from 12 different states. The attacks by these vigilantes have also injured 280 people in over 100 incidents so far, according to HRW,

Detailing the statement made by prominent BJP Leaders, the report quotes Uttar Pradesh’s Chief Minister Yogi Adityanath as saying, “There is only one way to protect Indian culture: to protect gau (cows), Ganga, and (goddess) Gayatri…Only the community that can protect this heritage will survive. Otherwise, there will be a huge crisis of identity, and this crisis of identity will endanger our existence.”

It also shares a quote from Raman Singh, former Chief Minister of Chhattisgarh stating that they will hang anyone who kills a cow.

Chief Minister of Haryana Manohar Lal Khattar’s assertion that Muslims can live in India only if the stop eating cows is also included in the document.

The report categorically talks about cow protection as a political tool to woo voters and consolidate the Hindu vote bank by the ruling party by declaring communities consuming beef as a threat to Hindu culture and its way of life.

Prime Minister Narendra Modi has been indicted by HRW in the report for developing terms such as Pink Revolution and remaining mostly silent on incidents of such mob violence. Between 2014-2018, there was a 500 % increase of communally divisive language, 90 percent of this coming from the BJP in the last four years.

“Prime Minister Narendra Modi, when he was chief minister of Gujarat state and during the 2014 national election campaign, repeatedly called for the protection of cows, raising the specter of a “pink revolution” by the previous government that he claimed had endangered cows and other cattle to export meat. BJP leaders have attempted to portray the majority Hindu population as victims, whipping up fear of Muslim men who they say kidnap, rape, or lure Hindu women into relationships as part of a plot to make India into a Muslim-majority country. In the period leading up to the Uttar Pradesh state elections in 2017, a BJP lawmaker, Yogi Adityanath, the current chief minister, raised fears of a Hindu exodus in western Uttar Pradesh, which has the largest concentration of Muslims in the state”, the report states.

Among the largest cow protection networks is the Bharatiya Gau Raksha Dal (“India Cow Protection Group”), an umbrella organization registered in 2012. Its leader, Pawan Pandit, told Human Rights Watch that the network is affiliated with about 50 groups across the country and that their 10,000 volunteers have a presence in nearly every state. “Now entire India is a cow protection group because people are angered by such cruelty to animals,” Pandit said, adding that even the BJP government was not strong enough on cow protection. He denied allegations of violence by his members, saying those were spontaneous acts by local residents angered by the ill-treatment and slaughter of cows.

“The mild admonitions from BJP leaders when Muslims and Dalits are lynched over cows sends a message that the BJP supports this violence,” Ganguly said. “Instead of a government that took office on the promise of universal development, it now appears to be one unwilling to protect those most vulnerable.”

Denying Accountability : The HRW report further states that since the BJP came to power in 2014, the government has passed laws where there is a shifting of burden and consequently a presumption of guilt, that should be very rarely used because it curtails fundamental liberties. A former Additional Superintendent of Police Rich Pal Singh as accepting that the police faces political pressure to file weak cases against cow protectors.

Police Failure: The report points towards poor police investigation. And states that in one-third of the total number of cases filed, the police has, in turn, slapped cases against the victims. In 8 cases investigated by the HRW team, the police delayed filing First Information Reports (FIRs) required to begin an investigation into a crime; in two others, the cops violated procedure, even allegedly falsified details in one of them; and in four the police were allegedly complicit in the death of the victim and tried to cover-up the crime.

The reports mention prominent incidents of lynchings such as that of Pehlu Khan and Akhlaq apart from the lesser known ones to establish its key findings.

Livelihood: Measuring the impact of the acts of vigilantism in context of the livelihood of people the report claims that it found that violence by cow mobs has largely disturbed cattle trade, rural agricultural economy, leather, and meat export industries that are linked to farming and dairy business.

The report records a sharp decline in the export of beefpost 2014. The impact on the leather industry has also been adverse.

The economic impact of the acts vigilantism has largely affected Muslims and Dalits according to the report. “Muslims and Dalits have been disproportionately affected by the laws, policies, and unlawful attacks harming cattle-related industries. Slaughterhouses and meat shops are mostly run by Muslims. Dalits traditionally carry out jobs to dispose of cattle carcasses and skin them for commercial purposes such as leather and leather goods.”

The study recommends that in order to bring an end to vigilantism, the government of India should take the following measures:

-Implementation of Supreme Court directives on preventing communal violence and ensuring that individuals responsible for mob attacks are held accountable.

-Ensuring prompt and impartial investigation and prosecution of the perpetrators and instigators of communal attacks and investigate alleged police inaction in responding to vigilante violence.

-Clearly and unequivocalsignalling, through public statements and measures by senior state and high-ranking police officials, that perpetrators in mob violence cases, even those politically connected, will be fully prosecuted.

In July 2018, the Supreme Court had directed central and state governments to publicly make statements and spread the message that “lynching and mob violence of any kind shall invite serious consequence under the law.” In response, the home minister told Parliament that a panel had been formed to suggest measures to stop mob violence in the country. “We will also bring a law if that is required,” he had said.

The court also ordered all state governments to designate a senior police officer in every district to prevent incidents of mob violence and ensure that the police take prompt action against the perpetrators and safeguard victims and witnesses.