old post
Why Has the RSS the High Voltage Ayodhya Campaign on the Eve of the Lok Sabha Polls?
February 8, 2019 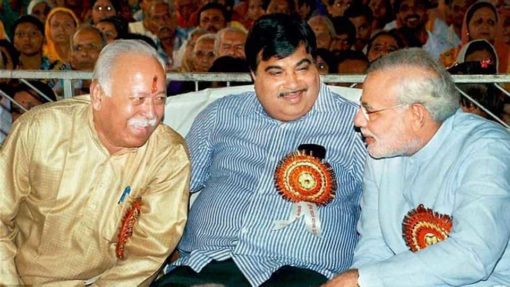 Why has Rashtriya Swayamsevak Sangh Chief Mohan Bhagwat decided to postpone the Ram Mandir stir to after the Lok Sabha polls?

After announcing the sudden shift in strategy through the Vishwa Hindu Parishad,Bhagwat has endorsed this within 24 hours, maintaining that the threatened Ayodhya agitation will be postponed till after the elections as he does not want to reduce it now to a “petty election issue.”

This is a major indication of the politics within the Sangh family, with individuals now pitted against each other in the run up to the general elections.

There is a clash between Prime Minister Narendra Modi and the RSS over the post election scenario that also holds the actual reason why the RSS has backed off from what had become a high voltage campagin over the past months for the construction of the Ram temple at Ayodhya.

RSS functionaries and its affiliates had been running a strong campaign for the temple to the point of warning the courts that they should intervene between people and their faith. PM Modi had also been targeted by some, including NDA ally Shiv Sena, for not listening to the voice of people and moving for an Ordinance or a law to enable the construction of the temple at Ayodhya.

Significantly no sooner had the central government moved to legally try and get back the tract of land under its ownership at Ayodhya, the VHP in a volte face announced that the stir had been deferred. And Bhagwat followed with an assertion that the agitation would resume after the elections—he did not state a date— regardless of which party came to power.

In what promises to be tough days ahead, the dispute between PM Modi and the RSS over the post poll strategy is spilling out into the open. Well placed sources told The Ciitzen that the RSS was almost certain that the Modi and BJP President Amit Shah who have never really endeared themselves to Nagpur, will not just fall short of the majority of 272 seats in the Lok Sabha polls, but could drop even below the 200 mark. If that happnes, the sources said, the Prime Minister would require at least 80 seats to get the tally to form the government, and this number would come from the regional allies and opposition parties.

The RSS has had talks with a number of regional parties and allies with the consensus that they would be willing to support a BJP government with a leader other than Narendra Modi. Some of this had been reported earlier in The Citizen with the RSS said to be quietly backing Union Minister and former BJP President Nitin Gadkari for the post.

Regional ally in Maharashtra, the Shiv Sena has mounted an almost personalised campaign against Narendra Modi, and is open about its intention to support any candidate other than him in a post poll coalition government. The Asom Gana Parishad that has moved out of the alliance because of the deeply controversial Citizenship(Amendment)Bill brought in by the current government and pursued strongly by the Prime Minister, has reportedly made it clear that it can be counted to be part of a BJP led alliance with a new leader at the helm.

The RSS has met and discussed the post poll scenario with regional leaders who are currently opposing the BJP, but have been in the NDA governments earlier. The list of the regional parties that have broken bread with the BJP in the past include Trinamool Congress, DMK, Biju Janata Dal, Telugu Desam, National Conference, Indian National Lok Dal, Rashtriya Lok Dal. Bahujan Samaj Party had supported from outside. The Samajwadi party and Rashtriya Janata Dal along with the Left and the Congress are the only two parties that have not directly entered into coalitions with the BJP.

The consensus from these talks, sources said, is that Narendra Modi will not be acceptable as a leader but the BJP could rely on some support if it brings a new person at the helm. Interestingly Nitin Gadkari remains acceptable by and large.

And secondly, the regional parties would not be able to support a BJP led government if the temple issue was taken up in the campaign and through the elections as this has always remained divisive and unacceptable to even those who have joined NDA governments in the past. This is the primary reason why the RSS has backed off from whipping a campaign around the Ayodhya issue, as it does not want to alienate the regional parties that it might need to rely on after the elections to form the government.

Prime Minister Modi is however clear, that he will remain in command. Either as the Prime Minister if he delivers the majority. And if not, as the Leader of the Opposition.

The RSS is not willing to sit in the Opposition if it can avoid it by stitching up a minus-Modi/Shah coalition. It is not willing to interrupt and possibly reverse the “gains” it has made in the past few years under the present dispensation and wants to keep the “flow” continuing under a less authoritarian but “harder than Atal Bihari Vajpayee” government. The broad following that Vajpayee had is tempting, the sources said, and after these five years the RSS has realised that a seemingly more easy going personality than Modi at the helm was the only way to keep in power.

The sources were categorical that one, Modi and Shah are not willing to give up control; and two, the RSS is working to ensure that they bow out to a coalition run by the BJP, with a large bouquet of regional parties.

Currently Narendra Modi is facing the heat of isolation with the regional NDA allies also preferring to keep a distance. The RSS, by backing off on the Ayodhya issue, has sought to create a space that it could work to its advantage and for installing a new leader on a broad based coalition it wishes to bring to power. Interestingly, the sources said that the support for Vajpayee had led the RSS top brass—never enamoured of the individualist politics of PM Modi—to project Gadkari as a possible replacement. He has a better working relationship with the opposition parties, within the BJP having been the party president, and with the corporates that have also started reacting adversely to the current authoritarianism.