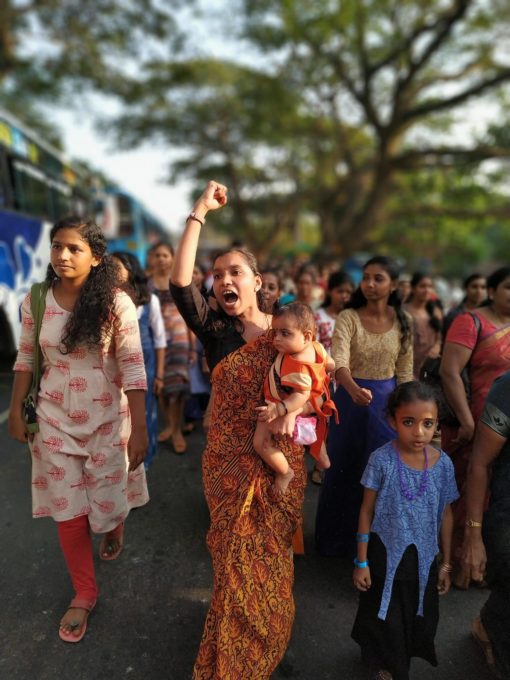 The left in Kerala got a head start over the right-wing reactionary forces in its battle to uphold renaissance values as it passed the test of mass-mobilisation with the historical success of the women’s wall, covering a distance of 620 km on the western side of the national highway. The wall witnessed a massive participation of more than 50 lakhs women who were determined to fight for gender equality and justice.

Kerala is witnessing political and social turmoil ever since the Supreme Court’s judgment to strike off the age-old custom of restricting the entry of women of menstruating age into Sabarimala temple. Various Savarna organisations like RSS, Brahmana Sabha, Nair Service Society (NSS), Yogakshema Sabha, Kshathriya Kshema Sabha, Sambava Mahasabha, The Kerala Catholic Bishop’s Council (KCBC) and political formations like Bharatiya Janata Party, Indian National Congress and Indian Union Muslim League have vehemently opposed the entry of women into Sabarimala. Nilackal and Pamba were turned into a battleground for the right-wing groups who violently bunged the women who tried entering Sabarimala. In November, journalists including women were heckled and battered. More than 45,000 police personnels were deployed at Sabarimala by the government in order to avoid bloodshed. Earlier, the BJP chief Amit Shah had also threatened to pull down the current ruling government in Kerala when the police initiated a crackdown on right-wing groups who flouted and mustered against the Supreme Court verdict. Foot soldiers to the Hindutva political formation widely circulated fake photographs and fake news of police atrocity in Sabarimala. The Sabarimala verdict is a golden opportunity for the right-wing organisations to deepen its political base in the name of protecting “Hindu Culture”.

In this pandemonium, political observers have anticipated a second “liberation struggle” in Kerala. Chief Minister of Kerala, Pinarayi Vijayan, while emphasising his political position in favour of women's entry into temple, traced the history of Kerala’s renaissance movements and mentioned the contributions of social reformers like Ayyankali, Sree Narayana Guru, Chattambi Swamikal, Chalilakath Kunhahmed Haji, Vakkom Moulavi, EMS, A K Gopalan, Mannath Padmanabhan, V.T. Bhattathiripad and Haleema Beevi, Akkamma Cherian and many more. “Our Renaissance leaders taught us that some customs are meant to be broken”, he said. 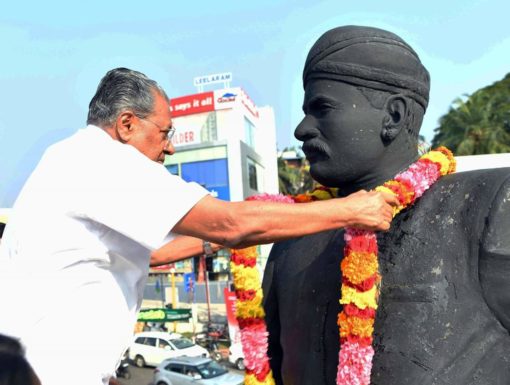 The politics around Sabarimala is not only about gender or Brahminical ritual purity, it also has a lot to do with the contesting claims over tradition, customs, deity and temple. The ruling government submitted an affidavit to the Supreme Court, stating the secular character of Sabarimala and acknowledged the Tribal and Buddhist contestations over ownership of the temple. In all true sense, the present government of Kerala has declared an open war against savarna formations and its politics. Recently, Kancha Ilaiah said that “the demand to restrict women’s entry into the temple is backed by the upper caste men of the RSS. The Chief Minister has rightly called it an ‘upper-caste conspiracy’. Vijayan has started mobilising the OBC, Dalit and Adivasi groups to counter the Brahminical anti-women and anti-Ayyappa politics”.

Last week, Janmabhumi, the mouthpiece of BJP in Kerala came up with a flagrant cartoon exhibiting savarna arrogance. The cartoon cautioned Kerala for the making the son of a toddy tapper and a man of Thiyya origin, chief minister of the state. 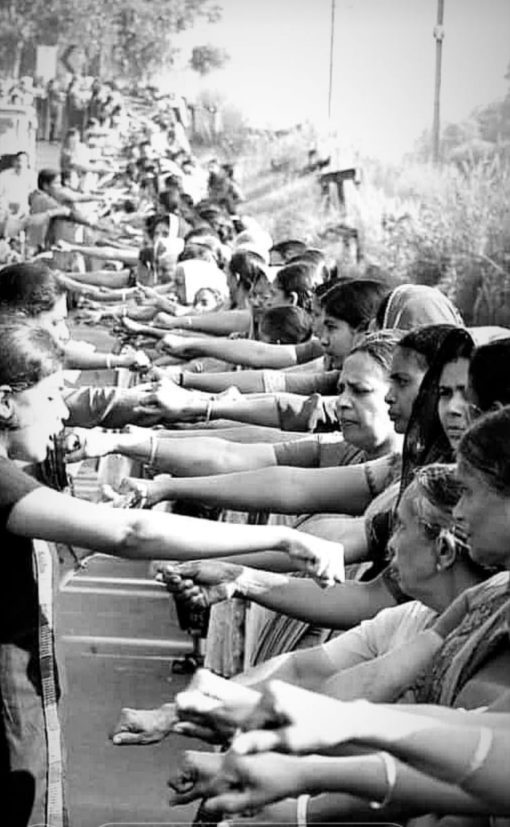 While the women of Kerala took the lead role in this battle against Brahminical forces, over 176 organisations campaigned for the women’s wall with patient squad works, door to door campaigns, street plays, public meetings and demonstrations. The month of December 2018, witnessed an organised effort, not only to fight the sangh parivar, but also against anti-renaissance politics, Brahminical patriarchy and misogyny.

On 26 December 2018, as a counter campaign to women’s wall, the Sabarimala Karma Samithi (SKS), an organisation associated with the Hindu Aikya Vedi, piloted the Ayyappa Jyothi campaign across Kerala. People influenced by the Brahminical appraisal of the history and practices of Sabarimala participated in the campaign with the open support of NSS.

While historically, a section of conservative women, informed by the Brahminical common sense, have stood with reactionary forces, Kerala is also the land of Nangeli, who protested against the breast tax by cutting off her breasts. The more than 50 lakhs women who joined each other’s hands for dignity, equality and progressive politics are Nangeli’s successors and they are determined to not let Kerala turn into a lunatic asylum. 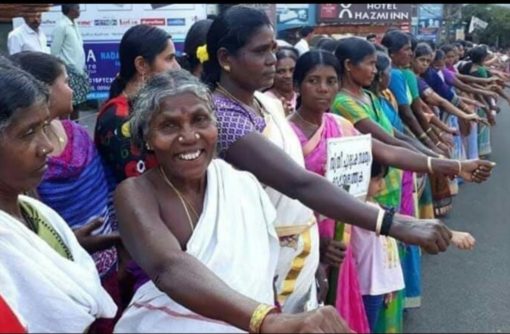 A day after the formation of women’s wall, two women, Kanakadurga and Bindu, climbed the shrine at Sabarimala and offered prayers around 3:45 am, marking January 2, 2019, as the day when Dalit women shattered the shackles of Brahminical patriarchy. A new history is scripted, and Kerala is witnessing nothing less than a second renaissance movement.

The formation of the Women’s Wall is only a successful beginning. Kerala’s public sphere is still contaminated by Brahminical values, practices and symbols, and without an organised political force committed to the values of renaissance and anti-caste politics, meaningful resistance against the sangh parivar is impossible.

Read More:
“Sabarimala is more an issue of gender equality than of religious freedom”
The Sabarimala Verdict: Whose Morality, Whose Freedom?