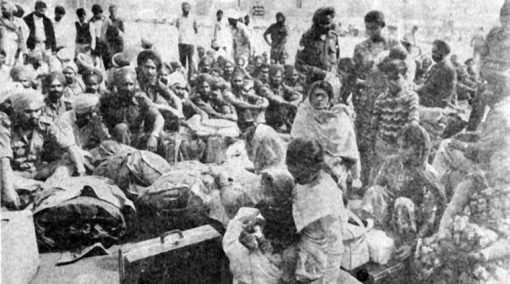 The jail for life conviction of Delhi Congress leader Sajjan Kumar in 1984 anti-Sikh riot case is too little and too late judgment by the Delhi High Court. The Sikh’s killings occurred a day after Indira Gandhi was assassinated by her Sikh bodyguards October 31, 1984.

There were other Congress leaders, besides Sajjan Kumar like HKL Bhagat, Jagdish Tytler and others who organized programs against the Sikh community from Nov 1-3 1984. The all enjoyed political patronage and escaped trial and some are long dead.

It was at the behest of Rajiv Gandhi that the Congress leaders in Delhi organized “lumpen” elements in mob formation that hunted Sikhs in their houses and killed them. There was fear everywhere and the storm troopers were gunning for life of the Sikhs.

As a school boy I was the witness of that horrifying tragedy. I was living in Swasth Vihar colony across the Yamuna, the bridge across the ITO. On those horrifying days, no one dared to come out on the streets. We were sitting on the terrace watching the crowd moving menacingly on the road. A few came down on my building shouting, is there any ‘Sardar’ in this building, I loudly yelled ‘NO’ and they left satisfied.

There was an economic angle to this 1984 anti-Sikh riot. Many Sikhs had flouring businesses in Delhi. They were singularly targeted and their businesses were destroyed in an organized manner.  I was witness to the looting of the Sikh shops. My memory is still fresh with ‘lumpens’ looting TV sets from the Sikh shops and running away with it.

There was mayhem, carnage and total breakdown of law and order in Delhi. I heard from friends that many Sikh families took shelter in JNU and Jamia universities. Some in the posh locality moved to the star hotels for security.

With some amount of certainty i can dare say that Congress +RSS + BJP were hand in gloves in orchestrating the anti-Sikh violence in Delhi.

It is only RSS that can bring the foot soldiers in such a short notice and the Congress leaders who had RSS bend of mind took help from the saffron organization.

These words assume credibility because as many as 49 people belong to RSS BJP was listed in the FIR of 1984 anti-Sikh riot.

My premonition is Congress has opened its coffers and distributed money to each person to create mayhem. They may also have got the assurance that no harm may happen to them and all would enjoy state protection.

Now almost 35 years have elapsed to that event, i am sure if someone goes on memory trail and get the bottom of the truth, the beans may spill on how much money was distributed for orchestrating the 1984 riots.

My general assumption is that all such riots are engineered and orchestrated. A lot of money changes hands in such organized crimes.

In all such crimes the victims are always taken by surprise and are off guard and unprepared to retaliate. In those places where there is preparedness to face any such eventuality riots never takes place. It’s only where rioters know well that no harm can happen to them and they can get away with all the stains of blood on their shirts they go on the prowl to kill.

This also reflects on the outlook for the political parties and its leaders. The Congress, the BJP and the RSS which are outwardly at the loggerhead fighting an ideological battle now were united in 1984 to teach the Sikh a lesson.

There was no ideological tussle then, overnight Sikhs became anti-national just because someone among killed Mrs Gandhi who was responsible for ‘Operation Blue Star.

The 1984 anti-Sikh riot was my worst memory of human tragedy that I witnessed from very close quarters. How people become enemy of each other even though they have lived together for long was the lesson I have stored in my collective consciousness.

My general submission is that ant- Muslim riots that break out in India every now and then too follow the same pattern and have the same tone and tenner. However, whether justice will ever come to them is something that remains even uncertain to them?

Well, its only the element of hope that keep every Muslins faith in India’s judicial system and they hope that justice will come to them sooner or later but it will never be denied.