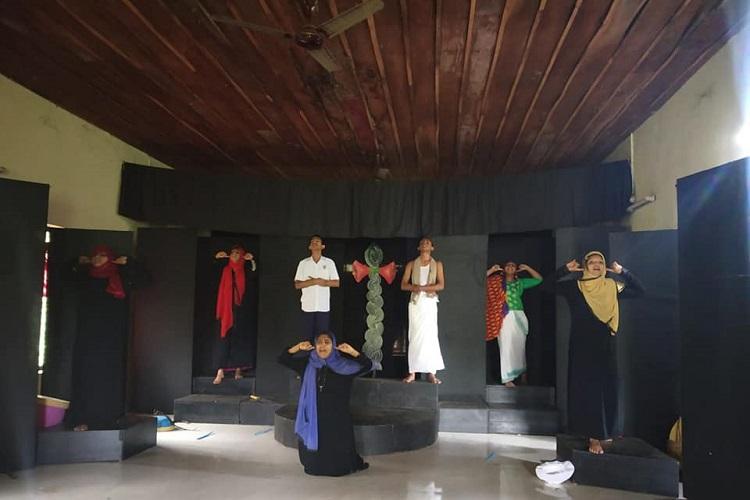 Kerala witnessed yet another controversy when Memunda Higher Secondary School, Kozhikode, decided to not stage the play Kithab for the State Youth festival. The play portrays a young Muslim woman’s desire to call out azaan or vaang – a call for prayer in Islam performed by mukkiri (one who gives azaan).

Directed by Rafeeq Mangalasseri, the play was well received during the District Youth festival. The artists even received a Grade A for their performance, but later landed in controversy when certain Islamic organisations like Sunni Yuvajana Sangam (SYS), Social Democratic Party of India (SDPI), Campus Front of India (CFI) and others protested against the play as it hurt their religious sentiments.  In response to Kithab, the SDPI staged a counter play titled Kithabile Koothara across Vadakara.

After the violent protest led by some of the radical Muslim organisations, the Memunda Higher secondary school issued a press release undersigned by the head, stating that the school authority will refrain from staging Kithab in the upcoming District Youth festival.

According to the complaint filed by the Muslim Students Federation (MSF), the play defames Islam. Perhaps Kithab appears to be “defaming” a certain religion because it exposes the vulnerability of women in that respective society.

The play ridicules the different forms of discrimination faced by women in the Muslim community. It begins with a young girl trying to steal fried fish from her own house. She challenges the existing custom in her society wherein women are not given the food they desire, while men get everything.  The reason behind this discrimination, as per the father in the play is that since women are made from the ribs of men, they are subordinate and hence cannot have the rights that men are entitled to. Further, the father insists that his daughter cover her head with parda as a woman without parda may invoke desire in other men. In one of the scenes, the wife of a mukiri reveals how, in following the Kithab or Quran, a woman’s desires are suppressed by men.

Since the play raises questions about women emancipation in Muslim society, many religious organisations demanded that the play should not be staged. Fearing the consequences, the school also chose not to send its students for the State Level Youth Festival. The series of events however, has resulted in the denial of the school children’s right to expression. Even though the students have approached the court seeking their right to stage the play, the court has put forth the school management’s decision over the children’s fundamental right to express.

Kithab is an independent adaptation of Malayalam writer Unni R’s short story Vaang and the characters portrayed by the author in the play are fictional characters.

The ban has taken place amidst widespread protests in the state of Kerala on the Sabarimala issue. While the Supreme Court passed a judgement in favour of women’s right to entry into the temple, women have been denied freedom of expression especially for questioning their denial of entry into the temple.

With the rise in communal agendas against one another, what some of these fundamentalist groups fail to understand is that the artists have a right to creativity which is not limited to any particular community, caste or religion. Earlier this year, Malayalam writer, S Hareesh’s novel Meesha faced similar attack when Mathrubhoomi weekly had to withdraw his works after the right wing Hindu groups’ threats. The same Hindu fundamentalist groups approached the Supreme Court seeking a ban on the writer’s creativity. Last year, renowned Malayalam writer and Sahitya Akademi award winner KP Ramanunni received an anonymous letter threatening him to convert to Islam within six months for using Prophet Muhammed as a protagonist in his novel Daivatinte Pustakam.

The culture of banning artists and their work needs to stop. The present scenario in our country needs a free flow of ideas, a new renaissance. The ongoing protest against Kithab play has only achieved in silencing an artist creativity and snatching away the opportunity of some budding artist.

You can watch the play here.

Read more:
After Eminent Malayalam Writers Support S Hareesh, Writers in Other Languages also Come Out in His Support
“No one can curb my right to speech,” says Konkani Writer Damodar Mauzo
The Wagon Tragedy: Painting a Saffron Past