old post
“My boyhood was ending and I was becoming a man, but I faced this future without a home”
November 26, 2018

A Naga Odyssey: My Long Way Home is Visier Meyasetsu Sanyü's kaleidoscopic sixty-year-long odyssey to find peace, tranquillity, and forgiveness for others, vividly told against the rich tapestry of the Naga quest to be free. The book tracks Visier’s fascinating journey: from a barefoot village schoolboy to a professor, from indigenous religion to Christianity, and from small-town life to appearances before the United Nations. The following is an extract from the chapter "Prelude: 1956" of the book. 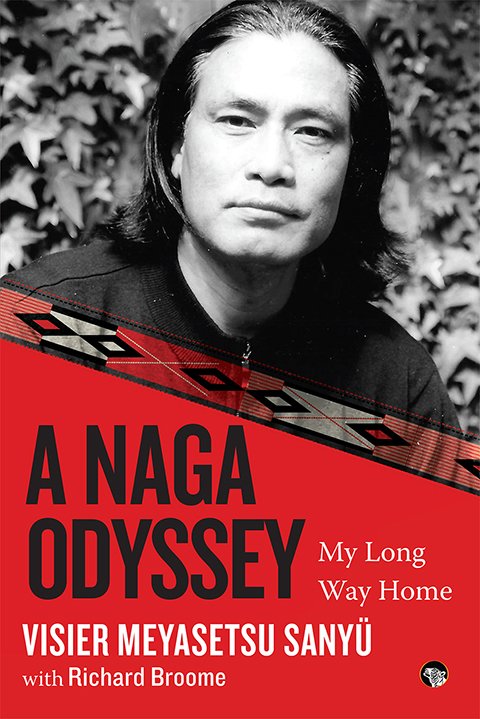 Visier has been able to cross the border between his own proud Angami Naga clan, which sees Sakhrie (killed in a jungle in 1956 by fellow Nagas) as its hero, and another Angami Naga clan that produced the legendary Phizo, who died in exile in London in 1990. He crossed the border between a Naga world of rites hallowed by tradition and a Naga world of Christian beliefs and practices. He has managed to traverse pride in the gallant history of his village, Khonoma, and the trauma at its destruction. He has crossed tribal borders to understand other Naga groups, including those in India and Myanmar separated by borders drawn on a postcolonial map. He has crossed a border between the gifted Nagas and their talented neighbours the Mizos, one of whose women, Pari, Visier married. He has traversed the gap between Nagas and the people of the rest of the Indian subcontinent, many of whom Visier has come to know extremely well. He has crossed the education divide between a cutoff mountain village and the world of academia, where he became Professor Visier Sanyü to add to our knowledge. He crossed the large ocean between the landmass that contains South and Southeast Asia and the even bigger landmass of Australia, where Visier and Pari spent many years raising their three children. Through his friendships there he crossed the border between Indigenous Australians and non-Indigenous Australians: Visier is an indigenous non-Australian who became a non-indigenous Australian.

And more. One after another, Visier’s challenging border-crossings come alive in this autobiography. The reader can feel the author’s emotions at different transitions: pride, wonderment, quandary, anger, forgiveness, grief, hope, despair, longing …. The author recalls these transitions honestly – we get to know his mind and heart. And the scenes around him at successive points are vividly painted.

Many Indians see Nagas as Indian. Many Nagas do not now think of themselves as Indian. Whether a close link is asserted or denied, knowledge of one another is scanty or close to zero. Those in India or elsewhere who would like to get to know Nagas and their history cannot do much better than to read Visier’s remarkable, if in places thorn-filled, story.

In a crucial sense, every human in the world is like each of us. In another equally significant sense, every human in the world is different from all of us. Visier’s human, universal story is also a unique odyssey, unlike any other, which is also true of the journey of the Nagas as a people. There is much to be sad about, much to marvel at, much to be grateful for, and much to learn in this account of his life, his family, his clan, and his people. May there be many blessings in the story that remains!

‘Visier’, ‘Visier’, ‘Visier, wake up!’ I heard my mother Niditono calling me through my dreams. I roused and remembered: this was a special day on which I would begin my journey into manhood. Six months later these old certainties were thrown into chaos when the Indian Army invaded our village. As the year 1956 unfolded, traditional life gave way to calamity and violence, which sixty years later led to the telling of my story in faraway Melbourne.

I went to bed excited on that chilly winter’s night in early 1956. Weeks of preparation that seemed to last an eternity were finalised. Tomorrow was a key day in my life as a five-year-old Naga boy. I would perform sekre and be welcomed into the men’s long house, the morung of my clan, with all its rights and responsibilities. As I stirred, the intoxicating smell of fermented soya beans wafted through our bamboo and thatch house, instantly filling my nostrils. My village of Khonoma in Nagaland was already in motion. Cockerels were crowing and dogs were barking, anticipating the excitement to come, and the village pigs and cows were already scouring the earthen paths and filling their stomachs. This was the beginning of the tenday Sekrenyi, the Festival of War, the most important celebration of the Naga year, during which a new crop of boys began their odyssey to become men.

For more than a week Khonoma was a cacophony of noise and endless bustling activity, as tradition was acted out by kinsfolk through rituals and the consumption of food and rice wine. Our clan was one of three in our khel, a super-clan group, and there were three khels in our village. Each clan initiated about fifteen or twenty boys in 1956, so the ten days involved everyone in Khonoma. Morungs across the village, perhaps ten of them, hummed with chants, shouts and revelry. In 1956, few saw clearly, certainly none of us wide-eyed boys did, that Sekrenyi was in a death spiral in the face of modernity.

Within weeks of my Sekrenyi our village was gripped by another momentous event, not unrelated to modernity. This time it was not an event steeped in tradition, but one that rode the shock waves of foreign intervention, which engulfed the Naga ever since the British first invaded Nagaland in the 1830s. Two important men of the village, who were leading figures in Naga politics and the Naga National Council, fell out. This was not a dispute acted out in the confines and protections of tradition, but one rooted in the politics of Nagaland’s destiny, which is still the question of today. How were the Naga to live into the future in this age of nations; especially in the presence of heavy-handed Indian domination?

The two men of Khonoma in dispute were my mother’s clansman Theyiechüthie Sakhrie, General Secretary of the National Naga Council, and Angami Zapu Phizo, its President. These two giants nurtured the idea of the Naga nation and strengthened the ideology of the Naga National Council, but fell out over how to achieve Naga independence. They and their followers disputed how the Naga should handle their new colonial problem. Sakhrie and his supporters sought an independent Naga destiny though gradualism and peaceful negotiations with India over time, while Phizo and his followers sought independence now, by violence if necessary. Phizo had supported the Japanese during the Second World War because of impatience; so strong did independence burn within him that he declared Nagaland independence on 14 August 1947. In September 1954 he established the Free Naga Government, declaring Nagaland a ‘free and independent nation’. This led to military occupation by the Indian Army and a reign of terror on Naga villages.

Soon after these disturbances, Sakhrie was found murdered in the jungle. His body was carried into the village, and as a clan member my mother donned her best shawl and sat with him through the night. Fear struck the village. People wept and wailed for this political murder was outside tradition. It fractured the villagers and as a consequence divided the Naga for a generation…Terror gripped our hearts and rumours spread that the army’s Sikh Regiment was being sent in. The Sikhs were renowned as the toughest, battle hardened unit of the Indian Army – they would show no mercy. Calamity was all around. As the Sikh regiment neared the village, almost 2,000 villagers fled with what they could carry for an uncertain future. Only one clan stayed behind as its members chose to negotiate with the Indian Government and opt for autonomy within India. Mayhem split my village asunder. The majority who left watched from a distance as the army fired Khonoma – then they scattered. Our home village burned for twelve days and was totally consumed.

That is how I – a boy of five – came to live in the jungle for over two years….My boyhood was ending and I was becoming a man, but I faced this future without a home.

Visier Meyasetsu Sanyü is an Elder of the Meyasetsu clan of the Angami tribe, Khonoma, Nagaland. He has a Bachelor of Theology, a PhD in History, and was the inaugural Head of the Department of History and Archaeology at the University of Nagaland. He is the current President of the Overseas Naga Association, an International Elder of Initiatives of Change, headquartered in Caux, Switzerland, and is a Board member of the Melbourne Interfaith Centre.
Richard Broome is Emeritus Professor of History at La Trobe University in Melbourne, Australia, and the author of twelve books, including three on Indigenous Australians, notably Aboriginal Australians 4th edition (2010).