Zakia Jafri Case back in the Spotlight 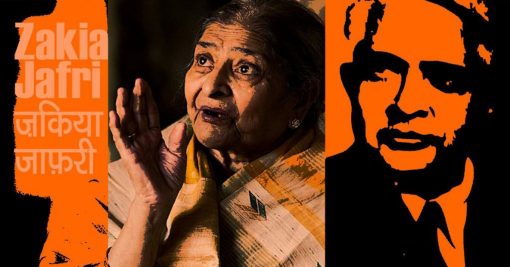 Zakia Jafri’s Special Leave Petition (SLP) against the order of the Gujarat High Court (dated October 5, 2017) dismissing her challenge to Magistrate Ganatra’s Order (dated December 26, 2013) and confirming the closure report of the SIT (dated December 8, 2012) came up for hearing before the Supreme Court of India today. The matter has been placed for hearing on Monday, November 19, 2018.

We argue in the present SLP, how, the order of the Gujarat HC records that the Magistrate has considered the closure report of the SIT and found no substance in the complaint of the petitioner dated 8.6.20106. Thereafter the Court erroneously goes on to say that the Magistrate provided detailed grounds for not accepting the protest petition of Ms Jafri. This, in our submission, is factually incorrect.

It is our case that the Magistrate wrongly held that it was beyond the scope of his powers to direct further investigation. Besides, key and vital issues placed before the Magistrate, detailing our case and making out a sound and substantiated case of criminal conspiracy and abetment, we argue,  have been not duly considered by the Magistrate or the High Court.

The SIT filed a closure report in 2012, without giving an audience to Ms Jafri as is her legal right. Thereafter she had to petition the SC again in a fresh SLP (Nos 8989/2012) to acquire the full and complete Investigation records, reports and documents. These we obtained by order of the Supreme Court on 7.2.2013 after which we were given two months to file the protest petition.

It is only after that order of the SC in February 2013,  that the CJP legal team analysed close to 23,000 pages of documents that became the basis of the detailed construct and narrative of the protest petition. It is through this protest petition that the petitioner has drawn out the lacunae in SIT’ s Investigation and constructed a more comprehensive and prima facie case for large conspiracy, abetment, dereliction of duty by first responders and hate speech, which in the petitioner’s opinion, is squarely made from the documents on record.

In the present case before the SC we argue that it will be abundantly clear from a close perusal of the protest petition that Ms Jafri has substantiated further acts of a larger conspiracy by detailing evidence about the prelude and build up of a volatile atmosphere prior to 27.2.2002, the post-mortems being conducted in the wide open in violation of statutory provisions, no preventive arrests and delayed Implementation of curfew in Ahmedabad despite widespread Violence from 27.2.2002 onwards among other issues.

Besides, we argue that, an analysis of police control room (PCR records) shows dereliction of duty by first responders. The conspiracy, as constructed in the protest petition also provides proof of the also reporting and misleading constitutional and statutory authorities and the destruction of records relating to minutes of meetings, police logbooks, wireless messages by those at the helm of power in 2002.

Undoubtedly, the Complaint given in writing to the DGP of the State of Gujarat by Ms Zakia Jafri on 08.6.2006 was for the period between February 27, 2002 to May 2002 where it is alleged that the larger conspiracy of officers and bureaucrats (63 in numbers) for committing the offence under section 302 read with 120(b) of te IPC has resulted into the loss of thousands of lives. Such acts, according to the said complaint, allegedly indicate larger conspiracy for the entire State which has not been restricted to particular case or incident of riot.”

However, despite recognizing that the complaint dated 8.6.2006 and the protest petition dated 15.4.2013 dealt with events between February 27 and May 2002, we argue that she, however, leaves us remedy-less on the vital aspect of no adequate investigation into the larger conspiracy and disregarding of the same by the Magistrate.

It is on these issues as also on the conscious and erroneous clubbing of the Zakia Jafri complaint with the single incident at Gulberg society (that took place on 28.2.2002 and according to us is just one of 300 incidents and one link In the wider conspiracy) that the lower courts have erred and we seek correction and remedy.