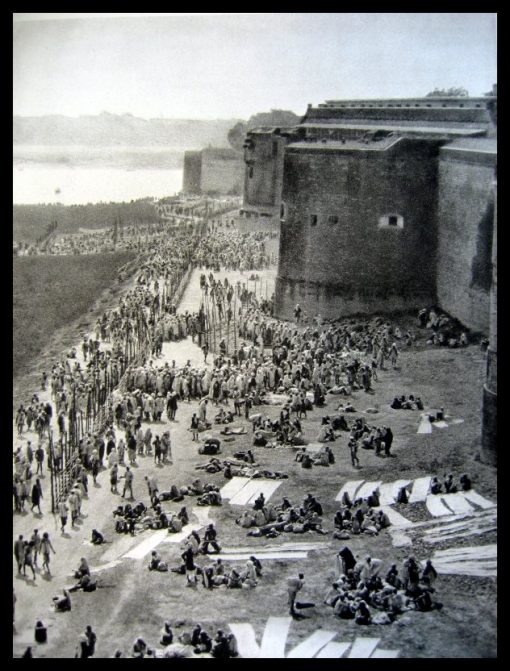 'Allahabad on the walls of the fortress at time of a pilgrimage', Martin Hurlimann, 1928 / Image courtesy Reckontalk

Historian and author of Pilgrimage and Power: The Kumbh Mela in Allahabad, 1765-1954, Kama Maclean writes, “Cumming’s question of how Muslim rulers and Hindu worshippers shared the space is pertinent, as the British themselves looked to and were frequently bound by precedent. Contrary to Cumming's assumption, the relationship between Muslim ruler and Hindu worshipper was not always antagonistic; indeed, it was not until the nineteenth century that communal identities solidified.”

This bit of information is relevant now after Yogi Adityanath has changed the name of Allahabad to Prayagraj, claiming that Prayagraj was the original name of the city. The New Indian Express, which quoted Adityanath saying this, titled their report, “Allahabad to Prayagraj: Renaming ‘Islamic-sounding’ places not new for Yogi Adityanath”. The historical evidence of the evolution of the Kumbh mela and the Allahabad Fort, however, suggests labelling the name “Allahabad” Islamic is too simplistic. Adityanath's claim, on the other hand, that the “original” name of the place now called Prayagraj does not stand the test of historical evidence.

The name Allahabad, which means “abode of God” was given by Jahangir, the Mughal ruler, because he recognised the place as a Hindu holy site. Maclean cites several sources to say that Jahangir tried to destroy the Akshayabat tree but failed after several attempts. James Forbes, the author of Oriental Memoirs published in 1813 says that this convinced Jahangir of the sanctity of the place and he named Prayag as Allahabad. The name "Allahabad", however, predates Jahangir, says Maclean, and writes,

…the names Ilahabas and Ilahabad were written on coins minted in the city from the time of Akbar (the terms are interchangeable, but the latter became dominant by the Great Mughal's death). The issue of the town's name has been contested in recent years. Some maintain that the town was named not after Allah but after ilaha (the gods), and this is reflected in contemporary Hindi usage, in which the town's name is spelled and pronounced as Ilahabad. Shaligram Shrivastav, the author of Prayag Pradip, contended that Akbar purposefully gave the town a name that might be construed as both Hindu (Ilaha) and Muslim (Allah); the trend in recent years, however, has been to see it as purely the latter.

The rechristening of Allahabad as Prayagraj is a culmination of this trend. Adityanath, however, has also added “raj” to suggest the dead Saraswati river. The fascination of the Hindu Right in India with the Saraswati once again is a recent phenomenon and does not fit with Adityanath’s claim of an “original” name for Allahabad. The Hindu Right tried to unsuccessfully excavate the river when it was inpower from 1995 to 2004, and more recently, when the Bharatiya Janata Party came to power in 2015. The state government of Haryana began the excavation for river Saraswati soon after.

These facts clearly show that Adityanath’s recent name changing spree has little to do with “origin” of the place and is more in tune with the ideology of the Hindu Right which has very little historical or scientific evidence to offer.