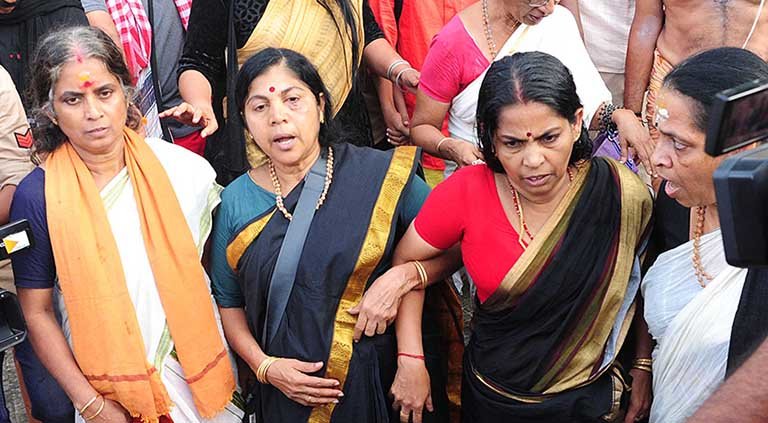 Attacked woman along with her relatives/ Image Courtesy: Deshabhimani

On Tuesday morning, protesters backed by the RSS-BJP at the Sabarimala Temple could be seen screaming “beat her to death” soon after the entry of a 52-year-old woman, suspecting that she belongs to the 10-50 age group. The woman, Lalitha, who hails from Thrissur had reached the temple along with her family members to perform special ceremonies for her newborn grandson. Mridul, who was accompanying Lalitha had also been attacked brutally by the violent protesters. So far, 200 people have been booked related to this case.

Following the reopening of the Sabarimala Temple for a special one-day session on Monday, November 5, protesters have resorted to massive violence in the temple premises. On Tuesday, the protesters raged, intimidated and sent back women devotees from the 10-50 age group, who were attempting to enter the temple.

Two women were apprehended on their way through Pamba and threatened after devotees found out they were without the holy kit (Irumudi Kettu). Shouting Ayyappa slogans the protesters stopped them from advancing any further. This was despite the fact that they were above 50 years. Like devotees, the camera persons of various Malayalam channels had also been targeted.

RSS leader Valsan Thillankery, who had been named in political murders in Kannur, has set up camp in the premises of the shrine and the protesters could be seen acting as per the directions of the RSS leader. The RSS-BJP brigade which has been leading violent protests in the name of saving culture and tradition, itself violated the traditions of the temple. In a video from the ground, Valsan Thillankery could be seen standing on the holy steps that lead to the shrine without an “irumudi kettu”, the holy kit.

A representative of the Travancore Devaswom Board said that standing on the holy steps as part of protest goes against the existing practices in the temple. Devaswom board has also sought an explanation from the Tantri- chief priest- of Sabarimala Temple over the BJP state chief P S Sreedharan Pillai’s remark that the Thantri had discussed the much controversial option of closing down the doors of the shrine if women of menstrual age enter the temple. On Monday, Pillai had been caught revealing in a closed meeting that the ongoing series of agitations and violent protests were planned and orchestrated by the party. Devaswom Board member, K P Sankar Das said that necessary actions will be taken based on Pillai’s explanation.

In another incident in Nilakkal, BJP leaders threatened police persons who were deployed there for Sabarimala duties. The police stops private vehicles in Nilakkal and lets the devotees proceed to Pamba in public transportation. The state-owned KSRTC has regular shuttle services between Pamba and Nilakkal to take devotees to the temple. However, a group of BJP leaders including A N Radhakrishnan and P K Krishnadas had heated arguments with the police for not letting them proceed to the temple in their personal vehicles.

After the temple opened on Monday (November 5) at 5 p.m. for the special one-day session amid tight security, there were violent protests by devotees late into the night and early on Tuesday as they found out women from the hitherto banned age group were approaching the shrine.

The first protests were witnessed late on Monday night, when a 30-year-old woman along with her husband and children were stopped. Following the violent outbursts, the woman retreated. She was sent back home along with her family early on Tuesday morning under police security.

Although, the Kerala Police has literally taken over Sabarimala posting a dozen women officials over 50 years of age near the shrine, no woman devotee from the hitherto banned age group has been successful in entering the sanctum sanctorum, despite the Pinarayi Vijayan government promising to carry out the September 28 Supreme Court verdict.

According to figures, more than 10,000 pilgrims had taken the pathway to the temple hilltop, compared with less than 1,000 devotees the same day last year. The temple will shut its gates at 10 p.m. on November 6.

The temple had witnessed massive protests between October 17 and 22 after it opened for the first time following the apex court's ruling, removing the ban on the entry of girls and women of menstruating age to the Lord Ayyappa shrine.

The temple town has currently been put under one of its most stringent security arrangements. There were more than 2,300 police officials posted at various points up the pilgrimage path after the state took over the shrine's security on November 3. Several metal detectors have been kept at various points and crowd combating arrangements have also put in place.

On the other hand, the Supreme Court is set to hear all the review petitions on November 13.

The Kerala government has announced it would implement the apex court's ruling, pitting it against the Bharatiya Janata Party (BJP) and numerous Hindu groups which have been up in arms against the verdict.

(With inputs from IANS)