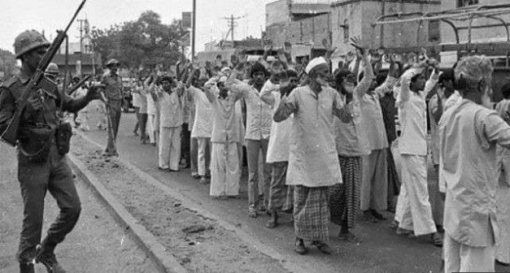 “For me the judgment (the Delhi High Court ruling giving life imprisonment to 16 PAC men for the Hashimpura massacre) is not enough, I received the news with mixed feelings. The small fry have been punished, of course they should be but they are the small fry who executed the orders. Who gave the orders? Not one has been arrested,” said former Superintendent of Police Vibhuti Narain Rai, who has pursued the Hashimpura massacre case for 31 long years.

Speaking to The Citizen after the verdict that has brought some relief to the survivors who have been seeking justice for three decades now, Rai said that in his long experience as an IPS officer, the massacre was not decided upon at the level of sub-inspectors and constables. He said that in the list of convicted PAC men, the highest rank was that of a sub-inspector.

“And I can say that if the order to kill was coming from his level, then the others including the head constables and constables could have refused to obey. Bigger men were clearly involved, but they have escaped,” Rai said.

“Yeh sab to chote mulazzim hain, the big fish have escaped,” he reiterated.

Rai was the Ghaziabad SP and came into the picture as the PAC brought the men they had rounded up in Hashimpura into Ghaziabad district before mowing them down.

On the night of May 22, 1987, about a thousand male residents of Hashimpura (the figures vary) were rounded up from their homes by the U.P. Provincial Armed Constabulary. While most were sent to jail, 40 able-bodied men were packed into trucks and taken by the PAC's 41st Battalion led by Platoon Commander Surinder Pal Singh to Muradnagar and Modinagar, where they were shot dead. Their bodies were disposed of at two different spots, in Muradnagar, and in the Hindon canal.

Rai said that he and Naseem Zaidi, the Ghaziabad District Magistrate at the time, had just returned to their homes after seeing off a VIP, when he was approached by police with news of the incident. The details were unclear, but enough for him to call the DM and tell him “there has been a very serious incident” and for them to rush to the first spot. That was in Muradnagar. It was about 11.15 pm by then. He said that amidst the dead bodies they found a survivor within half an hour, one Babudin who gave them the first account of the gruesome attack. By the time they found the next lot of bodies they were sure the PAC had been involved.

At the time, Rai said, there was a strong PAC contingent of about 3500 to 4000 men stationed at Meerut, and he told the DM that they would have to approach a higher authority for the investigation to avoid any resistance and conflict. He said they had heard that the Uttar Pradesh Chief Minister Veer Bahadur Singh was passing through at the time, and they rushed to stop and brief him about the incident.

“I know many said that Veer Bahadur Singh was directly involved, but I do not think he was as he almost fainted when we gave him the news,” Rai said.

He went on to add that Singh, a Congress chief minister, subsequently ensured that the investigation was deliberately botched, but that initially in his view Singh did not have any information about the mass executions. While this may or may not be so, Rai admitted that the investigation was completely messed up to the point where the guilty went scot free. He said the commander is one of three accused who have died in these years, and the 16 who remain have only now been sent to jail for life by the Delhi High Court.

For Rai, while this is more than welcome, it is not enough. Who gave the orders? That remains the question for the SP who is still looking for justice for the victims and survivors in the Hashimpura massacre case. He has some ideas, but no evidence. Some clues in the initial couple of years in the CID papers of the investigation, some names that subsequently disappeared from the records altogether, as the Congress and successive governments ensured that the investigation netted the small fish, and set the big fish free.