old post
“Activists arrested not for dissent but for involvement with banned organisation”: Maharashtra Counter Affidavit In SC
September 5, 2018 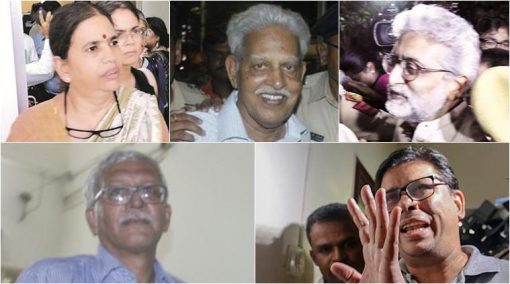 The Maharashtra government has filed a counter-affidavit in the Supreme Court against the writ petition that had challenged the arrests of five activists in the Bhima-Koregaon case.

The writ petition was filed by Romila Thapar, Prabhat Pattnaik, Devaki Jain, Maja Daruwala and Satish Daruwala, alleging that the arrest was “an exercise to silence dissent, stop people from helping the downtrodden and marginalized people across the nation and to instill fear in the minds of the people.”

The counter affidavit affirmed by the Assistant Commissioner of Police, Swargate Division, Pune Shivaji Panditrao Pawar maintains, that the writ petition is based on the individual perception of the petitioners about the “eminence” of the arrested persons, media reports and statements by “activists and intellectuals” condemning the arrest, and not on the basis of any direct knowledge of incriminating facts.

The counter affidavit, as reported by Live Law, traces the history of investigation which started with the registration of the FIR on January 8, 2018 on the basis of a complaint by one Tushar Ramesh Damgude alleging that the violence in the Bhima Koregaon parade was incited by inflammatory songs and speeches. And that these were performed by Kabir Kala Manch at the Elgaar Parisad held at Shanivardwada, Pune on December 31, 2017.

Two, the materials recovered from the laptops, pen drives, memory cards of those accused in the FIR indicated their association with CPI(Maoist). And “reflected an on going sinister design of having committed and in the process of committing criminal offences having the potential of destabilising the society.”

Three, on the basis of this information Sections of the Unlawful Activities (Prevention)Act were added against Surendra Gadling, Rona Wilson, Shoma Sen, Mahesh Raut and “certain underground persons of Maoist organisation on May 17.” Surendra Gadling, Wilson and Sudhir Dhawale were arrested on June 6.

Five, that they were involved in selecting and encouraging cadres to go underground in struggle area, mobilising and distributing money, facilitating selection and purchase of arms, decided the rates of such arms and suggesting the routes and ways of smuggling such arms into India for its onward distribution amongst the cadres. Some of them have suggested training and laying of booby traps and directional lines. They are also found to be providing strategic inputs in furtherance of the objective of armed rebellion as per the strategic document of the banned terrorist organisation namely Communist Party of India (Maoist).

Six, the activists were not arrested for political dissent but for their involvement with a banned terrorist outfit.

Seven, the Maharashtra police stated that the house arrests of the activists—as ordered by the courts—has caused substantial damage to the investigation, and that their custody was necessary to prevent them from destroying evidence and helping other potential accused.

Eight, and hence the state police sought vacation of the August 30 order of the Supreme Court that had directed the arrested activists be retained in house arrest as “dissent is the safety valve of democracy.”

The police have said they will produce the case diary and the “incriminating” materials recovered before the court.