Now MIB Says Better Not to Use the Term ‘Dalit’ 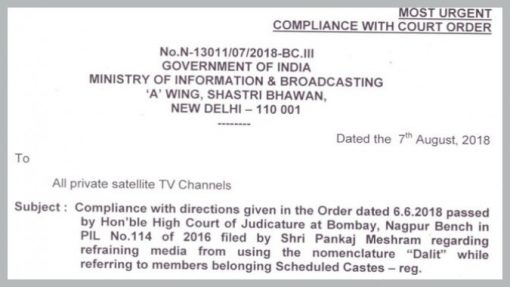 After the intensive reporting of the past week or more on the arrests of human rights activists,  it now transpires that use of the word ‘Dalit’ to describe the some of the activists among the so-called ‘urban naxals’ had been advised against early in August.

In an inexplicable move, a directive by the Ministry of Social Justice and Empowerment to all central and state government departments to refrain from using the word ‘dalit’ in official transactions, crept into an advisory issued on August 7 by the Ministry of Information and Broadcasting (MIB) to broadcast media!  And remained unnoticed till an NGO drew attention to it.

Besides bypassing the historical and socio-political meaning of the word, the move comes in the wake of dalit mobilization over various issues that has intensified following the protests over the suicide of Rohith Vemula in Hyderabad in 2016, the Una floggings in 2016 in Gujarat, the Bhim Army and the continued incarceration of its leader Chandrashekhar Azad Ravan in Uttar Pradesh and more recently, the Bhima Koregaon commemoration in Maharashtra, the protest by dalit groups and the Bharat Bandh call in April following the Supreme Court judgement on the dilution of the The Scheduled Castes and the Scheduled Tribes (Prevention of Atrocities) Act, and the recent arrests of human rights activists.

The MIB issued the advisory titled ‘Compliance with court order’ to all private satellite television channels  advising that 'the media may refrain from using the word ‘dalit’ while referring to members belonging to the Scheduled Castes! The letter refers to ‘directions by the Bombay High Court, following a petition filed by Pankaj Meshram before the Nagpur bench of the court.

The channels either did not get it or chose to ignore it.

As para no. 4 of its letter says: It is accordingly advised that media may refrain from using the nomenclature “Dalit” while referring to members belonging to Scheduled Caste in compliance of the directions of the Hon-ble Bombay High Court and the Constitutional term ‘Scheduled Caste’ in English, and its appropriate translation in other national languages should alone be used for all official transaction, matters, dealings, certificates etc, for denoting the persons belonging to the Scheduled Castes notified in the Presidential Orders issued under Article 341 of the Constitution of India.

This advisory seems to have been ignored so far. And is addressed only to satellite TV channels, not all media.

Oddly, the Bombay High Court order, passed by Justices B P Dharmadhikari and Z A Haq, merely directed  the MIB to ‘consider the question of issuing such directions to the media and to take suitable decision within the next six weeks’. But clearly, the MIB decided to send the letter to the television channels as a ‘compliance’ with the court’s order!

According to reports, a directive from the Ministry of Social Justice and Empowerment dated March 15, 2018, quotes from a 1982 circular from the Ministry of Home Affairs and an order passed by the Gwalior bench of the Madhya Pradesh High Court of January 15, 2018, that the ‘Central government/state government and its functionaries would refrain from using the nomenclature 'Dalit' for the members belonging to Scheduled Castes and Scheduled Tribes as the same does not find mention in the Constitution of India or any statute.’

The order came with regard to a writ petition filed by a Gwalior-based social worker, Mohanlal Mahor, and is the precursor to the Bombay High Court order as well as the MIB letter to the media. In 2016, Meshram, who described himself as a social worker based in Nagpur and secretary of Vidarbha Pradesh, Maharashtra, filed a petition before the Nagpur bench of the Bombay High Court to seek the removal of the word ‘dalit’ from ‘all government records, circulars, notifications, and schemes’ and demanded that social and print media be restrained from using the word. He contended that the word ‘dalit’ was ‘unconstitutional, discriminatory, offending, casteist and highly objectionable’.  He said the word must be replaced with Scheduled Caste and Neo-Bouddhas.

"Dalits are not going to go away if you don’t use the word!"

It is also perplexing how a directive, originally meant for official transactions and the issuance of certificates and documents, is translated into an advisory to the media. Surely there is a clear distinction between official communication and the coverage of issues relating to dalits? How did the MIB decide to conflate the two? And, even if it did, should media houses comply with such a clearly erroneous reading?

The fact is, there is a fairly long history to the terminology to describe members of the Scheduled Castes and Tribes in official communication as well as in the movements against caste discrimination. While social reformer Mahatma Jotiba Phule is credited to the use of the word ‘dalit’, the differences between Ambedkar and Gandhi over the latter’s preferred term ‘harijan’ are well documented.

Today, the word ‘dalit’, which literally meant ‘broken’ ‘scattered’ or ‘downtrodden’, has acquired a more emphatic meaning of resistance to untouchability and discrimination. The Dalit Panther movement of 1972 in Maharashtra consciously used the word ‘dalit’ to denote the fight against casteism as well as the solidarity of members of the Scheduled Castes, Scheduled Tribes, the working class, the landless and women.

Dr J V Pawar, a co-founder of the Dalit Panthers, is clear that it is a word that must be claimed, not just for all members of the SC/ST but for all oppressed and neglected. “I understand it is not found in ‘official’ documents or the Constitution but it is a big word, it is a huge circle. The SC/STs may occupy just a small part of this circle and I don’t understand this kind of restraint on the media. Dalits are not going to go away if you don’t use the word!,” he said.

While some believe the term dalit is not in consonance with the Ambedkarite movement, V T Rajshekar, editor of Dalit Voice, wrote that the word denoted an awareness of their (untouchables) identity and was a big step forward in the Dalit liberation struggle. He advocated a change of name for SC/ST employees unions to a Dalit Employees Association.

While the struggle to claim and assert an identity as ‘dalits’ is important, the invisiblisation of dalits and their issues by mainstream media is a serious reality. Dalit activists and thinkers have criticized the manner in which caste is pushed under the carpet and thus ‘invisibilised’ by the media. Academic work on caste – which is varied, rich and voluminous – is rarely discussed in the Indian media. As Dr Anand Teltumbde pointed out in his book on Khairlanji, media coverage fails every time to pay attention to the underlying causes of the violence or the continuing divisions in society.

At least 24 percent of India’s population are dalits and adivasis. Yet, their representation, even within the newsroom, is fractured and scattered. Rendered visible only in the context of violence or discussions on reservations, they are stereotyped and marginalised. In a The Hoot special report, Ajaz Ashraf wrote about the discrimination and marginalization of dalits in news media, discussing how dalits in the news room face discrimination and ultimately prefer to opt out of journalism!

While the attempt to redress it has been negligible, dalit groups have organized to build up an impressive presence in online media. Dalit Camera, a youtube channel, began in 2011 to ‘document perspectives on/voices of Dalits, Adivasis, Bahujans and Minorities (DABM).’ Roundtable India provides both news as well as opinions and debates as a vibrant platform for dalit students and writers. Last year, Dr Ambedkar’s newspaper ‘Prabhudda Bharat’, was revived as a print publication and now has an online presence in English and Marathi.

First published in The Hoot.
Geeta Seshu is consulting editor of The Hoot.
<