Statement on arrest of Sudha Bharadwaj, Gautam Navlakha, Varavara Rao, and other activists and intellectuals 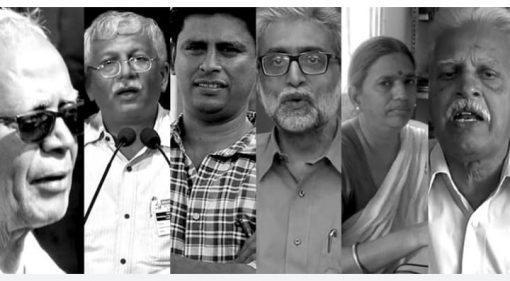 The Human Rights Forum (HRF) unequivocally condemns the arrests of social activists and leftist intellectuals including Sudha Bharadwaj, Gautam Navlakha, Varavara Rao,and Arun Ferreria  by the Pune police today. The arrests are part of a clear design to lock down on democratic dissent, undermine free speech and create a climate of fear. This is quite alarming.

These arrests, as well as the raids on the homes of a total of nine persons in Delhi, Ranchi, Bombay and Hyderabad, are plainly intended to persecute dissenters and those critiquing rights violations by governments. They are based on utterly vague and numerous flimsy and sweeping accusations. According to information available, the highly undemocratic legislation – the Unlawful Activities (Prevention) Act, 1967 is being invoked against those arrested. The UAPA is a draconian statute that is in open contempt of fundamental political freedoms and should not have any place in a civilised society. It affords free rein to the police to target and harass virtually anyone they wish to. It allows presumption of guilt, and alleged ‘intention’ to commit crimes to become the basis of arrests, incarceration, and prolonged denial of bail.

These raids and arrests are part of a concerted onslaught by the State to clamp down on politics that is inconvenient to the ruling dispensation. Slapping the label Maoist has become the routine option for the State to crack down on dissent. The ‘discovery’ of incriminating Maoist literature/letters is of a piece with this dubious strategy.

The real intent is to criminalise the democratic activity of these activists, harass them and ensure their extended incarceration. We demand the immediate dropping of the spurious charges against all those arrested and their unconditional release.