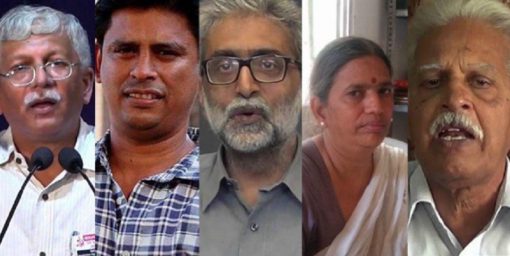 We the undersigned are utterly shocked and appalled by the simultaneous arrests of several prominent civil rights activists in different parts of the country, and the raids on their houses and those of many others. The exact nature of the alleged unlawful activities of those arrested has not been made clear though they are booked under the draconian Unlawful Activities (Prevention) Act; in many instances, even the families are unaware of the charges on which they have been arrested; where some charges have been reported, they appear utterly weird and outlandish; and the documents occasionally mentioned as evidence against them are of highly questionable authenticity. Besides, all those arrested can by no stretch of imagination be said to belong to any one particular group; in fact, the only thing that is common to them is that they have all been in the forefront of the struggle to defend the democratic rights of various oppressed and marginalised sections of society.

The conclusion is inescapable that what is being conducted is a witch-hunt against those who dare to take up the cause of the downtrodden and who dare to criticise the government for trampling upon their rights. While the BJP government in power in the country had until now been implicitly supportive of lynch-mobs targeting minorities and dissident intellectuals, large-scale arrests of critics of the government had been avoided. Even that restraint, it seems, is now being abandoned. The threat that this poses to our democracy is palpable and serious. We condemn these arrests in the strongest and most unequivocal terms, and demand that the arrested civil rights activists be released forthwith.