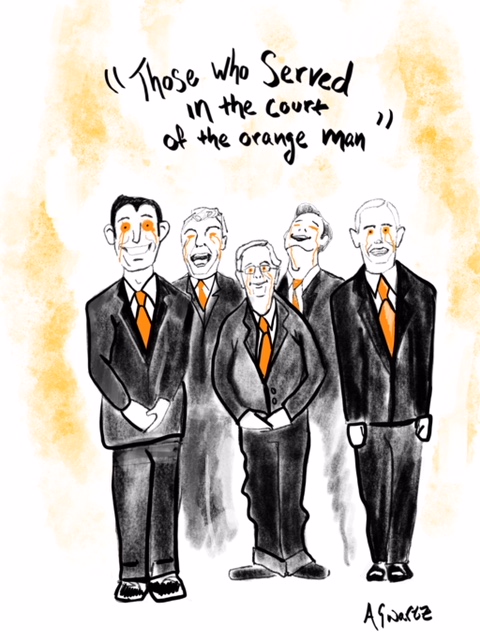 Historian Vijay Prashad writes in the introduction to Strongmen, "The monsters have returned. They are led by strong men — by Trump, by Modi, by  Erdoğan, by Duterte, and by others. But these are not really strong men. These are men who pretend to be strong, who hide behind ugly rhetoric that befuddles the masses, but who are nothing other than cowardly when it comes to social reality. Rather than confront the difficult problems that face us — problems of unemployment and starvation, humiliation and inequality — they take refuge in an easy rhetoric of hate."

Published by LeftWord, Strongmen is a collection of essays by four sparkling writers about four such monsters.
Souradeep Roy of the Indian Cultural Forum spoke with one of the four writers, Eve Ensler, the Tony Award winning playwright, activist, and author of the theatrical Obie Award winning phenomenon, The Vagina Monologues (published in 48 languages and performed in over 140 countries) about her fable on Trump in Strongmen, the need for global solidarity, and more.

Souradeep Roy: This is the first time that you have been published by an Indian publisher— I don't mean there aren't Indian imprints of your books— but that your essay in Strongmen has come to be published here in India first. You also share the book with other countries — from India, Turkey and Philippines— which have seen the rise of "Strongmen". How important is it for you to see the rise of strongmen across nations, and the resistance to these strongmen across nations, as a form of global solidarity?

Eve Ensler: These authoritarian leaders are rising for similar reasons across the world and we need to unite accordingly. These reasons include the failure of neo-liberal global capitalism to provide a secure and stable life for people, a backlash against early advances in rights for historically suppressed groups and scapegoating minority groups for the crisis.

One of the things that excited me the most about this collection of essays on strongmen was being able to see this trend of the rise of right wing authoritarian and fundamentalists across many countries. I think it is critical that we understand this to be a global phenomenon, to be able to see the patterns and policies that are spreading rapidly, so we understand we are not alone and can join in solidarity in rising up against these conditions.

SR: Why did you choose the form of the fable for your essay on Trump?

EE: These authoritarians are speaking to us at a pre-rational child-like primal level and it’s working. Our answer needs to address that deeper level of consciousness. Fables do that. For example, Trump is speaking to the deep loneliness and alienation of Americans. One of the things the fable I’ve written is saying, is that people are right to be lonely and we need to heal that in order to rid ourselves of Trump. 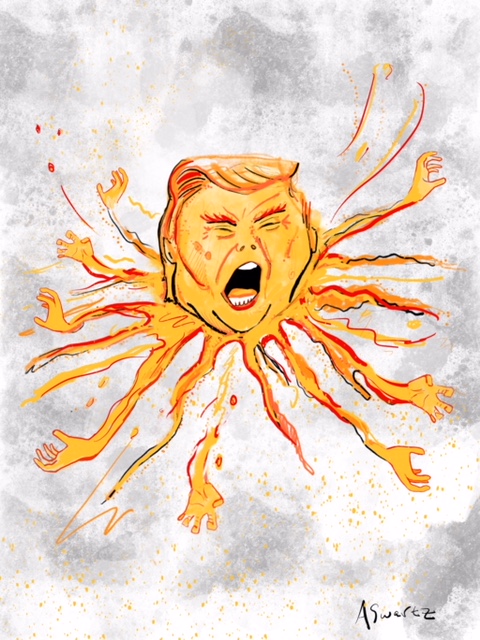 SR: While reading your essay I realised that there are certain moments where you have taken recourse to dramatic forms which are traditionally used to speak truth to power — clowning, for instance. But here you say that Trump is the clown, because as you write, "Clowns can get away from anything". You also compare him to John Wayne Gacy. Do you think that this infantilisation of Trump, even in that section of the media which criticises him, takes the public eye away from actual policy decisions?

EE: It is true that the Republicans are presenting us with the grotesque visage of Trump in order to get away with horrendous policy decisions like cutting nutritional support for poor children.

I think many of us are offering policy critiques. However, I don’t think Trump won solely because of policies. The circus is what bought him to power— the reality TV show values. We need to also critique him at that level.

It’s not either or. I think the Predator in Chief is a bizarre phenomenon. Something we have never seen in a lifetime. Which part of him do you focus on? His utter ignorance of law, policies, international relations? The fact that he has read almost nothing, can’t spell, has no ability to pay attention, can only communicate in tweets? His rampant racism, hatred of immigrants and horrifying misogyny? His pathetic insecure ego which needs constant reinforcement? His utter immorality, selfishness and corruption on every level? His love of dictators and strongmen? His utter contempt for those who were once allies and friends? His daily insults and betrayals and lies? We have a psychopathic man who has the emotional life of an eight year old running the country. Hard to know where to focus, what to say that can match the depth of the depravity and destruction…a collective wail maybe? 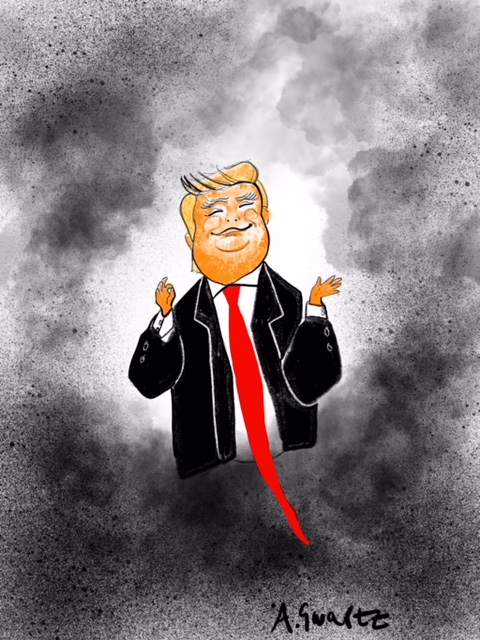 SR: When you say, "The privileged were simply unable to give up their daily comforts in order to fight the virus when it began to infect and destroy the lives of the less fortunate", you are bringing in a class angle. Later, you say, "This delusion later proved to be fatal." Then there is the "liberalatte"— the liberals etc. Is class an undercurrent throughout the essay?

EE: In his book Defying Hitler, Sebastain Haffner talks about the conditions that allowed Hitler to thrive. One was that people just didn’t and wouldn’t believe that Hitler could be serious, they couldn’t believe it was real or that anyone would follow him. The second condition was the refusal of the bourgeoisie to give up their privileges and fight to get rid of him. I have been shocked to see how easily The Predator in Chief has been able to take over so many aspects of the government, how easily he has pushed back climate protections, education, women’s rights, civil rights, disabled people’s rights, health care, and immigration rights. How vicious and openly racist, sexist and disgusting he has been. How clearly corrupt, using the government for his own economic interests. We have a president elected illegally, attempting to destroy every aspect of the remaining democracy.

The new normal is staggering and I am surprised every day that millions of us are not in the streets, refusing to leave until he is gone. I also know that this would require giving up comforts and security. Class is a theme in the fable because class is the theme of Trump’s presidency. He has just handed a massive tax cut to the richest people in the country at the expense of the poorest in the country.

SR: It is interesting that One Billion Rising uses the word "revolution". Why do you think it is important to call for a "revolution", given that you are situated in the US, where the word means something very different than what it means for people like us in the Global South?

EE: The agenda for One Billion Rising is set by our global coordinators, many of whom are from the global south. They chose this theme for interesting reasons.

I think what we have seen over the last years in OBR is that although revolution may mean different things in different parts of the world, there is a profound longing on the part of women and men everywhere to transform the current racist neo-liberal patriarchy.

I think many people are hungering for a radical change-ousting fascist regimes, fighting for a new paradigm where the earth and women and people of colour, poor people, immigrants and refugees, working people, minorities, disabled people and the LGBTQIA matter. One Billion Rising is committed to this complete change that a Revolution can and will bring.

SR: Finally, a question about The Vagina Monologues. The play has been performed so many times. Did you think it will become such a big movement when you first wrote it? There have been certain recent criticisms of the play (that it doesn't speak for transpeople, that it doesn't see sex as liberator, etc.) Do you think a part of the problem is that some presume that one play can take up everything? Also, the play has been performed in many other languages, besides English. Which performances of the play, in sites which do not speak English as the first language, have been the most inspiring? 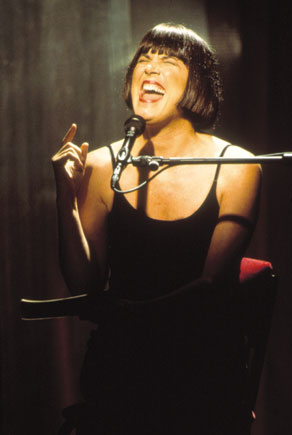 EE: The first time I ever performed The Vagina Monologues, I was sure somebody would shoot me. It might be hard to believe, but at that time, twenty years ago, no one said the word “vagina”. Not in schools. Not on TV. Not even at the gynaecologist. When mothers bathed their daughters, they referred to their vaginas as “pookis” or “poochis” or “down there”. So when I stood on-stage in a tiny theater in downtown Manhattan to deliver the monologues I had written about vaginas—after interviewing more than two hundred women—it felt as if I were pushing through an invisible barrier and breaching a very deep taboo.

I’ve always been a passionate supporter of Transgendered people’s rights and for that reason they have been included in The Vagina Monologues.

And yes, this play is 20 years old. Much has changed. One play cannot and should not be responsible for taking on everything. I am moved and proud to see how many groups and people have been inspired to write their own monologues, Yoni Bat Monologues, Menopause Monologues, last time I counted, there were 75 of these plays.

The Hindi production in Delhi was very moving. The Portugese production in Brazil was wild and breathtaking. The Mexican and French productions have been running for years and they are incredibly powerful.

Also read an excerpt from the chapter "Modi's Political Grammar" by Danish Husain, from Strongmen.