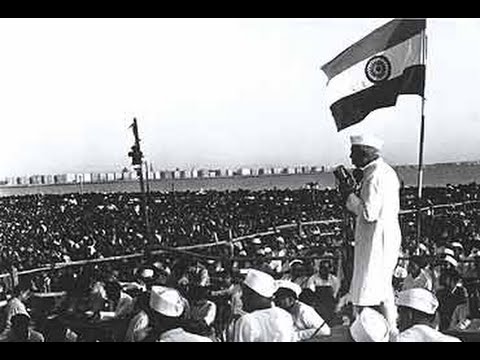 August 15, 1947, was a historical day in the eventful history of India. India got independence after a long and heroic struggle against the British colonial masters. India’s independence was also a milestone in the ongoing anti-imperialist liberation struggles world-over.

In India all those who dreamt of an independent India and survived to see it happen were jubilant and despite gloom due to communal violence celebrated this amazing day with great passion. However, there was one organisation, RSS and its foot-soldiers who were not celebrating the birth of a democratic-secular India but mourning its birth.

Denigration of the Tricolour on the eve of Independence

RSS was ruthless in condemning the national Flag, the Tricolour which symbolised the united heroic freedom struggle for an inclusive India. On the eve of independence the RSS mouth-piece, Organiser, in its issue dated August 14, 1947, rejected this choice in the following harsh words:

“The people who have come to power by the kick of fate may give may give in our hands the tricolor but it will never be respected and owned by Hindus. The word three is in itself an evil, and a flag having three colours will certainly produce a very bad psychological effect and is injurious to a country.”­

RSS Rejected Democratic-Secular India on the eve of Independence

The RSS organ Organiser in the same issue (14 August, 1947) rejected the whole concept of a composite nation in an editorial titled ‘Whither’:

“Let us no longer allow ourselves to be influenced by false notions of nationhood. Much of the mental confusion and the present and future troubles can be removed by the ready recognition of the simple fact that in Hindusthan only the Hindus form the nation and the national structure must be built on that safe and solid foundation, the nation itself must be built up of Hindus, on Hindu traditions, culture, ideas, and aspirations…”

The Constituent Assembly of India (CA) on November 26, 1949, adopted a model democratic-secular Constitution for India which was lauded nationally and internationally.
However, there was one significant exception. The Hindutva camp led by RSS which had consciously denigrated the anti-British freedom struggle mourned this historic achievement too. Three days after the CA passed Constitution the RSS’ English organ, Organiser on November 30, 1949, in an editorial, rejected it and demanded the archaic, anti-egalitarian’ Manusmriti, as the constitution. It read:

“But in our Constitution, there is no mention of the unique constitutional development in ancient Bharat. Manu’s Laws were written long before Lycurgus of Sparta or Solon of Persia. To this day, his laws as enunciated in the Manusmriti excite the admiration of the world and the world and elicit spontaneous obedience and conformity. But tour constitutional pundits that means nothing”.

It is to be noted that Manusmriti decrees a sub-human status to Sudras and women.

The tragedy of the present democratic-secular polity of India is that an organisation which openly declared its hatred for the former is ruling India thus presenting the gravest threat to India from within.