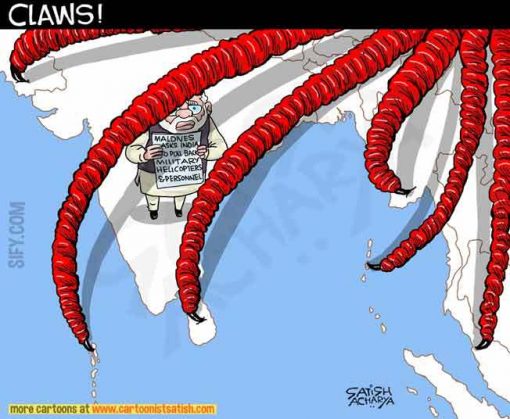 When Mail Today (a daily tabloid) censored Satish Acharya’s cartoon, it arrayed Pen is mightier than sword, but not mightier than China. Satish’s cartoon on China’s talons viscously spreading across South Asia was not seen as a fearless work of art but rather a non-conformist stunt. Mail Today would not dare print Satish Acharya’s courageous piece but rather go with a photo. The editor rejected the cartoon saying that it was, “Very defeatist and the China problem is being overplayed.”

For Satish, drawing a cartoon is a medium to exercise his right to freedom of expression. It is a space to challenge his creative frontiers. He uses cartoons to voice out his thoughts and opinions fundamental to his sanity. This is not the first time he has experienced censorship first hand. He has been battling to uphold the sanctity of the cartoon column for a long time now.  His cartoon on cow was rejected by the editors on simple ground that they were not happy. The cartoon on lynching were rejected on the fear of India Today group portraying itself as communal. He was told to replace Prime Minister Modi’s character with any general BJP figure. Others were rejected because it didn’t make sense to the editors and so on.

The irony is that many of the rejected cartoons were then used by other clients. Many of them were re-tweeted, shared and some of them went viral. Although many of the cartoons are critical of the government, yet even the personal website of Amit Shah carries his cartoons featuring him.

The suffocating barriers imposed on his creativity by the Mail Today editors made him take the decision to leave. However, he feels that this controversy is not about quitting. It is about the editors respecting the independent expression of the artist and enable them to work without fear or favour.

#IStandWithNituparna: The Cartoon That Elicited a Death Threat