old post
The Story Behind the 1970 Rolling Stone Story of Jean Genet and the Black Panthers
July 17, 2018

This is a story by Langdon Winner, who is known for his articles on technology, science, and society. He is the author of Autonomous Technology, a study of the idea of "technology-out-of-control" in modern social thought, The Whale and The Reactor: A Search for Limits in an Age of High Technology, and editor of Democracy in a Technological Society. Many years ago he did a stint as a reporter and rock music critic for the Rolling Stone magazine. Here, he recounts the time when he was in Berkeley and Jean Genet addressed a press conference in support of the Black Panthers. We also republish the story that came out in Rolling Stone on April 16, 1970. 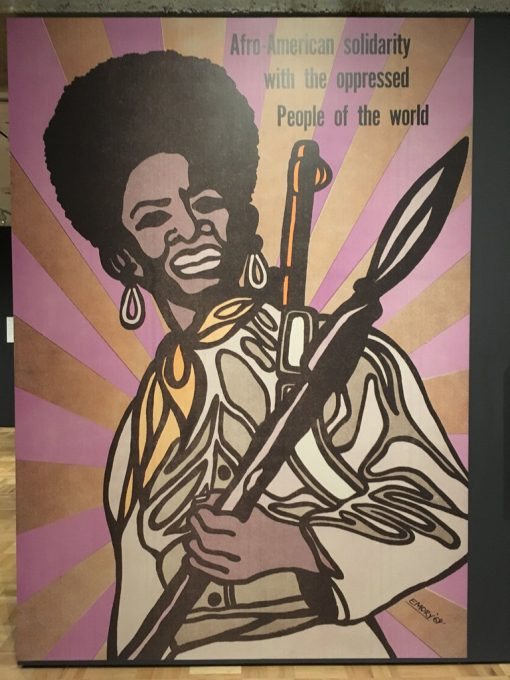 The release of and acclaim for the Black Panther movie along with recent interest in black radical movements brought back vivid memories from my late 1960s college days in Berkeley when the newly organised Black Panther Party was a strong presence in nearby Oakland. In particular, I was reminded of the following rather odd encounter.

During one of those sunny spring mornings in a room I’d rented high in the Berkeley hills, I received an unexpected phone call from Greil Marcus, long time friend and Rolling Stone magazine editor who lived just around the corner.

“Do you have a tape recorder?” he asked.

“Yes, a battery powered cassette portable,” I replied. “What’s up?”

“Well, in about an hour there’s going to be a press conference at the Black Panther Party headquarters in south Berkeley.  Jean Genet is traveling around country to support the Panthers in their ongoing troubles with the police and he wants to speak to local reporters. I think we should cover this for Rolling Stone.”

“Fine.  Sounds interesting.”  I hurriedly packed my bag, jumped in I my VW Beetle and drove to the site.

In the driveway of an old Victorian house were several rows of folding chairs where small group of visitors had begun to gather.  I grabbed a seat in the front row, checked to make sure my batteries and microphone were working, and got ready to record. A few minutes later the front door opened and out came several Panthers wearing their signature black leather jackets and berets. With them was the short, bald Jean Genet, easily recognisable from photos I’d seen of him over the years.

At the time Genet was one of France’s leading intellectuals, renowned for plays and novels that depicted criminality, homosexuality, and transgressions of social conventions largely based upon his own extraordinary life experiences. His plays included some of the most challenging experimental works of the period including “The Maids,” “The Balcony,” and, significantly, “The Blacks,” a radical exploration of black identities and white malice that had had a long run and a phenomenal impact in New York theater during the early 1960s. Some years earlier Jean-Paul Sartre, philosopher and Left Bank luminary, had published a massive tome reflecting upon Genet’s life, work and historical significance, Saint Genet: Actor and Martyr.

The news conference began with a brief statement by David Hilliard, leader of the Panthers Oakland branch. He explained that Genet was visiting the United States to protest the repression, violence and imprisonment aimed at the Black Panthers, including co-founders Bobby Seale and Huey P. Newton who were both serving prison terms at the moment. Hilliard expressed his thanks to Genet for his work in rallying public support for the Panthers in their quest for social justice.

As Hilliard finished, Genet stepped forward, accompanied by a French/English translator.  The very first words out of his mouth were, “Is there anyone here from the Rolling Stone magazine?”

Gulp!  I certainly wasn’t ready for that.  But I raised my hand, making sure that the tape recorder was rolling.  Genet walked over, looked me in right the eye and began to speak in a calm but forceful manner.

Although I did not include it in the article, my exchange with Genet included an admittedly tepid but truthful defense of my own role and that of some others working at the magazine.

I argued, “There is a group among the writers and editors who are trying to include more political coverage in Rolling Stone, including stories about the Vietnam War and the Black Panthers.  But given the editorial constraints of what’s basically a rock and roll publication, it’s an uphill battle.”

Genet’s response was terse and to the point.  “Those are only words.  You must do more!”

Below is the complete news story I wrote for Rolling Stone, published on April 16, 1970. (The impish headline was inserted by the managing editor, John Burks.)

BERKELEY – “Your efforts to make your readers political,” said Jean Genet, the radical French playwright, poet and existential saint, “won’t succeed if whites do not want to understand that you must go beyond racism and reach a solidarity with the blacks.” He was speaking at the Black Panther headquarters to an audience of primarily composed of representatives from the underground press. Fully aware of whom he was talking to, he repeatedly denounced the young reporters for their “racist way of being".

Genet was visiting the Bay Area as part of a speaking tour to support the Black Panther Party and to protest the imprisonment of Panther leader Bobby Seale. He urged all young whites to recognise the revolutionary leadership of the blacks and to give their undivided support to the Panthers.  He contended that there was no genuine movement of young whites in America behind the Panthers. “The more the whites notice that the blacks are becoming politically intelligent in a revolutionary way, the more they are afraid of them.”

The poet said that someone had translated for him a story on the Chicago Seven trial from ROLLING STONE.  He was obviously referring to the article by Gene Marine in the April 2nd issue.  Speaking directly to this ROLLING STONE reporter, Genet exclaimed, “You bring out the most emotional attitudes of whites concerning the Chicago trial and Bobby Seale. But after what I read and what was translated for me, there was no political or revolutionary argument used.”  He criticised ROLLING STONE for continuing the “paternalistic attitudes towards blacks which is characteristic of all liberals.”

“I am asking you to think politically more and more so that you can make the readers of ROLLING STONE political,” said Genet. This could not be done, he emphasised, by putting stories about Black Panthers between stories about drugs and sex.

Genet’s wrath was not limited to ROLLING STONE alone, however.  He scoffed at the suggestion that other members of the press had achieved revolutionary consciousness or freedom from racism.  “All whites in the United States continue to be deeply racist.”  Genet predicted a civil war in America of blacks against whites.  “The means your police is so great that I’m almost convinced that even you, the representatives of the underground papers, will put yourselves on the side of the police.”

The host of the press conference, Black Panther Party President Dave Hilliard, also expressed his dismay with the current policies of the hip/radical newspapers. “I would like to see the underground press use their intelligence to condemn the imperialism and fascism that’s being meted out against the Black Panther Party.  I would like for them to turn their newspapers into revolutionary organs and not satirical sex sheets.”

Genet refused to answer a question as to whether or not he himself was racist. He did point out, nevertheless, that the only white revolutionary movement in the world which was not racist was the Marxist-Leninist movement in France. Mr. Genet lives in France.

The poet closed the conference with an impassioned plea to the members of the press: “If your work with the white population doesn’t succeed, then the guns will talk. That’s for sure!”