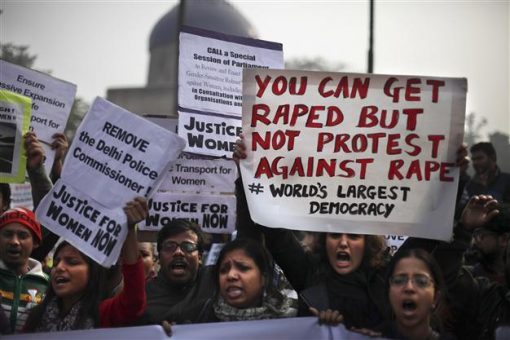 According to a Thomas Reuters Foundation experts’ survey poll published on June 26,2018 India is the world’s most dangerous country for women due to high risk of sexual violence and forced slave labour.

War-torn Afghanistan and Syria ranked second and third in the Thomson Reuters Foundation survey of about 550 experts on women's issues, followed by Somalia and Saudi Arabia.

The survey asked respondents which five of the 193 United Nations member states they thought were most dangerous for women and which country was worst in terms of healthcare, economic resources, cultural or traditional practices, sexual violence and harassment, non-sexual violence and human trafficking. These were the six parameters on which the survey was conducted.

“Respondents also ranked India the most dangerous country for women in terms of human trafficking, including sex slavery and domestic servitude, and for customary practices such as forced marriage, stoning, and female infanticide.”, the findings said.

The survey has sparked a whole new debate and controversy about the situation of women in the country given the rise of cases of grievous sexual violence and harassment, mental and physical tortures, hate crimes, minor rapes in the very recent years. The ruling government has come under attack on the social media in particular for its inability to improve and ensure women’s safety and protection and further escalating it down and making it worse.

The government has rejected the opinion poll saying that Reuters has used a flawed methodology to arrive at this claim. The Ministry of Women and Child Development has come out with a detailed statement on June 27, 2018 questioning the reliability of the survey, stating that it is not based on data but on perception of unknown persons. The Ministry had come out with detailed statistics and data to show that the reports findings are not a reflection of reality.

The Citizen spoke to Kamla Bhasin, a prominent Indian developmental feminist, and social scientist with a work focus on gender, education, human development and the media.

Kamla Bhasin said, “ I think violence against women has always been there and see wherever there is patriarchy and male domination there is violence. For the last 60-70 years, the sex ratio has been going down in this country. Even after independence, the sex ratio is amongst the lowest. Now everybody is very upset about the Reuters poll but even if you look at government data about rape there are 90 rape cases per day and in every 20 minutes there is a rape case.

There are so many surveys that have been done on college girls in Delhi and other cities where a big majority says they have faced sexual harassment and violence in bus and other places. We all know how we treat the widows in this country, there is menstrual taboo, ‘purdah’ and ‘ghunghat’ practices still prevalent.

There is rise of violence especially against Dalit women and we have known all this all the time. In our country we have so many kinds of violence like we have traditional violence such as ‘kanyadhan’, not giving women property rights. If we put all these data together we will get a high rate of violence. So I’m really surprised that all these people are trying to say how was this survey done and what was the methodology. I don’t care if India is first, second or third but all I care is there is a lot of violence and now the world is talking about it.”

Bhasin further added, “Every time we talk of the death penalty and laws after the violence is done. My question is not that but my question is why is so much violence taking place. What is wrong with our culture? Most of the violence is perpetuated by men and young boys. My question is what is happening to our men and I know no human is born violent but they become so because of the way we bring them up. I really believe the basic changes have to take place within us.

Most of the cultural and religious practices are so unequal to women and are against the Constitution. We have brilliant laws but still, the implementation is missing. With so much of violence and women issues in place, I am not surprised by the survey result and I’m glad that the world is talking about it and we need to do more.”

The Citizen also spoke to Mariam Dhawale, General Secretary of All India Democratic Women’s Association(AIDWA). Mariam Dhawale said,“ The government has dismissed the survey but this survey is about certain things that the women organizations have been saying for a long time. In the last few years, the incidents of violence specifically in our country have spiraled and risen up like anything.

The current govt is all about sloganeering and coming out with campaigns like ‘Beti padhao, Beti bachao’ but AIDWA feels it should be ‘BJP se Beti bachao.’ The people and the accused, most of them are going out freely and there is an entire bias against the victims. Small minor children are being raped, for example the Kathau Rape case. The ruling government to escape the route easily have brought up ordinance giving death penalty but the issue in this is much different.

AIDWA feels that the most primary thing is to see that the accused do not go out free and that they do not get bail or just go out and make their lives but this is what's happening.Almost in every case, there is a dereliction of duty because the police officers do not act immediately, sometimes the medical checkups are not done in time. The authority itself is very rude and the victims face further humiliation.”

The present government in a very deliberate way is trying to silence progressive, liberal and reformist ideas, and women voices. They have a very right-wing ideology which is definitely anti-women. They follow Manusrimti, an unequal and unjust text which considers women as secondary citizens.

AIDWA as an all India organization has been fighting all these issues for so many years, for example, we stood up for the victims in this year's Kerala honor killing and hate crime case, in JNU Atul Johri’s harassment case, the Jharkhand minor rape case. Most of the BJP ministers have been seen perpetrating or supporting the accused in most of the recent cases. Even University campuses and workplaces are not safe for women where many have to face workplace harassments and sexual violence.

The Dalit and minority women are facing inequality at the hands of the upper castes which goes unheard. The patriarchal norms in the country have been further strengthened and there is increasing communalism in the country. The people who are in power are perpetuating a particular ideology which doesn't speak for equal women rights. It is the worst situation for women everywhere, be it the domestic sphere or working sphere, for eg IPC section 498A for domestic cruelty laws is being diluted which is very dangerous for the women.

The BJP talked about 33% reservation but now when they are in power why aren’t they passing or pushing for the bill. Even in the recent Triple Talaq Bill, the govternment said anyone who does this kind of talaq will be immediately jailed but then who will speak for the divorced woman and her rights and maintenance. In a democratic country like India just like in other war-prone and autocratic countries, women are still very unsafe and insecure and there is a huge rise of sexual violence.”

Responding to the poll results, Japleen Pasricha, Founder-Director of FII, an online feminist media platform told The Citizen, “Violence against women is a structural problem which needs to be tackled at its roots. Only when we as a society stop seeing women as 'property' to be given away and placing a family's honor in a woman's vagina can we achieve gender equality in the time to come. Women must be seen as individuals having their own agency, autonomy, and opinions.”