old post
Appeal for Solidarity with Bhima-Koregaon Five and All Voices of Democracy
July 2, 2018

Close to 300 civil society members have come together and released a statement condemning the arrest of the five people in connection with the Bhima-Koregaon case.

Every year on January 1, dalits gather at the Bhima-Koregaon War Memorial to commemorate the historic Battle of Bhima-Koregaon which saw the British East India Company soldiers, comprising primarily of Mahars (a dalit community), defeat the Peshwa army. The battle is seen as a victory over the oppressive upper-caste Peshwas who discriminated heavily against the Mahars.The documentary Battle for Bhima-Koregaon: An Unending Journey, is the only known film made on the event, according to its filmmaker Somnath Waghmare. Read an interview with him here where he talks about the Bhima-Koregaon celebrations and the struggle against brahminism.

This year, on January 1, the celebrations at Bhima-Koregaon turned violent when it was interrupted by a group carrying saffron flags who attacked the attendees while they were on their way back. During the initial investigations, the two prime accused were Milind Ekbote and Sambhaji Bhide, leaders of hindu right wing organisations Hindu Ekta Aghadi and Shivraj Pratishthan, respectively. EKbote, who was arrested, was later granted bail.

On June 6, the Delhi, Mumbai, and Nagpur Police, in a “joint operation”, arrested five people. These five people are Mahesh Raut, a former fellow of the Prime Minister’s Rural Development Fellowship and a displacement-issues activist; Shoma Sen, a university professor who was the head of the English Literature department at Nagur University;  Sudhir Dhawale, a dalit-rights activist based out of Mumbai; Surendra Gadling, a lawyer and active member of the Committee for Protection of Democratic Rights who was also handling G N Saibaba’s case before his arrest; and Rona Wilson, a social-activist based out of Delhi and core-committee member of the Committee for the Release of Political Prisoners. One of the reasons cited was their “involvement” in the violence at Bhima-Koregaon this year.

Read the statement by the Citizens' Solidary with Voices of Democracy below. 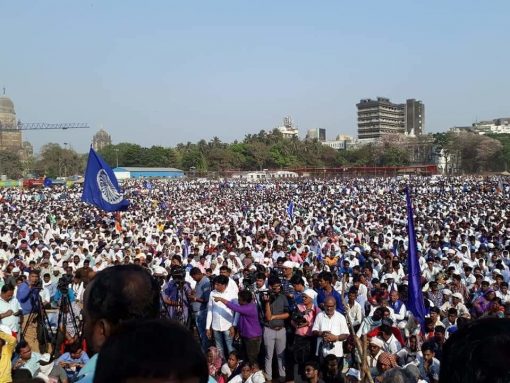 Dalits gather in Mumbai to protest against the violence in Bhima-Koregaon | Image Courtesy: Newsclick

We condemn the arrest of five human rights activists, professors and lawyers in connection with the Bhima-Koregaon clashes early this year. The alarming arrest of Advocate and General Secretary of Indian Association of Peoples’ Lawyers (IAPL) Surendra Gadling, Committee for the Release of Political Prisoners (CRPP) Public Relations Secretary Rona Wilson, Head of English Department Professor Shoma Sen of Nagpur University and member of Women against Sexual Violence and State Repression (WSS), cultural activist and founder of Republican Panthers Jaatiya Antachi Chalwal Sudhir Dhawale and anti-displacement activist and Prime Ministers Rural Development Fellow (PMRDF) Mahesh Raut is a clear manifestation of state terror to crush the voices of dissent in this country. The intemperate use of sections of the IPC and Unlawful Activities (Prevention) Act (UAPA) on all five reveals legal over-reach and exposes the desperation to foist extraordinary and excessive charges on all five to ensure they remain in the clutches of the Fadnavis-Maharashtra government. All the arrested have consistently worked for the assertion of oppressed and marginalised communities against majoritarian forces, spoken out against Brahmanical patriarchy, upheld peoples’ rights to land, life and dignity, and have strived for the release of political prisoners. Today, after standing for the assertion of dalits, adivasis, Muslims, women, workers, farmers, marginalised sexualities, and oppressed communities, upholding the principles of democracy, and, consequently, being a thorn in the side of a vengeful police force, they are under the custody of impunity. Meanwhile, the perpetrators of violence during the Bhima-Koregaon clashes enjoy the protection of the state, patronage of the RSS and walk free. Now, with concerted efforts to implicate the arrested, egregious narratives of plots of assassinations is being weaved to defame and keep them in jail. These retributive actions are intended to threaten anyone who speaks out for them and drive a wedge between all struggles for peoples’ rights. In the last few years, wherever people have asserted their rights, the political establishment has clamped down on them with brutal force – be it in Saharanpur or Una, Bhima-Koregaon or Thoothkudi. The assault on the democratic fabric of this country, through the abuse of the legal and judicial process, the stage-managing of media for public trials, and deliberate efforts to build a climate of fear is blatant and pervasive. Today, more so than ever, it is crucial to reiterate unity in the face of divisive majoritarian politics that uses structural hierarchies to violently suppress different sections of people and communities. We strongly condemn the arrests of these voices of democracy, demand the immediate and unconditional release of all five human rights activists, professors and lawyers and stand united in our opposition to the onslaught of Brahmanical Hindutva fascism.


*This list is incomplete, with more names being added to it daily.