On June 21, issues and stories of Dalit women were presented at the UN level for the first time ever when Asha Kowtal, General Secretary of All India Dalit Mahila Adhikar Manch (AIDMAM) presented a report and a documentary in Geneva. 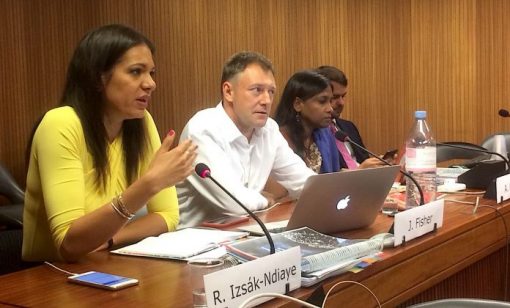 
Talking with TwoCircles.net about the seminal event, Savita Ali, National Legal Coordinator, AIDMAM, said this was the first time the stories of how Dalit women are exploited and harassed in India was brought to the world. “The world came to know about how at an average three Dalit women are raped every day and the administration pays little attention to these matters. This report is aimed only at addressing caste-induced violence and find a solidarity at an international level for this cause.”

Asha Kowtal, in a conversation with TwoCircles.net, said that every time our Prime Minister Narendra Modi travels for an official foreign trip, he talks about the ‘superpower’ that India is becoming, even though the crimes against Dalit women continue to rise. “Our organisation regularly raises these issues with the local government and the administration but there seems to be little or no response. We hope that this presentation will make the UN ask the Indian Government to look into the issue with more sincerity as India is also a signatory to the Universal Declaration of Human Rights,” she added.

The report, titled ‘Voices against Caste-violence: Stories of Dalit women in India’ shows the world how the present government of Narendra Modi is complicit in the violence unleashed against Dalit women in the country.

The report exposes how the local government and administration have covered up for crimes against Dalit women in states like Orissa, Maharashtra, Bihar, Haryana and Uttar Pradesh, and how the local Dalit women are resisting and fighting against the same.

The report shows how most Dalit women are employed as a bonded labour and often forced into sex work, along with also informing the world about how 98% of women who continue to clean dry latrines are Dalit women.

The report quotes the National Family Health Survey (NFHS) to show that by the age of 15, nearly one-third of Dalit women had faced physical violence.

During the presentation, Kowtal pointed out how, despite their human rights in deep peril, Dalit women continue to fight against the injustices. “The report is not about our pain, it is the story about how we fight against it. Ours is a fight against people who continue discrimination on the basis of caste…and this is a story of how Dalit women have risen against such people,” she said.

“While we (Dalit women) continue to suffer, my country cannot portray itself as a world power…caste-induced violence wreaks havoc with our lives because the issue is deeply rooted in our society…and this can be tackled only with a legal and progressive viewpoint,” she added.

First published in Twocircles and re-published here from Sabrang India.