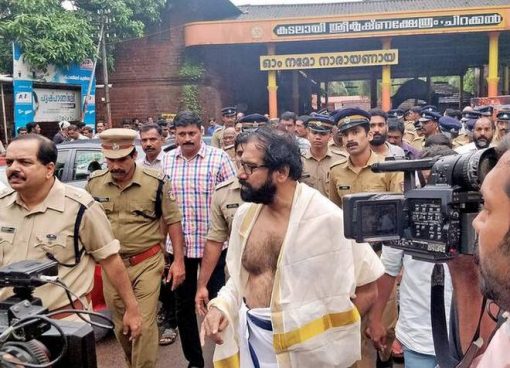 ICF: Recently, you performed the shayana pradakshinam (prostration), an atonement ritual, the Kadalayi Sree Krishna temple in, Kerala for the 8 year old girl from Kathua who was raped and murdered. According to a report in The Hindu, some right-wing groups opposed this move. What is it that led you to perform the ritual?

KP Ramanunni (KPR): Most of the things that I do in my life are a part of my writings. That is why I kept only Rs 3 for my work and donated the rest of the money to Junaid’s mother. All these are just a way of showing people the importance of secularism, and that it is possible to be secular without being an atheist. My novel, Daivathinte Pushtakam, is about communal harmony and brotherhood that existed in the lives of religious figures like Krishna, Muhammad, and others.

I performed the shyana pradikshinam for the 8 year old Kathua girl because I understand what true Hinduism is. What I did was in keeping with what I write in my book. These are values that I have espoused in my writings as well.

Right now, we are witnessing communal hatred being propagated by one religion against another for political purposes. I think it is important to assert this aspect of Hinduism because of this. Religious places are being turned into sites of heinous crimes.

It is only those who understand that religion is about living with each other in harmony who do not fall for these political tactics and communalisation. People need to open up their minds. Religion teaches you to love everyone; this is what they should follow instead of using religion to spread hatred among people and communities. For instance, Hinduism is the majority religion in this country. And it doesn’t espouse the kind of division and communalism that these right-wingers are propagating. Hinduism espouses values of peace and prosperity.

People like Sri Ramakrishna, Swami Vivekananda, Mahatma Gandhi, Sree Narayana Guru, they are the real proponents of Hinduism. The present Hindu leaders are different. People are using religion to turn people against each other. Their minds are being filled with communal hatred by the so called “guardians” of Hindu religion. The brutal rape and murder of the small girl in Kathua has become the symbol of this kind of hatred — there, the temple itself, quite literally, was turned into a site of heinous crime and brutality.

I didn’t perform this ritual just for the incident in Kathua. I want people to understand how important it has become for Hindus to strive and work for communal harmony in our time, in the political situation that the country is in now. Hinduism is not the religion that it is being made out to be. There are also some good values that it espouses. This is what I wanted to highlight through this act.

The prayachitta shayana pradakshinam — a religious act, was done to atone for all the violence that been done in Hinduism’s name. Temple’s need not become a site where we only pray for our personal needs. We can also pray for the society. Through this act, I think I have managed to remind at least some people about the communal harmony that Hinduism espouses.

ICF: The right wing group, Hindu Akiya Vedi, gave a call to stop this ritual. In fact, protests were staged outside the temple where you were performing the ritual. Is this true? Could you talk about what happened there?

KPR: Right-wing organisations like Hindu Akiya Vedi protested against this act. They claimed that I was using this as a political platform. They threatened me and declared that I wouldn’t be allowed to enter the temple. I have already explained my reasons for performing this ritual. What I did was not against Hinduism, or any religion, for that matter. It was simply a symbolic gesture meant to highlight the importance of communal harmony at a time like this. Here in Kerala, whenever there is a function in a temple — like marriage, birth of a child, or any other auspicious occasion — we invite others to participate in it. I also did the same. I simply invited Hindus who are against the violence that is being carried out in Hinduism’s name to join me.  Swami Dharma Chaithanya, who is an activist from Kerala Samsarika Sangam (KSS), and I together invited the people to come for this ceremony. The KSS also stands for such values of the religion. Their aim is to spread communal harmony among the believers of Hinduism.

Despite the threats from Hindu Akiya Vedi and other right-wing groups, I decided to go ahead with the ritual. Many Hindus, and even people from some Left organisations, gathered at the temple in large numbers to show their solidarity. There was a skirmish between those who had gathered to protest against me and those who had gathered to support me. But that did not stop me. I completed what I had pledged to do.

ICF: Do you think there is a rise in religious fundamentalism in our country?

KPR: Yes, we can see religious fundamentalism everywhere. Both Hinduism and Islam have given rise to fundamentalists. There is no difference between the two. Both the groups are propagating hatred along religious lines among their believers. It in this game of religion, it is the common people who suffer. Ultimately, what we see today are not the values that these religions stood for; the values they actually stood for have been lost.