This is the second part of a two part essay on an eyewitness account of visiting Palestine. We have changed the name of the author to protect her identity. Read the first part here.

In the old city of Jerusalem, entire families live in one room tenements. Israeli occupying forces have installed cameras around these tenements and have soldiers living on rooftops. I kept thinking how a young couple could, perhaps, not even talk intimately in these tenements, knowing there’s a camera outside their window or a soldier hovering around. And yet the Palestinian families had planted flowers in pots outside their homes, in the middle of this suffocating madness.

Via Dolorosa is a street in the old city, the street through which Christ is believed to have walked when he made his way to his crucifixion, which takes you through winding routes to the Church of the Holy Sepulchre. Right where this street begins, Israeli soldiers stand in hordes, looking at passers-by, stopping only the Palestinians, obviously. Just as we were entering, they stopped a young Palestinian man and asked him to show his ID. He pulled it out warily. Our friend, who was taking us around, couldn’t help but remark how symbolic this moment was — Via Dolorosa, the Way of Sorrows.

We saw the Al-Aqsa mosque compound from a distance, including the shining blue Dome of Rock that is clearly visible from afar. This is where the Prophet Muhammad is said to have ascended into heaven and spoken to Allah. It was in the direction of Al-Aqsa that Muslims prayed, that is, till Mecca acquired the centrality that it does now. Jerusalem, or al-Quds, has a formidable presence Islamic belief. One of the Hadiths remarks, “There is not a single inch in Al-Quds (Jerusalem) where a Prophet has not prayed or an Angel not stood.”

We decided not to enter the Al-Aqsa compound as there were different sets of restrictions for us as foreigners and for our friend as a Palestinian. The area immediately around the mosque’s compound has been demolished repeatedly by Israel. In one of the shops in the old city, our friend found an old picture of the compound and pointed out his ancestral home.

As a foreigner, I was able to go to cities such as Haifa and Acre that were ethnically cleansed 70 years ago to establish Israel. These cities are right at the coast of the magnificent Mediterranean Sea. While there are Palestinians in these cities and other parts of Israel, they live as second-class citizens with over 65 laws discriminating against them. These historic cities, especially Acre, feel almost like the very beginning of civilisation. The Palestinians living here are just about holding on as Israel tries to expel them through an array of tactics. The erasure of Palestinian history is ongoing. Palestinians in West bank cannot visit these parts without permissions, permissions which are difficult to come by. I heard the story about a man who asks all his friends visiting West Bank to bring a little bit of sand from the beach closest to their home. With all the sand his friends have brought him, he is building a mini-beach for his son, to make up for the Mediterranean that the kid cannot visit. The sea emerges in so many conversations with Palestinians, a shared, national nostalgia.

Crossing the checkpoint and being back in West Bank started to carry a peculiar sense of relief for me. The familiar, bustling roads, restaurants, the gentle sound of Arabic conversations (once I asked a friend what the long, sweet exchange she just had with a shopkeeper was. Turns out it was ‘thankyous’ and ‘welcomes’ back and forth), the hip songs playing in cars; all stood in stark contrast to the constant sense of suspicion, alienation, and self-doubt that I could feel in Israel. West Bank is swarming with Israeli occupying soldiers, settlements, checkpoints. It was most recently invaded in 2002, which implies that the people there have lived through a period where snipers would be hovering on rooftops in their localities. For three decades before Oslo Agreements it was under direct Israeli military control.Every home has stories of exile, violence, of starting from scratch, of keys and the hope to return. And yet, or perhaps that is why, it was as much home as home could be.

Closer to my return, I visited Hebron. The city stands out as it is the only one in West Bank that has an illegal settlement right in the heart of the city. Within the market of the old city, a metal grill stretches above the streets with shops on both sides. This was put together by Palestinian shopkeepers to prevent the rubbish and stones settlers throw upon them from the places they occupy above. The checkpoint piercing the old city leads us (non-Muslim) foreigners to Al-Shuhada Street, an erstwhile bustling market which, today, is a ghost street. This meant that my Palestinian companions had to take a detour to meet us at the end of the street, we could not walk together. Once on the street, I was met with the sight of settler men, including teenagers, walking around with guns slung on their shoulders as if it were a satchel; the boards on run down, empty buildings telling a completely false story to justify the settlement. A Palestinian home had just been taken over by settlers at the end of the street, which had led to even more heavy presence of Israeli soldiers. 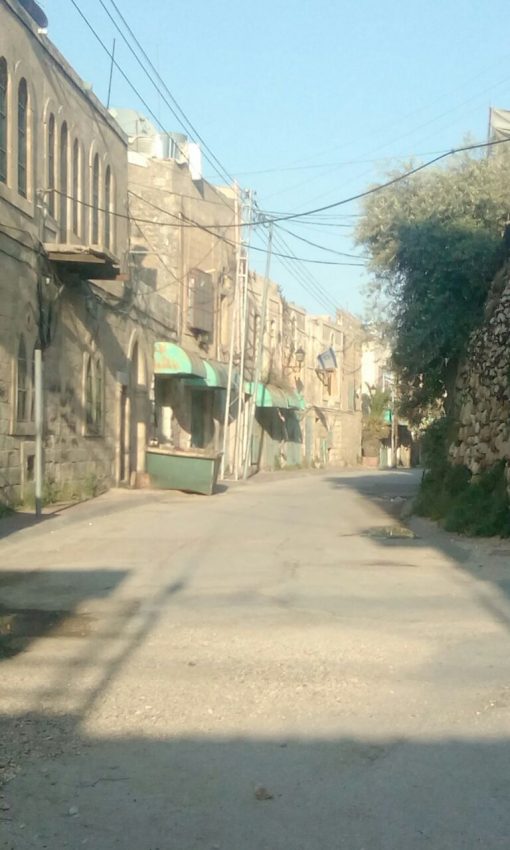 I crossed a young Palestinian man being handcuffed and dragged away by the soldiers. Around him, kids not older than ten years of age were cheering this arrest and clamouring together, presumably something ominous. This scene particularly broke me, as it reflected the complete closure of possibility, a sort of inner death. I cannot imagine those kids growing up even wanting to know the lives of the Palestinian kids living just behind the street. It seems like a natural, inevitable trajectory that these kids would go on to become the armed, expressionless soldiers at the checkpoints. Nothing could be more depressing than that.

At the end of the street, I was led to Muneer’s souvenir shop. Muneer, an old man in his 60s or 70s, has seen many foreigners like me, aghast and in tears after passing Al-Shuhada Street. He lets us sit in his shop as we make sense of things, offers us coffee and smokes. His shop was cut off completely in 2002 when Israel built a wall across the street, segregating settlers and Palestinians. The wall is gone now but Palestinians still have to come a long way and cross a checkpoint to reach his shop, which means the shop doesn’t make good business. And yet, Muneer has been opening this shop every day since 2002, right across from soldiers and a checkpoint just metres away, as a mark of protest. In the Palestinian freedom struggle, the concept of sumud has a central place. It means steadfastness, holding on, persisting. It means Muneer.

Where the Line is Drawn: Crossing Boundaries in Occupied Palestine

A Possible Peace: Imagining Palestinians and Israelis Living Together

Palestine Will Not Leave You: A Journey with the Freedom Theatre