old post
What Happens When The Big Media Runs Amok: In the Words of Missing Student Najeeb’s Mother
June 6, 2018

Coping with the disappearance of her son Najeeb Ahmad, his mother is finding it even more difficult to deal with the media that has played a major role in defaming not just her son but the entire family. Fatima Nafeez who remains beside herself with grief after Najeeb disappeared from the Jawaharlal Nehru University campus following an altercation with Akhil Bharatiya Vidyarthi Parishad (ABVP) students has found the aftermath of a media assault even more difficult to bear.

In a long conversation with The Citizen Fatima brought out the problems that the hostile and irresponsible media had created for her and her family. What was for the media sold to vested interests little more than a headline, for the beleaguered family trying to get a response from New Delhi about the sudden disappearance of their boy, this endangered not just their security but lost them support and good will.

Fatima Begum is convinced that Najeeb is alive. And that he will return once this government loses power. He is so innocent and gentle, she says, that even his kidnappers would have been won over. I am sure he will come back, children disappear and come back five years later, he will be back, she asserts to convince herself as much as to convince the listener.

But what she is finding impossible to deal with is the media. When her son disappeared “everyone, it seemed the entire country was with me and my family, supporting us through the ordeal.” The students of JNU in particular became her family, and still are as “they have stood with me through it all, they are closer to my heart than my relatives”.

But just when she was finding solace in the support from what seemed to be all of India, came the mainstream media with reports that were calculated to strike at the very core of this support. 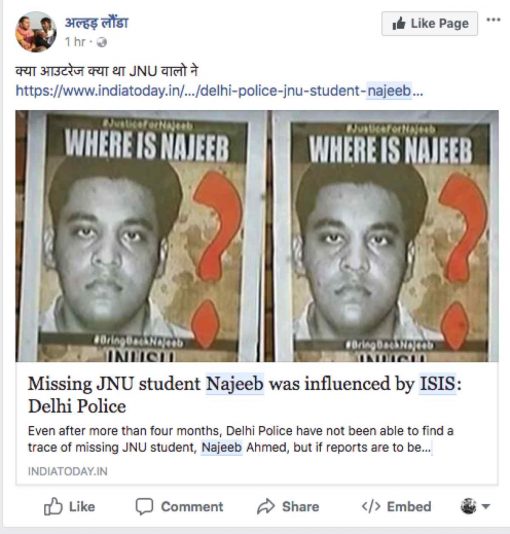 And as if on cue the reports were picked up by the trolls and the twitterati that created a viral storm: 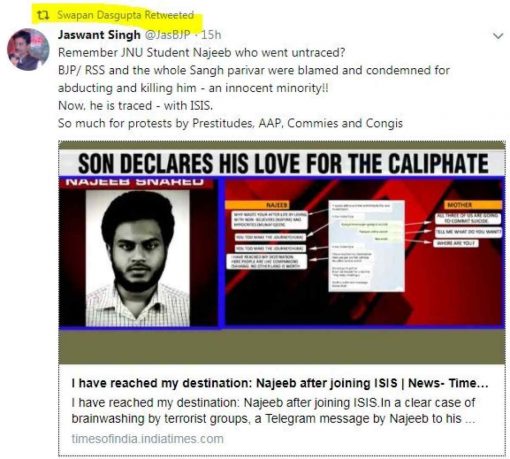 Two major publications carried reports citing the police without even bothering to verify the details. It was as if the ‘sources’ were sufficient to defame the missing student and linking him to the terror outfit Islamic State. RSS and now BJP leader Ram Madhav retweeted the above tweet, and then withdrew after a pause acknowledging a Delhi police denial of the same. Significantly the Delhi police denial of any such evidence linking Najeeb Ahmed to the IS or the “Caliphate” as the headlines screamed was published in an obscure corner of the Times of India in a few centimetres space, as against the headlines spreading the fake news. Others did not bother to respond at all.

Fatima and her family were dealt a body blow. The solace that they had found in the widespread support for their son and their plight disappeared was shattered, as a freeze set in. Except for the core group of JNU students and faculty, other supporters dropped them immediately or gradually moved away. The messages of support dried up, the offers of help were silenced.

Everyone initially believed the news flashed across the big media that dominates the news, and has been contributing to the spread of fake news, morphed videos, without so much as a word of apology for the devastation this causes.

Fatima’s family became pariah. Relatives moved away. Suddenly they were turned into untouchables, now fearful of their security. Her son could not get a job, rejected as soon as would be employers were told that he was Najeeb Ahmad’s brother. “They (the media) attacked and tried to finish my childs reputation, they humiliated and devastated me and my family, you will never know what we have had to go through because of the media,” Fatima says, her voice still quivering with anger and pain.

“India is everything for Najeeb, for us communities do not matter, we live in the ganga jamni tehzeeb of our country, that is why he preferred to join JNU even though he had got admission in Jamia, and then we have had to face all this,” she says. That her son who has disappeared has joined the IS, and yes of course the police finally denied having a shred of evidence to support this, the damage has been done.

The support has dwindled, people are confused, and Fatima realises now that she can no longer count on support from the media to right an injustice delivered by the media itself. Being a fighter—although that is not how she recognises herself—she filed a case against the media outlets including the big two India Today and Times of India. But then she is contending with forces with immense power, and went rushing to the courts in Delhi on 26 May for a hearing only for the judge to fix it now for September, a good four months later. For her the effort involved to clear her sons name is immense, ailing and ageing she has to take an eight hour journey by bus to Delhi to appear in court. This last date being in the middle of Ramzan, and the heat.

Fatima realises that they are trying to wear her out, and wear out the witnesses well in the larger case for justice. “But I cannot and will not give up,” she says happy that the eyewitnesses have not been intimidated by the threats, and have refused to back out either.

“Instead of helping me get justice this media is attacking my child and even after being told their news was wrong they have not even apologised,” Fatima says, “when my son comes back he will deal with them, but till then if you think you can exhaust me you are mistaken.” And as she points out the news headlines keep coming back through tweets and posts on the social media even today, barbs that hurt and wound, and as she says “destroy all that is right and good.”