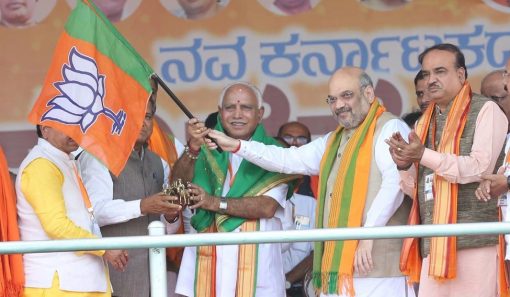 What can the people of Karnataka hope from Bharatiya Janata Party (BJP) which hosts people like Anant Kumar Hegde, a sworn in minister who wants to change the backbone of Democracy? With this question, ‘Karnataka Forum to Save the Constitution’ (KFSC) has been organising public meetings across the state. The Forum is led by the centenarian freedom fighter, activist and a journalist, H.S. Doreswamy. KFSC with the slogan, Gandhi mathu Gauriyannu Kondavarige namma mata illa(No vote for those who killed Gandhi and Gauri) has created a platform to revisit the history of BJP in the country.

Anant Kumar Hegde, the Member of Parliament had announced that the aim of BJP was to change the Constitution of India, because it speaks of secularism; in his infamous speech addressing a gathering of Brahmana Yuva Parishad in Koppal district on December 25, 2017, the current Union Minister of Skill Development and Entrepreneurship, had attacked the Constitution for its secular principles and values. On being questioned and criticised by other political parties, and due to a huge public uproar, the minister apologized in Lok Sabha by saying, “As a citizen, I can’t think of violating the Constitution…”. However, no one in his home state Karnataka is ready to forget his outrageous anti-Constitution and anti-secular speech. His speech has come as a red alert to the people of poll-bound Karnataka.

Just a month following Hegde’s statement, on January 12, 2018, four of India's most senior Supreme Court judges, in a press conference, warned that Democracy is under threat. Due to these developments and the campaigning of BJP in the state of Karnataka, KFSC sees the need to reach out to the voters and talk to them about Modi-Shah led RSS government which has become a threat to the democracy.

On April 28, 2018, KFSC had organised its convention in Bantwala, a taluk in the Dakshina Kannada district of Karnataka. The convention in the premises of Sparsha Kala Mandir was attended by a large gathering of concerned citizens. Prakash Raj, a versatile actor, is actively involved in protesting against the attack by the current government on freedom of speech and freedom of expression. According to him, BJP is the only party in the country that does not have an ideology: It does not, because, he said: “it is not a political party but a beast that the RSS, uses to get elected and be in power.”

Prakash Raj, Gujrat legislator Jignesh Mewani and the student leader of Allahabad University Richa Singh were the speakers at the conventions. The absence of women in the audience, the speakers noted, shows the presence of Sangh Parivar and BJP in the Dakshina Kannada region. The region in the past has seen attacks on women by the fringe groups of the Sangh Parivar.

The convention that took place amidst a tight security, discussed, who to vote, as K L Ashok of Karnataka Communal Harmony Forum, recognised the upcoming election as an election between the party that is anti-constitution and anti-secularism and the parties which are not. Ashok, by saying this, was asking the people present in the convention to make a choice between democracy and dictatorship, which BJP is striving hard to establish.

The Dakshina Kannada region has witnessed many instances of communal violence in the past. Remembering this, Prakash Rajsaid, “Dakshina Kannada region is known for its heritage, culture, tradition and serenity; and it is our, the people of this region’s, responsibility to preserve this identity and strive towards erasing the communal politics prevalent here because of BJP and Sangh Parivar.”

As mentioned earlier, KFSC is organising these conventions across the state in the light of upcoming elections in the state. On April 29, 2018, the Convention was held in the capital city of Bengaluru. H N Doreswamy and leaders and activist representatives of various unions in the state addressed the convention along with Prakash Raj, Jignesh Mevani, and Richa Singh.

The speakers at this convention addressed the issues of unemployment that is prevalent in the city. The silence of Modi government in the cases of Vijay Mallya, Nirav Modi and Gautam Adani, was questioned by the speakers. Narendra Modi will visit Bengaluru on May 1, 2018, and Jignesh Mevani noted that this is the biggest irony; the Prime Minister, whose government’s policies are anti-worker, will be addressing the people in the state on May day. Saying this, he urged the people to ask Narendra Modi about the promised employment to the youth and the Rs 15 lakhs that he had promised to deposit in everyone's account.

H N Doreswamy noted that the political parties contesting in these elections should be very clear that, the enemy is BJP. He also said that Congress or JD(S) should tell people publicly that they are not going to align with BJP no matter what, and only the party that declares this should be voted for.

The speakers in both the conventions observed that BJP is not interested in telling what their plan is for Karnataka if they come to power; Starting from Parivartana rally in November, till now, the BJP has not said anywhere, what is its plan for the state: as the speakers at the convention observed, they have been criticising Siddaramaiah government and attempting to evoke communal sentiments by labeling the current government in the state as an “anti-Hindu” government. Thus, when one does not know if the issues of unemployment, poverty, health, corruption and communal attacks will be addressed by BJP, both the conventions urged the people to think about based on what would they vote for BJP. Especially when the government in the center has failed to keep up the promises that Modi made in 2014 Loksabha elections.