I’ve lived 35 years in this megapolis – and have rarely seen a rally so meaningful, so satisfying 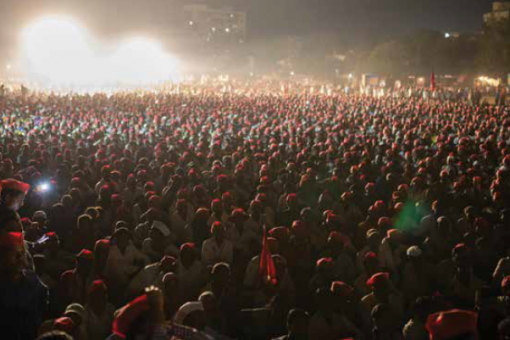 The marchers were from a few regions of Maharashtra, but spoke for every farmer and labourer in the country. The protestors were very poor farmers and workers – in India’s wealthiest state. Gaps between rich and poor are beyond obnoxious in Maharashtra. The state sees far more hunger deaths than many poorer states do. In September 2016, the Bombay High Court expressed its dismay over the death of 17,000 persons in tribal areas of the state, in just the preceding 12 months, due to malnutrition. (There were many Adivasis in the Long March).

It is also the state that has seen more farmers take their own lives than any other. Between 1995 and 2015, going by the National Crime Records Bureau, close to 65,000 farmers committed suicide in Maharashtra. That’s more than a fifth of the total of over 300,000 across the country in the same period. That surely played a role in the decisive rout of the long-ruling Congress–NCP government in the state in 2015. The BJP government has predictably made things worse – and cooked the suicide data even more aggressively than its predecessor. The present regime also ensured that Maharashtra was amongst the states worst hit by both the insane extension of cattle slaughter laws, and the devastation of demonetization. 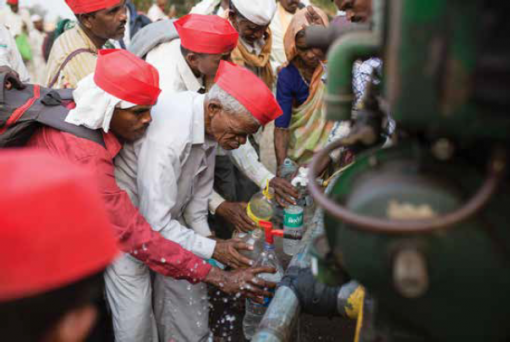 Mumbai is also a fortress of our highly corporatized media culture. You could see the importance of the farmers’ Long March to the “mainstream” media in the fact that not a single national daily or network had a correspondent at the start of it in Nashik. When the reports on the March by Parth M.N. of the People’s Archive of Rural India (PARI) went up early the next day, the media found this was far too big to ignore. Lots of reporters were suddenly sent off to join the Long March – especially in its last stretch. One national news agency sent its crime correspondent to cover the farmers’ march. (Just in case there was any violence – ah, you know what these farmers are like, always making trouble.) 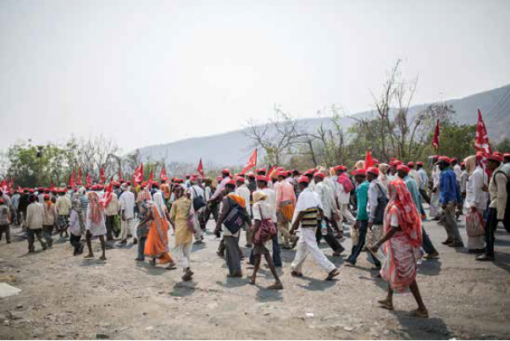 For many months, the media had also been reducing the farmers’ demands, and most of their distress, to their seeking a loan waiver. While that was an important element of their agenda, they had many more demands that went to the heart of the country’s agrarian crisis. The implementation of the key recommendations of the National Commission for Farmers was one of those. These farmers saw the Union Government’s claim of having implemented its promise – of Minimum Support Price equalling the Cost of Production plus 50 per cent – for the charade it was. They were signalling the collapse in prices they received in the real world. That, while the actual and comprehensive costs of cultivation were soaring, their incomes were in decline. That the agrarian crisis is about the corporate hijack of Indian agriculture. That their problems were driven by conscious economic policy and not by natural calamity. 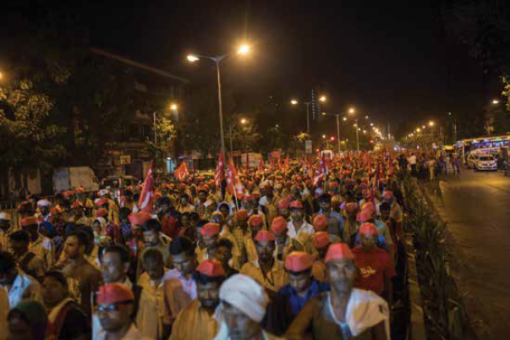 There were thousands of Adivasi farmers demanding the implementation of the Forest Rights Act of 2006 that could confer on them proper title deeds to lands their families had been cultivating for perhaps centuries. They were making the point that even their indebtedness was the outcome of the deliberate policies on credit followed by successive governments. And how brilliantly they did it. With a march long on distance, short on rhetoric. By walking at night and timing their arrival at Azad Maidan in Mumbai, so as not to in any way disturb the city’s children appearing for board exams the next morning. By looking the Maharashtra Government squarely in the eye – and not blinking. I’ve lived 35 years in this megapolis – and have rarely seen a rally so meaningful, so satisfying. 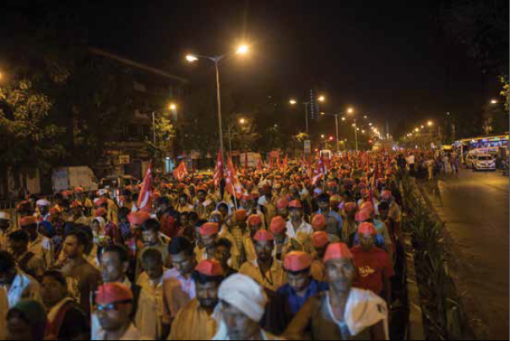 This list of demands and grievances has been ignored.

During the past two years, the BJP central and state governments had given certain specific assurances to the Indian peasantry. They had said that they would accept the demands for a series of concerns, such as: 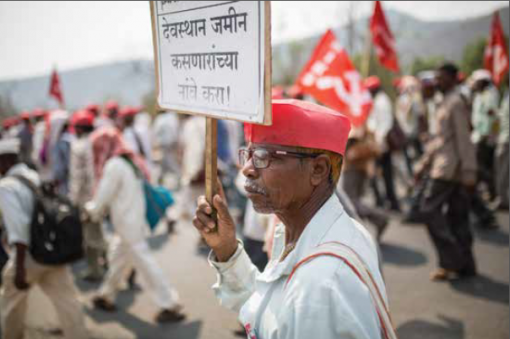 
• Compensation for losses sustained by farmers due to disastrous pest attacks (such as pink bollworm on cotton).
• Vesting of temple and pasture lands in the name of the tiller.
• Opposition to acquisition of peasant land in the name of fancy and elitist projects, such as the bullet train and super highways.
• Issues connected to the public distribution system.
• Complete change in the river linking scheme that is to start in Nashik, Thane and Palghar districts. The AIKS demands that the tribal villages not be submerged and that the water is made available to these districts and to other drought-prone districts in Maharashtra. 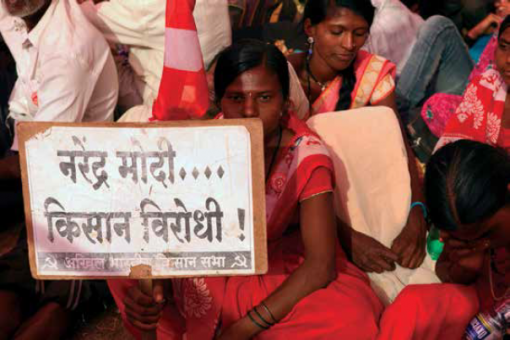 Over the past two years, the BJP governments at the centre and at the state have betrayed the assurances given to the peasantry. This list of demands and grievances has been ignored. The Kisan Sabha organized the Long March to condemn the BJP state and central governments for consistent betrayals.

The people responded with great love and appreciation for the Long March. People from the working class and the middle class –Hindus, Muslims, Sikhs, Dalits – welcomed the march with open arms in several localities. Groups of hundreds of people, including youth and women in large numbers, congregated at various spots en route to felicitate the marchers. They donated generously – both in cash and in kind. Ordinary people came forward to give us water, sharbat, biscuits, food and even footwear. In my 40 years of life in the Left movement, I must admit that I have never come across such a spontaneous outpouring of support and solidarity.

Many of the ordinary people who met us in Mumbai city, including several media persons and even some in the police explained to us the reason for their solidarity. This is the sum and substance of what they said – we are also the children of farmers; our roots lie in the villages; we know the plight of farmers; and that is why we have come out in your support. 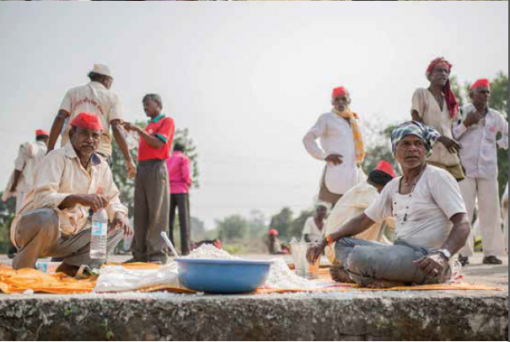 The biggest and most spontaneous reception to the Long March was in the Dalit locality of Mata Ramabai Ambedkar Nagar at Ghatkopar in Mumbai, the very place that had seen the shooting down of 11 Dalits in police firing under the BJP-Shiv Sena regime 20 years ago. The Dabbawalas of Mumbai also contributed their mite to the cause. In the most touching move, farmers from Raigad district, under the leadership of the Peasants and Workers Party (PWP) brought 1.5 lakh rice bhakris and dry fish for the marchers on the last day at Azad Maidan. The CITU, AIDWA, DYFI and SFI in Mumbai and Thane-Palghar districts launched a campaign amongst the people in support of this Long March, but the mass response went far beyond that. This response of the people further steeled the marchers in their resolve. 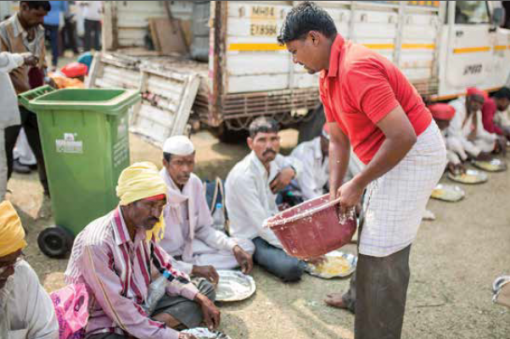 The CPI(M) Maharashtra State Committee had, of course, given full support to this Long March right from the beginning. Another Left party, the Peasants and Workers Party (PWP) had also supported it throughout. CPI leaders were present at Nashik to greet the march when it began. All other political parties except the BJP – viz. Congress, Nationalist Congress Party (NCP), Samajwadi Party, Republican Party, Aam Aadmi Party (AAP), Maharashtra Navnirman Sena (MNS) and also the Shiv Sena, which is a partner in the state government – openly supported the Kisan Sabha Long March, and their top leaders either joined the march for a time or their support when it had stopped for the night at Sion or when it culminated at Azad Maidan. The massive response of the people and the media was the key reason for this unprecedented support of many unlikely forces right across the political spectrum. 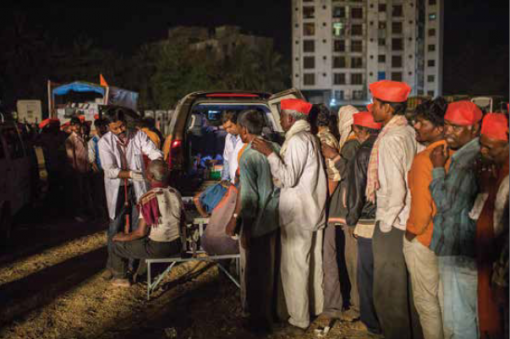 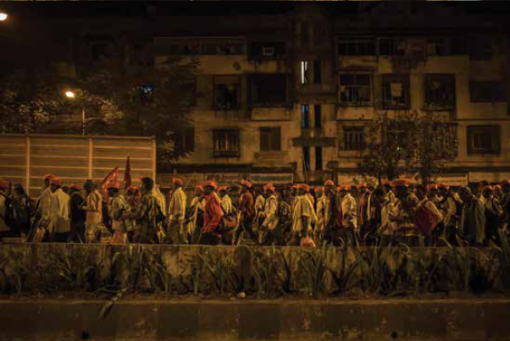 The print, electronic and social media all over the country played a magnificent role. They highlighted not only the Kisan Long March but also the deep agrarian crisis and burning peasant issues which have relevance for the whole country. It began with a video taken by Dr. Ajit Nawale of tens of thousands of farmers marching down the hill of the Kasara Ghat near Igatpuri on the morning of Day Three, with the picturesque view of hills on one side and valleys on the other. The red banners, red flags, red caps and the sheer numbers really woke up the media. The video went viral on social media and after that we started getting a lot of coverage in the mainstream print and electronic media right up to the culmination of the Long March.