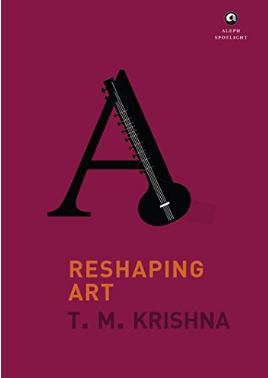 A Karnatik music class is not a place for musical exchange alone. It is a cultural space, a caste-specific cultural space. From the way students are expected to dress to the pictures that decorate the walls, the environment informs you of what is the norm. Girls almost always had to be dressed in salwar-kameez or what we call pavadai-davani (half-saree) in south India. There was no question of any other attire as far as girls were concerned but teenage boys could, of course, get away with jeans or even shorts. I also know of some (rare) teachers who insist that boys too have to be dressed in dhotis. The pottu (bindi) is an absolute must. If not worn, the girl may be handed one by a friend or the music class would be converted to an ‘our culture’ class. This is exactly how Hindu boys and girls are expected to dress when they enter temples. Now, all this has very little to do with music but is bundled in as a show of respect for the music. Karnatik music is, in their minds, Hindu—Brahmin—music! The classroom walls will not only have pictures of the great composers, but important Hindu deities too keep watch over us. I have never seen Hindu gods or goddesses such as Mariamman (a non-upper caste goddess) find a place in a Karnatik music classroom.

As we learn compositions, the teachers explain the meaning of the lyrics. Since most of Karnatik music is Hindu in content, we are also learning mythology. But it does not stop there. The composers are deified (avatar purushas), and folktales about their magical deeds are shared. At the end of a few years, we are convinced that they were superhumans who composed through divine benediction. Absolutely everything about them is perfect, morally correct and spiritually elevated. Missteps, if any, were only tests conducted by the divine overseer. A lesson for all of us!

Our teachers are of course only passing on what was handed down to them; nevertheless the impact is immense. Karnatik music becomes a symbol of chastity and purity. There is no room for the baser emotions of passion or sexual desire. Interestingly when we are taught padams or javalis (compositions that are erotic in content), the teacher would not bother to share their meanings! I wonder why. This does not stop with the class. Attend a music concert and the stage, the homogeneity of the upper-caste audience, the nature of conversations, the introductions by the impresarios and the appearance of the musicians will make you feel like you are attending a Brahmin congregation. Whenever Karnatik musicians speak about their art, they invariably invoke deities and present themselves as priests or Vedic scholars. A few musicians have gone to the extent of distributing vibhuti to their fellow artists on stage. Musicians will, more often than not, speak of the composer’s bhakti and the infallibility of these great souls.

A closer peek at the dais and up on the platform will reveal the entire pantheon of Hindu gods. I do not mean to criticize faith but the undeniable conflation of religion, caste and art comes to light when we pay attention to these habits. It is not just about praying to the gods for a successful concert. This merger on a concert stage makes everyone conflate art and faith, making art entirely dependent on belief. We refuse to accept the music as just art. In fact, saying such a thing is blasphemous and hence musicians have to create the impression of being moral, pious creatures even if they are not. Or, maybe, like all of us, they compartmentalize their various selves. Even today, women musicians feel the need to de-sexualize themselves and radiate piousness. This is taken as a sign of their seriousness towards the art form. The less skin you reveal, the more divine your music. All this is bulldozed upon them in the name of appropriateness.

In this context, I would like to bring back a word that I referred to earlier in this book: empathy. It is derived from the Greek empatheia, meaning ‘in pathos’; in other words, having a sense of merger with another’s suffering. To feel empathy, therefore, is not just to feel an appreciation of another’s condition but to actually become one with it, especially the condition of suffering. This is only possible if we forget or discard our own emotional self. When in empathy I do not emotionally exist, yet I feel. Art experience is empathetic; it allows us to feel but not as ourselves. What are we one with? I would just say that we feel a unity with all that engulfs us. Life? It may be another person’s impression of life (the art object) but when we receive as the artist herself does, it is a nonpersonal impression.

The cynic may just find all this fanciful. He/she would say that the mind is playing tricks, further confusing us into believing in these powers of art. I will respond with just a few thoughts. Nothing I have said here is groundbreaking. Most of you have come in contact with this enchantment. As you read my descriptions, it possibly replayed in your minds a film, a dance recital, a song, a percussion ensemble, a play or just a lullaby that your neighbour sang to her child every night. Yet it disappears, vaporises in seconds and we remember it only when it arrives again on our doorstep. There is no way to explain, find logic or rationalise it and that makes all this harder to accept.

For a long time, I was uncomfortable with this art experience because it made me vulnerable. To be in a vulnerable state can be frightening. Vulnerability is intimacy that has nothing to hide. Art doesn’t request you; it pushes you into this state. I use vulnerability in positivity, not in its exploitative avatar. When vulnerable, open and defenceless, our sensory system allows life to enter our body in a way that we would never permit when in control. We are so desperate to guard, regulate and defend who we are that we never really experience life. We experience only what we have already decreed, entirely preconceived. But when art breaks down these walls, life just flows and every moment is fresh, new and renewing.

These art experiences happened all by themselves and I believed—and those I confided in also told me—that they cannot be willed. I would still try and, at times, in desperation even fake it. But I soon realized that though I cannot demand its presence, I can prepare myself to be open to its arrival. This meant creating a mind space that was empty, free and uninterrupted.

This inquiry cannot stop here. All these abstract thoughts have to be connected to what we are and what we do. Otherwise they are, as the critics would say, just emotional ruminations.

Why was the music not enabling many more such experiences? We were enjoying the music and heading home happy but nothing more was happening through the art. As I began probing my engagement with the art, I realized that everything that was built around the art— the scaffolding, paraphernalia, social constructions—were barricades. As a Karnatik singer I had to role-play, act as an interlocutor between my community and its moral, religious and cultural moorings. Every time I rendered kirtanas, expounded ragas or cracked arithmetic patterns, I was holding up my community flag and waving it with gusto. The entire environment participated in this celebration. There is no doubt that the music was beautiful but that it was constricted is also true.

This led me to a long journey into the archives of Karnatik music, its musicology, practice and social history. I was troubled by the thought that the music might collapse if I were to remove all its social anchors. I was seeking proof of a musical core, the actual components of the form that give life to this art—those elements that make it what it is and will remain irrespective of everything else that it may shed or acquire. I had to also be prepared for the possibility that there is no such truth. In which case, all these experiences would mean nothing.

But I did find something. Karnatik music depends only on three cardinal elements—raga, tala and the text. Art happens when the musicians and the audience remain drenched in the aesthetic charge that emerges from this tripartite correspondence. I know I have simplified what is a far more complex interplay but, in the context of this discussion, this ought to do. I speak of the art I know but every art form has an elemental self. Everything else has been organized to suit the people who assemble, perform and consume the art. In the need to satisfy community needs, aspects of music have been given slipshod treatment. So the glittering paint that covers the art not only reflects ornateness, it also hides the art’s sanctum sanctorum. If any artist is willing to shake off all those exteriors, delve into the art, rediscover its marvels and bring back to the fore its aesthetic strengths, then suddenly the art is rejuvenated and its secret vault revealed.

You could ask if this means discarding Tyagaraja or Muttusvami Dikshitar. It is not a question of disposing of the past. There is no denying that there are many aspects on which I am at loggerheads with them. Tyagaraja was an extraordinary composer, yet amidst the musical genius is his Brahminical import. He was a product of his social boundaries and we need to understand that. The problem arises from the fact that his understanding is accepted as the gospel truth by the insiders, requiring everyone to be in agreement with his thinking. The art’s protectors believe that other viewpoints do not have a space here and that their very presence is polluting. This is one of the problems even with the spiritual—it can be casteist and doctrinaire!

T.M. Krishna, an innovative vocalist in the Karnatik tradition, is also an articulate examiner of cultural history. His book, A Southern Music, (2013), has been highly acclaimed as the first of its kind, combining actual music practice, technique, history and polemics.

This extract from Reshaping Art (ALEPH Books, 2018), by T M Krishna, and has been published with permission from the publisher.