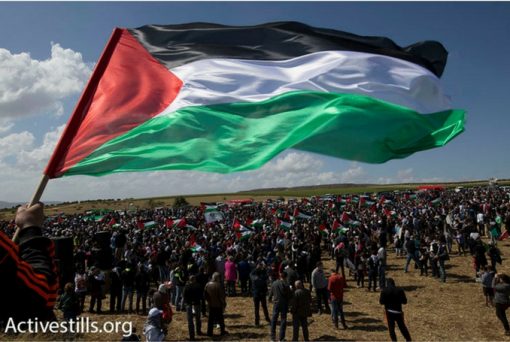 Israeli forces continue to open fire against Palestinians as the 45-day long Great Return March reached its third week last Friday. Having already killed more than 30 people – including journalists covering the protests, and injured over a thousand, last Friday, Israeli forces have injured at least 700 more, including 17 medical personnel, by using snipers to shoot protesters.

The Great Return March started on March 30 – remembered in Palestine as the Land day, in commemoration of the uprising on that date in 1976, after the Israeli government confiscated over 5,000 acres of land owned by Palestinians in the Galilee region of the country to change the demographics of the area from a Palestinian majority to a Jewish majority. The march is expected to continue till May 15, when, on the occasion of Nakba day or the day of cataclysm, the protest is expected to culminate into “the march of millions” to the Israeli border by Palestinians demanding the right to return to the land, from which, over 750,000 of them were evicted or had to flee after the creation of the state of Israel on May 15, 1948.

With the number of dead and injured likely to rise as Israeli authorities have refused to withdraw the order handed down to their soldiers on the border to use live fire on protesters on the other side of the fence demanding their right to return – a right that has been stipulated in Resolution 194 of UN general assembly – B'Tselem, a Jerusalem-based human rights group founded by Israeli academicians and left-wing groups during the time of the First Intifada in 1989, called upon Israeli soldiers during the protest last Friday to refuse to obey orders asking them to shoot unarmed protesters.

“An illegality that pains the eye and outrages the heart, if the eye be not blind and the heart be not callous or corrupt”

As a part of the campaign launched by the group, titled “Sorry, Sir, I can't shoot”, advertisements were published in the newspapers to inform Israeli soldiers that orders to shoot unarmed protesters are illegal. Relying on the judgement on the Kafr Qasim Massacre case when Israeli Border police had shot 49 Arab Israelis including women and children in 1950s, the group quoted the prominent Israeli Judge Benjamin Halevy, who had ruled that Israeli forces should have refused to obey orders that were manifestly illegal.

“As Justice Benjamin Halevy ruled in the Kafr Qasem case back in the 1950s, the illegality of such orders ‘is not a question of form, nor is it imperceptible, or partially imperceptible.’ On the contrary, it is a case of ‘unmistakable illegality patently evident in the order itself, it is a command that bears a clearly criminal nature or.. the actions it orders are of a clearly criminal nature. It is an illegality that pains the eye and outrages the heart, if the eye be not blind and the heart be not callous or corrupt.’”

While Israel’s Prime Minister, Defense Minister and Chief of staff are the ones, who are primarily guilty of issuing these unlawful orders, “It is also a criminal offense to obey manifestly illegal orders. Therefore, as long as soldiers in the field continue to receive orders to use live fire against unarmed civilians, they are duty-bound to refuse to comply,” according to B’Tselem’s legal analysis . This is consistent with the Dostler case in Nuremberg trials where a Nazi General's defense that he was following his superior's orders was overruled on the grounds that such a defense does not exclude one from the liability to be punished for executing illegal orders.

Gush Shalom, an influential Israeli peace organisation, has said in a press release :

“The use of live ammunition [is] blatantly unlawful in the case of soldiers firing from a great distance at demonstrators located on the other side of the fence that separates Israel from the Gaza Strip. In addition, it is impermissible to order soldiers to fire live ammunition at individuals for approaching the fence, damaging it, or attempting to cross it. Obviously, the military is allowed to prevent such actions, and even to detain individuals attempting to carry them out, but firing live ammunition solely on these grounds is absolutely prohibited.”

Jewish activist: How many more Palestinians need to be killed before they speak out?”

Members of the Jewish community have spoken out against Israel’s war crimes on Palestinians, both within Israel and in the country which is its most powerful backer, the U.S, where the powerful Jewish lobby has been pushing the State to back Israeli occupation for decades.

A group of 20 activists from “If Not Now”, a Jewish-American group established in 2014 during Israel’s war on Gaza, demonstrated outside the Jewish Senator Dianne Feinstein’s office on April 13. They demanded that she raises her voice against the violence perpetrated by the Israeli state on the Palestinians. Later in that day, after nine of these activists were arrested for blocking the entrance to her office, the Senator tweeted that this violence is “exceptionally destructive for both the Palestinians and the state of Israel. It must end. Violence is not the pathway to reconciliation,” 972 mag reported .

A series of protests have been held by Jewish activists in different cities across the U.S outside prominent Jewish institutions since April 3, demanding that these institutions condemn Israel’s war crimes. In the course of these protests, over 30 of these activists have been arrested. One of them, Elon Glickman, speaking to the protesters blocking the entrance to Jewish Federation of Greater Los Angeles on April 11, said:

“I grew up in the Jewish community of Los Angeles, where I learned that freedom and dignity are core Jewish values. As young Jews and members of this Jewish community, we’re asking the Federation to do the bare minimum and condemn this unconscionable violence. How long will they stay silent as live ammunition is used against Palestinian protesters? How many more Palestinians need to be killed before they speak out?”

Earlier this month, protests were also held in various cities across the world, including in Milan, Naples, London, Jakartha, Athens, Berlin and Istanbul, Palestine Chronicle reported .