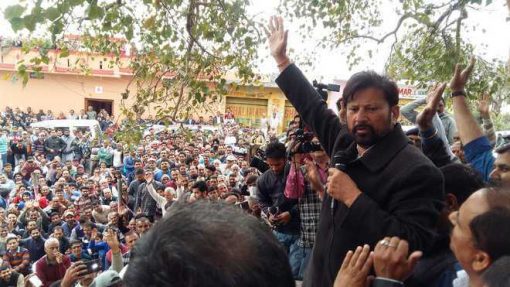 Amid simmering tensions in Jammu region, the BJP Minister, Lal Singh, who was forced to resign last week for rallying in support of the accused in rape-and-murder of Kathua girl, today took out a march in the Hindu majority region to demand CBI probe into the case.

Witnesses and reports said hundreds of Singh’s supporters assembled at Satwari Chowk in Jammu city today afternoon to start a march towards Kootah village in Kathua where the tragedy unfolded. Some of the supporters wore saffron colored robes while chanting slogans to demand release of the accused.

“She was our daughter also. We are fighting to punish her culprits but it is a tragedy that people living far away are interpreting this case without knowing the facts. Our fight is for justice only which will be done only by identifying the real culprits,” Singh said, in an oblique reference to the Kashmir-based media that played a crucial role in exposing the culprits.

Addressing his supporters in Jammu before starting the Kathua march, Lal Singh, who is MLA from Basholi in Kathua, said people of his constituency are not happy with the investigations carried out by the J&K Police's Crime Branch, which has arrested all the eight accused, including a juvenile, in the case.

“By all means give justice to the victim by arresting the real culprits, not people who have no links with the crime. These arrests have created tensions in Jammu and in the interest of the state, the government must transfer the case to the CBI,” Singh, who was previously a Congress leader, told the rally before starting the march.

According to a BJP leader, the march to Kootah has been organised to express solidarity with the families of the eight accused booked in the case. Reports said relatives and family members of the accused are holding a protest in Kootah to demand release of their wards and for transferring the case to the CBI for a fresh investigation.

Following the Prime Minister Narendra Modi’s intervention, Singh, who was the forest minister in Mehbooba Mufti government, along with the J&K's industries minister Chander Prakash Ganga, were forced to step down after it turned out that they had lend support to a rally demanding the release of alleged culprits organized by a friend group, Hindu Ekta Manch.

Singh’s march, which is likely to inflame the prevailing communal tensions in the state, comes a day after Jammu and Kashmir governor NN Vohra accepted his and Ganga's resignations. The BJP has started shortlisting fresh faces to replace the shamed duo, both of whom have expressed no regret in supporting the alleged culprits, including a former revenue officer and a special police officer.

With the issue attaining communal overtones and Deepika Singh Rajawat, the lawyer of the victim's family, facing threats, the father of Asifa, yesterday filed a petition before the Supreme Court, seeking orders to transfer the case outside of Jammu and Kashmir, preferably Chandigarh, for “safety and security” reasons. The court ordered J&K government to file its response by April 25.

The crime branch charge-sheet in the case states that the minor girl was abducted, starved, drugged and gangraped during her captivity at a temple in Rasana whose custodian, Sanji Ram, is believed to be mastermind of the case.

According to the crime branch, the rape and murder was planned in a systematic manner with communal hatred harboured by Sanji Ram against the Muslim nomadic community of Bakarwals. The motive was to create fear among the Bakarwal community and force them to abandon their homes.