old post
A convention in Delhi will mark one year of G N Saibaba’s arrest
April 16, 2018

Last month, Professor G N Saibaba completed one year in prison since he was convicted for alleged links with Maoists by the sessions court in Gadchiroli (Maharashtra) under the Unlawful Activities (Prevention) Act. The Committee for the Defense and Release of Dr G N Saibaba is organising a meeting on 22 April from 1 pm at Rajendra Bhawan to discuss the UAPA. According to an email sent by the organisers, "The purpose of the convention is to extend strong advocacy which can transcend both the limits of jurisprudence and the marked silence and ignorance on the question of disabilities, as well as the barbarity of the very law UAPA." The convention will have Justice Sudarshan Reddy (Retd.),  Justice H Suresh (Retd.), Adv. Prashant Bhushan, Prof. Haragopal, Adv. Rajwinder Singh Bains (HC Chandigarh), and Adv. Rebecca John. We republish the pamplet published by the Defence Committee below. 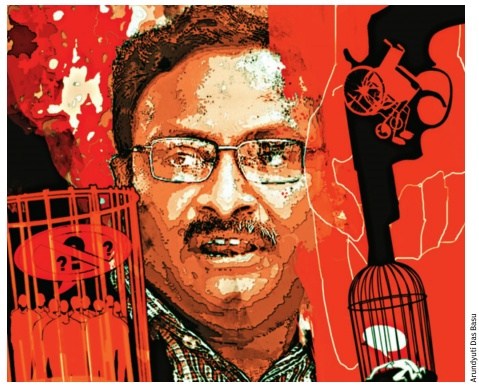 The Spectre of UAPA and the Question of Political Prisoners: A Day Long Covention

More than a year has passed since Dr. GN Saibaba got convicted along with Vijay Tirki, Pandu Narote, Mahesh Tirki, Hem Mishra and Prashant Rahi by the Gadchiroli Sessions Court. The Nagpur Bench of the Bombay High Court recently rejected the bail application of Vijay Tirki and Prashant Rahi without even considering the merits of the arguments of their lawyers. A passing reference was made that those arguments may be looked into when the appeal against the conviction is taken up. It is increasingly becoming evident that the long arm of the executive has made the judiciary indifferent to its purported role of defending the rule of law. As the public outrage against the incarceration of Saibaba and others is gathering momentum, it is important that we take stock of the emergent issues at hand so that we call out the anti-democratic, anti-people intent of the state with renewed vigour. The issues that we invite your attention to are also significant in our continuing struggle to ensure justice for all political prisoners.

The Unlawful Activities (Prevention) Act (UAPA), under which Dr. Saibaba and others have been convicted, is undeniably one of the most draconian instruments of law that has been wielded to stifle any kind of political activity that is remotely against the establishment. It becomes emergent that every campaign for the release of political prisoners has to thoroughly expose the anti-democratic let alone unconstitutional nature of the Unlawful Activities Prevention Act (UAPA). The very fundamentals of a democratic polity is being undermined through this act so much so the moment you are charged and convicted under UAPA, you are labeled as you tend to cease as a person on whom law applies on an equal footing as in the case of any other citizen. The all pervading sweep of this draconian instrument looks at the nomenclature of crime, especially acts of ‘terror’, in a simplistic way to the extent the science of jurisprudence and the need to maintain a scientific temperament become secondary and the moribund logic of the ideology of war on terror takes precedence. Socially for the prisoner and his/her family a new life starts: of stigma; suspicion; surveillance and a total lack of opportunity to be seen as human beings capable of a meaningful productive existence. This logic extends within the prison and the word UAPA/naxalite/terrorist becomes the markers that defines what they are and hence are bodies that can /should be kept under constant watch. Admittedly, every campaign for the release of political prisoners has to thoroughly expose the anti-democratic, not to say unconstitutional, nature of UAPA.

The all-pervading reach of an anti-terror Act like UAPA has made the judge more than convinced that the Rights of Persons With Disabilities Act (henceforth the Disabilities Act) which India has enacted with much fanfare in 2016 ceases to exist for a 90 percent disabled who has been convicted under UAPA. In the specific context of Dr. GN Saibaba, who is perhaps the only person in his condition forced to live under the harshest form of solitary confinement in a prison cell, the label of a prisoner convicted under UAPA is a double jeopardy. As a person with 90 percent disabilities, everyday life as a human being is next to impossible for him without specific care and support that factors in the severe physical constraints. We need to address the question of what the naming of Saibaba as a UAPA prisoner does to his specific rights as a severely disabled person with multiple ailments that have consistently deteriorated in confinement. Can we expect any sensitivity to a prisoner with severe disabilities from a judicial system when the Sessions Court judge laments about the inability to hand over a much more rigorous punishment than provided by the statute as he is constrained by law? Or from a judge who wants to punish Saibaba for having a strong and active mind inside a disabled body? The more banal and protracted the incarceration of Dr. GN Saibaba the more specific is the message for those—intellectuals, rights defenders, activists—who would dare say a word against the wisdom of a model of governance that is violently, unabashedly pro-corporate while the adivasis, dalits and muslims have become dispensable entities.

While we are organising this convention a bail application has been moved in the Nagpur bench of the Mumbai High Court. The court ordered on the 20 March 2018 for a medical report to be filed within two weeks. As we write this the prosecution if yet to file a medical report. The life partner of Dr. Saibaba, A. S. Vasantha is not even allowed to visit him when he is being taken to the hospital. The lawlessness of the extraordinary law UAPA is such that the high court has asked the prosecution if there is any provision to allow the spouse or relative to be with the prisoner while undergoing medical care. The Disabilities Act ratifies the United Nations Convention for the Rights of Persons with Disabilities (2007) of which the Indian government is a signatory, which requires signatories to guarantee equality and all human rights to the disabled.Particularly, this equality can be attained only by ensuring that persons with disability can exercise their bodily integrity and individual autonomy with “inherent dignity”with “independence and accessibility”, that is, their right to life as stated under the 2016 Act. In the case of Saibaba, it is his very life that has been put under serious peril by his conviction under UAPA.

Moreover, despicable living conditions and lack of basic facilities in prisons even for those who are not disabled in Indian prisons makes it utterly impossible for persons with disabilities to live a dignified existence and thus denies their right to equality by forcing them to live an inhuman and precarious existence in custodial confinement. In such a scenario, the life imprisonment awarded to a 90% disabled man is not merely a violation of the 2016 Disabilities Act, but it demonstrates the brutality and deliberate attempt by the state to execute his murder for the apparent “crime” of speaking about the wretched conditions of the oppressed people of this land. At a time when convicted prisoners with incriminating evidence against them like Babu Bajrangi(who was instrumental in the Naroda Patiya massacre during the Gujarat pogrom) is granted bail 14 times on the basis of flailing health grounds, the denial of bail and incarceration of Saibaba and 5 others exposes a capitulated judiciary and false claims of democracy wherein the rights of citizens are blatantly violated and suspended under a draconian law like the UAPA.

Kalpana Kannabiran has succinctly summed up this dehumanization of GN Saibaba in the light of the recent Supreme Court judgement on privacy. To quote her:

The privacy Bench reiterated the words of Justice Krishna Iyer in the Prem Shankar Shukla case: “The guarantee of human dignity, which forms part of our constitutional culture, and the positive provisions of Articles 14, 19 and 21 spring into action when we realise that to manacle man is more than to mortify him; it is to dehumanise him and, therefore, to violate his very personhood, too often using the mask of ‘dangerousness’ and security…” and that the right to life cannot be restricted to mere “animal existence”. How do we begin to understand the sanctity of life, dignity and bodily integrity for a person with disabilities? If handcuffing is an extraordinary and excessive restraint on an ordinary prisoner, what constitutes excessive restraint beyond the writ of law for a person with disabilities?

To deliberate more on such pressing questions we would wish your participation in the convention which would be addressed by renowned judges (retd) of the Supreme Court and High Court, Senior advocates, prominent civil libertarians. Please do attend and pass on the message.

Lest we Forget the Slow Murder of G.N. Saibaba

G.N. Saibaba – The Teacher I Could Not Have

“I am on a month’s lease of life. Justice or death, which will win?”: GN Saibaba