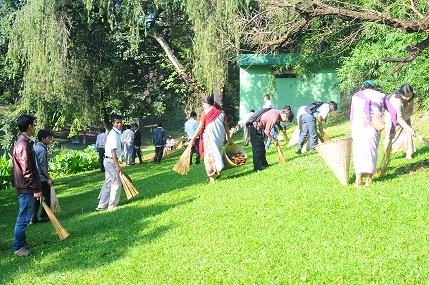 The government of Meghalaya’s Tourism Department came out with a notification on 20 January, 2012, “Meghalaya Tourism Development and Investment Promotion Scheme,” which was to come into effect from the date of the issuance of the notification.

When a government plans to introduce a scheme like this, they need to take into account things like land ownership, community security, their preparedness, consensus, and support for the scheme. These were completely ignored in Meghalaya's tourism scheme. This article examines the policy to see the effect that implementing this policy will have on the people of Meghalaya.

The tourism scheme has some major problems, both in its designing and implementation. For instance, there is conflict between the roles and powers of the local government bodies and the traditional institutions of governance. This is a result of the exclusion of the traditional government bodies during the policy designing. As a result, many of the scheme’s proposals go against the traditional values and belief systems of the communities. Moreover, most of the government departments are unsure about the division of tasks among the various government departments itself. This shows that the tourism policy has also failed to come up with a clear management framework for putting its plan into action. All of this just makes it clear that the scheme is not fit to be implemented.

The policy has been designed in a way that the full advantages of regional policies and the policies of development agencies such as the NEIIPP (North East Industrial and Investment Promotion Policy 2007), the State Industrial Policy, the Forest and Wildlife Protection Policies (Forest department), NEC (North East Council) and the Ministry of DONER (Ministry of Development of North Eastern Region) are utilised. Infrastructure facilities have also been planned and will follow the PPP model.

For this, the government plans to set up an advisory board which will decide the direction of the development of tourism industry in the state and take the responsibility of bringing in or facilitating synergy and co-ordination between the Tourism Department and other government departments.  Its implementation, however, has been kept on hold.

The policy talks about protection and conservation of natural resources and sustainable development of tourism, their slogan declaring “Go-Green Meghalaya,” promoting practices like rainwater harvesting and reducing water consumption. The Meghalaya Tourism Development Corporation (MTDC) has been set up, charged with the responsibility of the development and promotion of tourism in Meghalaya. The Corporation is tasked with increasing its revenue to enable it to carry out promotional activities. MTDC is also supposed to organise package tours to important destinations. Nowhere is the role of municipalities, the Meghalaya Public Works Department and the Meghalaya Pollution Control Board, mentioned to achieve these objectives. 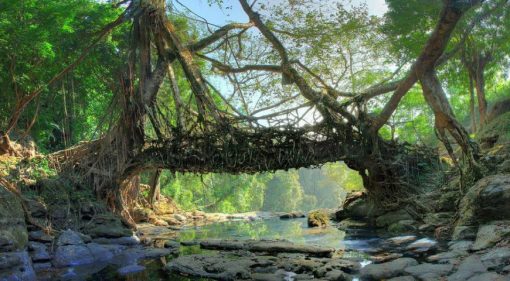 It also talks about creating rural tourism through home stays. Regarding this, it vaguely mentions that “…programs taken up by NGOs and other agencies will also be streamlined by bringing them under one umbrella for convergence in the development and promotion of the product.” The traditional administrative bodies have been completely ignored while making this plan. Although the Meghalaya Tourism Development Corporation (MTDC) is also responsible for organising package tours to Cherrapunjee and other wildlife and eco reserves of Meghalaya, the policy does not mention the villages where the home stays for these tourists will be set up.

The Meghalaya Tourism Development and Investment Promotion Scheme is focused on revenue generation through job creations, increasing national connectivity through improved means of transport, and advertising the state’s geographical and cultural diversity. But it does not talk about developing a comprehensive management plan for regions where the ecology, already in a fragile state, might be directly or indirectly impacted.

This problem stems from the confusion regarding land ownership. Traditional land ownership patterns were not taken into account while drafting the tourism policy. Meghalaya is primarily a rural-agrarian state where 80% of the population resides in rural areas and 65.8% of working population is involved in agriculture and allied work. Here in the rural areas, traditional forms of governments are preferred and followed.

After the attainment of statehood, the Government of Meghalaya enacted a number of acts related to land laws. The most important among these are The Meghalaya Transfer of Land (Regulation) Act, 1971 and The Cadastral Survey and Preparation of Records of Rights Act, 1980. The Revenue and Disaster Management Department oversees the management of land in the state and maintains the land records. However, it is important to note that the lands in Meghalaya have not been surveyed, hence, no records of rights exists. This is because the Revenue and Disaster Management Department is not clear about the extent of its own role and functions, and also claims that it’s the municipalities who should be maintaning these records. This confusion has left the locals free to continue following their traditional patterns of land ownership, i.e., the Ri Raid System (community owns the land collectively), Ri Kynti System (individuals own the land privately), and the Ri Kur System (land is owned by the clan which is in the majority). Further, the village headman, the Nokma, owns the patta land, i.e., the land that was leased out to small farmers by the British during the colonial rule for paddy cultivation.

Now, the tourism policy has come up with various plans such as building homestays in villages, acquiring land from villagers and converting them into eco reserves and wildlife reserves, etc. However, no link has been established with the locals of these villages and the traditional government bodies. The people in rural areas have followed traditional forms of governance, like the village council and the village headman, and traditional land ownership systems, since time immemorial. Therefore, state government should have consulted these traditional government bodies while coming up with plans. However, this was not done.

Meghalaya has an estimated forest area of 9,506 sq. km of which less than 1%is under the control of the State Forest Department. The rest are under direct or indirect control of the autonomous district councils of Khasi Hills, Jaintia Hills and Garo Hills. About 88% of the forests are under the control of the tribal communities. A sizeable chunk of the forest lands are also owned by private individuals. Therefore, the scheme — which proposes that these forests be given the “protected forest” status (which will impact access to the forest and its resources); mentions the building eco reserves for tourists, and creating forest labs to attract scientists to conduct research and other such activities — will only get support and be successfully implemented if these tribal communities and individuals give their consent.

For instance, due to the traditional patterns of land ownership, where ever the lands are either owned by individuals or tribes, the state government has faced considerable hurdles in implementing the Coal Mines Nationalization Act, 1973; Mines and Minerals (Development & Regulation) Act, 1957; Mines Act, 1952; Forest Conservation Act, 1980; and the Water (Prevention and Control of Pollution) Act, 1974. All this is leading to over exploitation of the environmental recourses, which has had an adverse effect not only on the ecology but on the available means of livelihood for the present and future generation.

Some communities also assign a sacred value to these forests. In some places, the Lyngdoh clan protects the forest areas. According to their beliefs, the forest deity protects their village, and using the forests’ resources could incur the deity’s wrath.  These beliefs make the implementation of the tourism scheme more complicated.

Moreover, building home stays in forest areas that are owned by private individuals or tribal communities might not be profitable because it will not get the owners’ support.  Besides, these communities have a sustainable dependence on the forest resources. The village is well supplied with water and there’s an efficient sanitation system in place, but this can only support the locals. They plant trees, dig canals to harvest rainwater, take measures to reduce erosion, and use sustainable farming techniques. In essence, they use their environmental resources in a sustainable manner.  However, building home stays to bring in tourists would commercialise the area and create problems for these communities. Commercialising the place would increase the demand for things like electricity, water, and would require alternative methods of solid waste management. And all this when some villagers are already suffering from irregular power supply and recurring water scarcity during dry seasons.  The increase in tourists could also lead to a rise in prices of local commodities, which would make it difficult for the villagers to afford them. Therefore, the tourism policy should do away with its proposal of building home stays, eco reserves, forest labs in areas where the forests are owned by by private individuals and tribal communities.

The government should consider building these things in areas where forests are protected and the ownership lies in the hands of government, or areas which are well supplied with basic infrastructural facilities and services like water supply, electricity, and a solid waste management system. These places only can afford to be turned into tourist zones.

Further, officials of various departments such as the public health department, forest department, environment department, public works department have a direct say in the tourism policy formulation. However, none of the traditional government bodies like the village council, tribal councils were consulted. The government should, at least now, include representatives of these traditional bodies.

Local businesses in the tourism sector have been made 100% tax free, besides being given a lot of financial incentives. Due to their failure to consult the traditional authorities at the village level, they seem to be completely unaware that, because of the ill effects of tourism, the ecology of these places and the and health conditions of the people living there are deteriorating day by day.

Some districts in the state have also been experiencing unrest. This is believed to be the outcome of practices which have continued since the British Raj. Shillong was the capital of the undivided Assam province during the British Rule, until formation of the state of Meghalaya in 1972 after India’s independence, when it became Meghalaya’s capital.

Meghalaya’s tourism policy is quite ambitious in nature and ignores the constraints on the site. The policy offers a lot of incentives to filmmakers to come and shoot in the state, hoping to establish Meghalaya’s presence at the global level. This could, in turn, increase the prospects of large scale industries setting up factories in the state. This is when having even small and medium scale ones are also proving to be difficult.

Various state policies such as the Policy for Promoting Generation of Power through Non-conventional Energy Sources have absolutely no discussion in the tourism policy. It does not talk about the challenges that the policy will face and the strategies for tackling them. For instance, it completely overlooks natural renewable resources of energy, which could be beneficial and more sustainable for the state in the long run. It is only focused on short term goals.

Instead of convincing the community to allow tourists and make Meghalaya tourist friendly, it is more important to protect Meghalaya’s forest, its resources, and the community`s bond with it.

The tourism policy, on the other hand, is leading to over exploitation of natural resources, hurting the sentiments of the local communities (as their customary ways of land and resource management have been completely ignored), and is only concerned with immediate monetary gains. There is little merit in profit-making if it means sacrificing a community`s ability to protect and conserve the forests. But the scheme makes it clear that Meghalaya’s state government thinks otherwise.