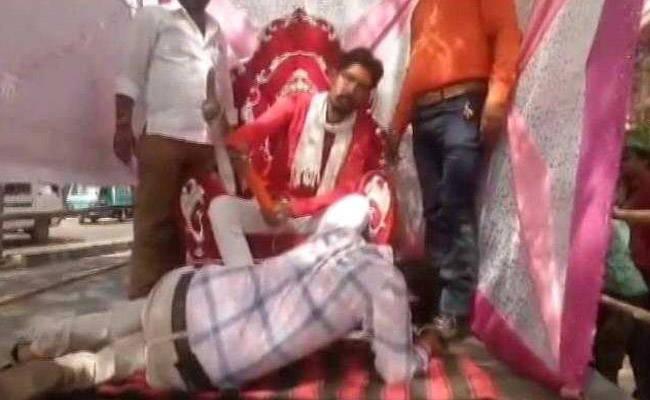 The tableau featuring Shambhulal at the Ram Nevami procession in Jodhpur

In a Ram Navami procession in Rajasthan, organised by the Vishwa Hindu Parishad, featured a tableau glorifying Shambhu Lal Regar — the man who hacked a Muslim labourer to death in Rajasamand and captured the gruesome act on video. Shambhulal featured along with Lord Ram and Sita, with a man masquerading as him sitting gloriously on a throne, holding a pick-axe and dressed in the same red shirt and white pants that the killer had worn in the video. At his feet lies a motionless body, meant to depict the victim Mohammad Afrazul.

The tableau has the text: “Hindu brothers wake up, save your sister or daughter.” It also features a photograph of its patron — Hari Singh Rathod, a co-treasurer of the Shiv Sena in Jodhpur, where the procession was held on Sunday.

Shambhulal has been elevated to the status of a hero for the Hindu hard right, having killed a Muslim labourer on allegations of "love jihad". Further, his embodiment as almost a God-like figure featuring in the procession is indicative of how the Hindu right is using Ram Nevami as an exercise to assert religious and political dominance.

Take the case of West Bengal, where the recent Ram Navami violence has snowballed into a political controversy. The centre on Wednesday sought a report from the state on the Ram Navami clashes in Raniganj and Asansol and offered to send in paramilitary forces. The Mamata Banerjee government responded with accusations of a “political conspiracy” behind the centre’s move of “ seeking an official report while offering help.”

Banerjee, who is in New Delhi and likely to meet Home Minister Rajnath Singh on Thursday, has placed the blame for the violence squarely on the BJP and Hindutva groups, saying that West Bengal has never before seen Ram Navami marches featuring weapons and arms. "Everyone is free to practice their religion. But carrying pistols and playing politics in the name of Lord Ram will not be tolerated,” Banerjee said.

The BJP, in turn, has accused Banerjee of playing politics and not being able to control the situation, whilst denying any involvement in the violence. The BJP has placed the blame instead on Banerjee’s TMC, with senior BJP leader Prakash Javadekar telling reporters that “peaceful Ram Navami processions were attacked by TMC ‘thugs’ in the state. Bengal is burning and Mamata is doing politics in Delhi. It is like Nero played the fiddle while Rome was burning.”

The violence has in the meanwhile spread to Bihar, with images and videos of saffron-clad marchers causing chaos leading to the imposition of curfew in Aurangabad. In West Bengal, the violence continues, with twenty shops burnt in Asansol town on Wednesday, prompting the district administration to clamp Section 144 in both Asansol and Raniganj. Three people were killed and over two dozen injured as clashes have spread across West Bengal including in Purulia, Murshidabad, West Bardhman, Asansol and Raniganj.

Politicians, however, remain engaged in a political tit-for-tat, with the Ram Navami marchers and their brand of Hindutva managing to assert dominance by taking the law into their own hands.

The Ram Navami processions themselves have swelled in size, number and overt saffronisation over the years. Sword and trident-wielding demonstrators are now a common feature, as are young children. They have a vocal agenda to “unite Hindus” and counter “growing jihadi forces.” It is common knowledge that they are largely organised and attended by BJP members, as the processions fit neatly into the party’s Hindutva heartland narrative.

The violence triggered by this year’s Ram Nevami marches in West Bengal and Bihar fall into a predictable pattern, with the BJP accusing the state government of failing to control the situation while denying involvement and claiming that the marchers were peaceful and had been attacked. Religion is used to appeal to the larger sentiment, and visual markers of a differing ideology — such as the statue of Maulana Azad that was pulled down amidst the violence — are overtly targeted.

The success of this strategy is only aided by an ineffective or absent counter. For instance, what has helped the BJP push its agenda of Hindutva into West Bengal is the Trinamool’s own form of confused identity politics. Banerjee has tried to assert a homogenous Bengali identity, including making Bengali mandatory in schools. Her criticism of the Ram Navami rallies as part of an “alien culture” further propagates a regressive narrative, made all the more confusing by the fact that the TMC tried initially to organise its own competing Ram Navami marches.

As a result of the confusing counter to the BJP’s Hindutva agenda, West Bengal has seen a number of communal clashes in the last few years, including the violence last year in Basirhat when a social media post on the Prophet led to clashes between Hindus and Muslims and the 2016 Dhulagrah violence where the two communities clashed following tensions between processionists and local residents.

The Ram Navami processions lie squarely within the same context of religiously motivated symbolism and violence being spurred on by one political faction and meekly and inadequately countered by the other. This year’s processions in Rajasthan, West Bengal, Bihar and elsewhere are the latest in the Hindu rights’ push to assert religious and political dominance, be it in the form of glorifying Shambhulal in Rajasthan or pulling down the statue of Azad in West Bengal.