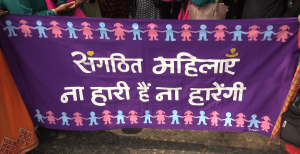 News is coming in that like every year, International Women’s Day on March 8 is being marked by giant corporations, governments of various shades, NGOs and charities, and of course, celebrities from Bollywood to Hollywood, and studios in between. Mac Donald’s has decided to upturn its brand sign of two arches (so that it looks like a "W") globally to show its adherence to the women’s cause. In New York, 34 giant companies like Morgan Stanley, Proctor & Gamble etc. lit up their skyscraper offices with the women’s symbol “to push for equality in the workplace”. Prime Minister Modi is off to Jhunjhunu in the Shekhawati region of Rajasthan to inaugurate a programme for saving the girl child and educating her. Myanmar’s Aung San Suu Kyi has called for enhancing women’s rights. Google has put up a doodle. Barbie, the doll making company, has released a new line of "history-making" dolls. Newspapers in India have front pages in pink, and one Hindi mass circulation daily even has put out a scented edition.

Isn’t all this good, another step in the direction of women’s equality? Isn’t a powerful message rippling out and making a difference?

Many years ago Naomi Klein, author and activist had pointed out that the rulers invariably adopted, coopted, and accommodated within their own sprawling empire, symbols of protest and resistance, or even identity. She was talking about companies. What is being seen today is much larger – the cooption of global ideas in order to turn them into the very opposite. By doing so, the real essence of these occasions or symbols is blunted, denigrated, and ultimately turned into scaffolding for the system. This is what has happened with the Women’s Day. To understand that, look at how it started.

It was 1910 and in Copenhagen, the second International Conference of Socialist Women was being held. It was being attended by over 100 women from 17 countries, representing unions, socialist parties and even some elected representatives. Clara Zetkin, a well-known leader of Germany’s Social Democratic Party (which was then a revolutionary party, quite the opposite of today’s neo-liberal collaborator) proposed that an International Women’s Day should be observed.

The conference was not just any women’s meetup. The invitation for it had said, “We urgently call on all the socialist parties and organisations of socialist women as well as on all the working women’s organisations standing on the foundation of the class struggle to send their delegates to this conference.”

Clara Zetkin herself had earlier written in her party’s women’s magazine that “bourgeois feminism and the movement of proletarian womenare two fundamentally different social movements” pointing out that bourgeois feminists wanted reforms through struggle between sexes and against men without raising a voice against the capitalist system while working women wanted to defeat capitalism by fighting with men of their class against the ruling capitalist class.

This was not just some airy-fairy theorising. Preceding years had seen a tide of women’s struggles in Europe and the US. In 1908, 15,000 women had marched in New York City demanding shorter hours, better pay and voting rights. In 1909, at the call of the Socialist Party of America, National Woman’s Day was observed on 28 February.

After the Copenhagen call, International Women’s Day was observed on 19 March in 1911 in Austria, Denmark, Germany and Switzerland. Over one million women and men attended rallies demanding women's rights to work, vote, be trained, to hold public office and end discrimination. On 25 March, 123 working women and 23 men, most of them Italian and Jewish immigrants died in a fire in a New York garment factory. This event suddenly brought in to focus the plight of women workers and provided impetus to their movement. 1911 also saw women's Bread and Roses campaign and textile strike in Lawrence, Massachusetts, which many years later inspired the Joan Baez song of the same name.

The Women’s Day protests continued to spread on the eve of the First World War in many European countries, including Russia. In 1913, the day was shifted to 8 March, which it has remained since then. In 1917, the Women’s Day was marked by a massive strike of women workers which went on for four days and ultimately widened into an uprising that overthrew the Tsar (called the first or the February Revolution, to be followed in October by the Socialist Revolution; months are named after Gregorian calendar).

This brief recap of the history shows that the International Women’s Day was initiated and observed as a protest against capitalism by women and men right from the beginning. It continued to be a day marking the struggle of working women against all forms of exploitation and to press forward for a socialist society, which would include the emancipation of women.

It was only in 1977 that the UN declared 8 March as the United Nations Day for Women’s Rights and International Peace. And various governments started observing it in their own ways, focusing on this or that "women’s issue". Gradually, the true revolutionary essence of this occasion was eroded. Only the Left marks it still as a day of protest against exploitation and violence, although in an effort to broadbase the appeal, this too has become diluted. Not that women’s exploitation and oppression has become less today but protests against it have got befuddled with bourgeois "feminism" and even – as in India – with RSS type "nari shakti" (women’s power) conceptions.

The companies that are marking Women’s Day pay less to their women employees, have very few women bosses, and brutally exploit women workers. Govts. that are waxing eloquent on women’s rights (like our own Modi sarkar) have no thoughts to spare on abysmal women’s employment and low wages in their own countries. NGOs and charities ignore the real reasons of women’s suffering and focus on vacuous generalities. Beware of these faux women’s right upholders.